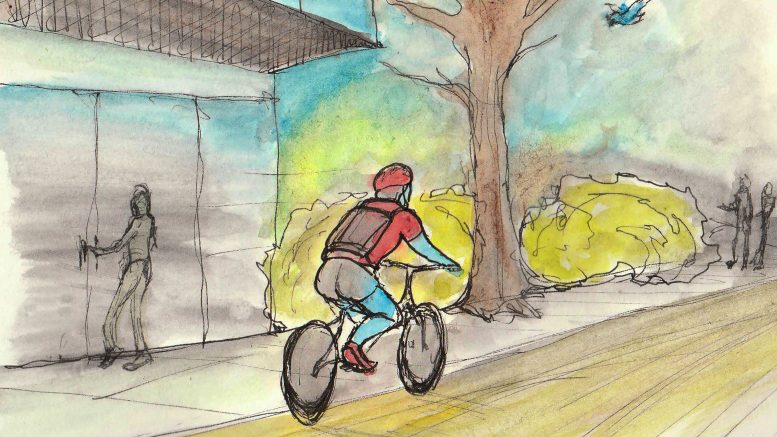 Environmentally conscious people often encourage individual action to reduce greenhouse gas emissions. While many people are aware that living a sustainable lifestyle will not be enough to solve global warming without a systemic movement away from fossil fuels, doing so is a matter of principle for some. Leading by example should never be discouraged, but those who want to reduce their carbon consumption must consider that their socioeconomic privilege may give them an opportunity to transition to a greener lifestyle which many of those who continue to engage in carbon-consuming habits do not.

Any lifestyle change is expensive, but when our cities are designed to encourage high carbon output, it makes this transition particularly difficult to bear. Most everyday carbon consumption comes directly from the necessity of driving and the natural gases we use to heat our homes. When our dwellings are retrofitted with gas-consuming heating systems and the cheapest housing options are far from the city centre, many people have no option but to accept that they may not be able to afford a carbon-neutral lifestyle.

You would think, considering the current climate crisis, that municipal governments would be more focused on reducing new developments’ dependency on vehicles and dirty heating systems, but the vast majority of new neighbourhoods are sprawling outward from the city centre, have little access to bus routes and suffer a notable lack of amenities, which further pushes people to drive long distances.

From 2001 to 2021, Winnipeg’s population grew by 132,906 people. In 2001, the metropolitan area extended 328 square kilometres. By 2021, although the population only grew by 19 per cent, urban sprawl grew by 41.5 per cent. Meanwhile, overall city density dropped by nearly 13 per cent. These numbers indicate more people are living further away from everyday amenities and are more dependent on cars than ever before.

Research has shown that in high amenity-dense neighbourhoods in Winnipeg, most residents choose to commute by biking, walking or using the public transit system. Due to their close proximity to amenities and services, 55 per cent of residents in these high-density zones follow sustainable lifestyles, whether they are conscious of this fact or not. For comparison, only 18 per cent of people situated in low amenity-dense neighbourhoods opt to walk, bike or bus.

Since 2001, 89 per cent of housing developments have been low-density neighbourhoods. This kind of city planning has radically hampered Winnipeg’s goal to reduce greenhouse gas emissions 20 per cent by 2030 relative to 2011 levels. As a result, in 2018 the city announced its plan to improve density by making infill projects in urban settings 50 per cent of the city’s residential development focus by 2030.

Unfortunately, infill developments have their own environmental and social impacts. When the city chooses to demolish older buildings in central neighbourhoods in order to replace them with expensive and environmentally conscious buildings, it isolates lower-income people from accessing these neighbourhoods and pushes them further from the city. In other words, higher-income people may move back into the city, but by hollowing traditionally low-income areas out of affordable properties, these developments simultaneously force more desperate folks out and force them to rely on high-carbon lifestyles. This is the most troubling paradox of building green.

Further, gentrification does not always lead to a simple move from urban to suburban settings — it perpetuates houselessness, too. Take Vancouver as an example: although it is one of the leading green cities in the world, environmentally conscious gentrification — though not the only cause — contributes to a housing crisis that is out of control. The lack of affordable housing in Vancouver has made it one of Canada’s leaders in houselessness rates per capita.

So, the market logic that many municipalities function under produces a double bind — either help ameliorate the housing crisis by developing affordable housing that encourages pollution, or develop greener neighbourhoods that make the housing crisis worse and segregate low-income people from vital resources. As retired Vancouver city councillor Andrea Reimer reflected after her 10-year career with the city, “you can’t solve the worst problems of capitalism with more capitalism.”

The climate crisis may be the best reason for socializing housing. Winnipeg must look beyond traditional market strategies to address these issues together and reduce the inequality. This means the city must take it upon itself to build affordable and climate-friendly housing for low-income earners in high-density neighbourhoods. Alternatively, for people with a natural preference for suburban settings, the city must ensure that developments are designed to be self-sufficient, with a high number of amenities to incentivize clean transportation. Going forward, housing cannot have space for private profit.