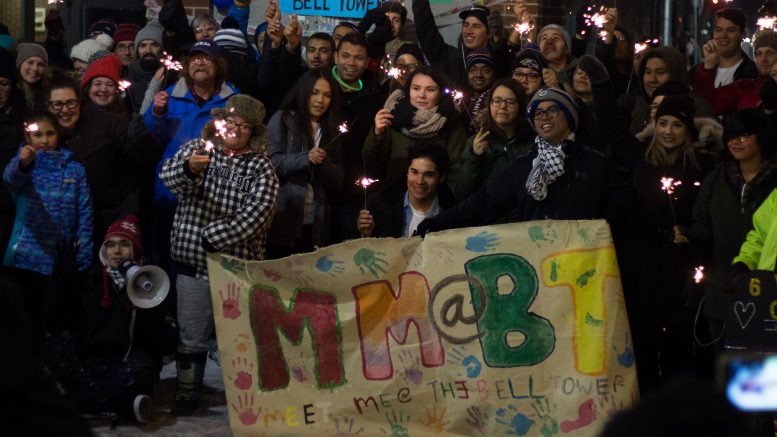 On Friday, Nov. 17, Meet Me at the Bell Tower celebrated its six-year anniversary.

Since 2011, every Friday evening – rain or shine – North End community members have rallied next to the bell tower at Selkirk Avenue and Powers Street to tackle a range of issues including child welfare, violence, racism, and reconciliation.

MMBT is a weekly event organized by Aboriginal Youth Opportunities (AYO) that intends to reconstruct Winnipeg’s North End by uniting the youth voice in addressing neighbourhood and safety issues.

When MMBT was first established, it was driven by residents of the community. Since then, AYO has been able to create momentum by raising the profile of the weekly rallies around the larger Winnipeg community.

Many organizations like the Winnipeg chamber of commerce, Winnipeg Labour Council, and Islamic Social Services Association have taken part in co-hosting the weekly rallies.

Another area of MMBT that has evolved over the years is its passion to focus on research and evidence-based solutions.

In 2014, University of Winnipeg master of theology student Adel Compton examined the spiritual implications attached to a gathering like MMBT in her thesis “Renewed Spirit in Winnipeg’s North End: An Emerging Aboriginal Young Adult.”

More recently, Jason Syvixay, a master of city planning student from the University of Manitoba, wrote his practicum on the relationship between protest and city planning.

Syvixay used MMBT as a case study to urge city planners to view the work of engaged citizens as an opportunity for feedback, dialogue, and change.

Michael Redhead Champagne, a celebrated Winnipeg-based humanitarian, founder and organizer of AYO, and co-founder of MMBT, highlighted the importance of these weekly rallies and noted the focus is on solutions rather than just the problems.

“When we started, we called ourselves an anti-violence rally. And over time, we learned from interacting with the community about how important it is for us to be solutions-oriented,” Champagne said.

“And so now anytime we talk about stopping violence, in the same sentence we will always include building community because we want to emphasize our solution and not just the problem we’re here to solve,” he explained. Champagne said that MMBT was “inspired by a group of Indigenous young ladies, from the neighbourhood here, between the ages of 12 and 14, who organized an anti-violence rally in honour of Clarky Stevenson.”

Stevenson was 15-years-old when he was killed in a gang-related stabbing in the fall of 2011 as a result of a feud between two street gangs.

“When violence continued after that particular incident amongst young people,” Champagne said, “the youth of the neighbourhood stood up and said we need to stop the violence on a much more consistent basis instead of waiting for something bad to happen and then reacting.”

“In November – specifically November 18, 2011 – was our first rally that happened just across the street at the bell tower,” he added. Despite the cold weather that day, nearly 40 community members participated in the rally.

“Everyone said they didn’t want to wait for another bad thing before we got together and that’s when our weekly status began.”

Champagne said he hopes that the growth of MMBT is indicated and reflected by continued citizen engagement in the North End.

“Myself and members of Aboriginal Youth Opportunities are helpers and conveners of the bell tower but we’re always responding and trying to be as responsive as we can be to the needs of our community,” he said.

“It’s the residents of the north end that will determine the direction of Meet Me at the Bell Tower in the future.”

The herd swims into podium finishes

Leading phenomenologist and social critic visits U of M