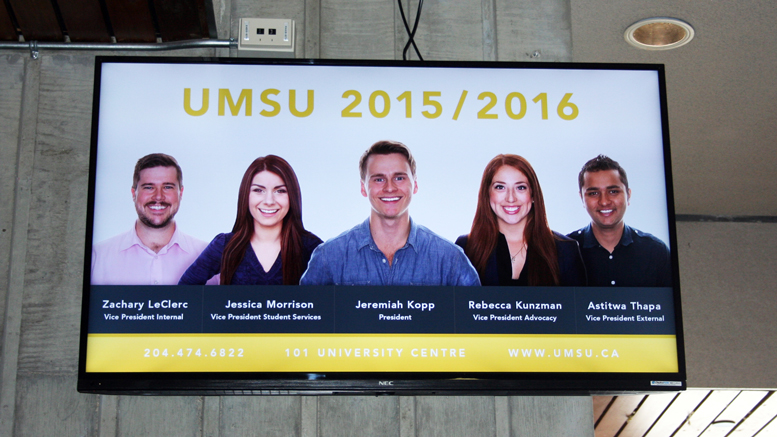 The policy would have granted students who had previously dropped a course a chance to register only after all new registrants had enrolled – meaning courses that filled up early could become perpetually unavailable. This was meant to curb the growing number of course drops, which totalled nearly 20,000 annually over the last five years.

Understandably, the policy was seen as overly punitive for those who had previously dropped a course for legitimate reasons and sought to retake it.

As such, Kunzman sprang into action. In collaboration with then Arts Student Body Council senator Allison Kilgour, she put together a survey to gauge student opinion and compiled a thorough document outlining alternative policy options.

Together, the two corralled faculty members on the U of M senate to delay the motion. In February, their efforts resulted in the changes being delayed for another year – and effectively quashing the original scheme.

This was a big win for UMSU, built on the kind of bread-and-butter advocacy typically associated with unions of all stripes.

But the quiet dignity and importance of this work stands out in a year otherwise plagued by carelessness and unaccountability on the part of the union’s executive.

Time and again, students have seen the union shrug its shoulders in the face of cuts and fee hikes on the part of the university’s administration. Indeed, the union itself has added considerably to the cost of university through increases to select UMSU fees.

Members of the executive have also shown poor judgment, with recent revelations of $14,000 in allegedly unapproved expenses racked up on a union credit card being only the latest example.

An inventory of the controversies and missteps of the last couple years demonstrates that UMSU no longer functions the way a union should. The union has lost sight of its role as an advocacy organization.

In November 2014, the Manitoban first reported that the U of M was planning across the board cuts to its operating budget of four per cent in each of the next two years.

The university maintained that cuts were necessary due to restrictive tuition policy, whereby fees are capped at the rate of inflation, coupled with modest operating grants from the provincial government. In conjunction with increases to faculty salaries and deferred maintenance costs, the U of M crafted a narrative of dire fiscal calamity.

I have argued previously that campus unions spend too much time inventing convoluted ideological reasons to fight tooth and nail for the interests of their already incredibly privileged members. This conflation of ideology and boundless rational self-interest has ensured that many unions are out of touch with reality. But at least they still advocate on behalf of their members.

In contrast, UMSU argued that it was better to remain effectively neutral on the budget cuts issue, like virtually everything else regarding the administration.

“My view of UMSU’s role is one of a mediating and clear voice to cut through various political interests,” said Jeremiah Kopp, then vice-president internal, in December 2014.

When the budget eventually came down, it featured $14.4 million worth of cuts out of a $701 million operating budget. On top of that, $7.6 million in new revenue was generated through increases to international student tuition.

Once again, the union’s response was distinctly muted, with now-president Kopp saying only that UMSU would pressure the university into remaining firm in its commitment to “take at least a portion of the increase and make sure it gets dedicated to international student support services.”

This is part of a pattern when it comes to UMSU’s relationship with the administration.

The union supported the $56.25 per term sports and recreation fee without a referendum even while students at the University of Winnipeg voted in a referendum in 2011 to pay a fraction of the cost for a similar service. More recently, Kopp supported U of M parking services in its push to increase tickets in line with those charged by the City of Winnipeg. Similarly, there has been little to no advocacy regarding increases in rent and meal plan rates for campus residences.

And instead of saving students money, the union has consistently added to their financial burden.

In the summer of 2014, UMSU signed a five-year contract with StudentCare, a for-profit insurance broker that specializes in securing group health and dental insurance plans at post-secondary institutions.

StudentCare replaced the Canadian Federation of Students’ (CFS) broker, which had typically secured Green Shield as the insurance provider for students at the U of M.

Kopp portrayed the switch to StudentCare as a means of providing a fixed health and dental fee rate for the duration of the contract.

What transpired was the exact opposite, legitimizing criticism that the union chose StudentCare primarily to thumb its nose at CFS while collecting $10,000 per year in sponsorships to fund events like Frosh Fest.

In August of last year, the union unceremoniously announced that rates would increase by $45.25 per student due to an unexpectedly high number of insurance claims. StudentCare, which failed to keep rates stable for 2015-16, will now be renegotiating rates in each of the next three years.

The University of Winnipeg Students’ Association, which continues to use the CFS broker, provides a significantly cheaper plan for students. A full-time single student entering university in the fall pays $204.60 annually compared to the UMSU rate of $292.

But perhaps the most egregious development over the past year was the concerted effort to push UMSU council into supporting a $64 hike in union fees without a referendum and without any significant consultation.

The $64 increase is going toward some arguably worthy projects. These include more child care, indigenous scholarships, undergraduate research, and renovations to University Centre.

But it is completely unacceptable for the union to approve such a substantial fee hike without a referendum. Moreover, Kopp presented the fees to the university’s board of governors as a “donation” to the U of M Front and Centre fundraising campaign without running it by UMSU council. He has since said that the donation issue will come back to council, but it remains to be seen when that will happen or what it will look like given that the university’s board of governors has already approved it.

Amazingly, only two UMSU councillors voted against the motion to increase fees by $64. Kopp later publicly insinuated that one of those councillors was a racist.

Anyone who has regularly attended UMSU council meetings this year can attest to the union’s increasingly toxic atmosphere.

Debate is shut down. Closed sessions are commonplace. Routine updates by executives seem to go on forever, with the tactical advantage of thinning out the crowd before debate begins on controversial motions.

Indeed, playing fast and loose with the rules seems to have become UMSU’s modus operandi.

When the union needed cash for Frosh Fest in September, it simply hit up the University 1 Student Council for $40,000 – its entire annual remittance – in exchange for some tank tops and gift cards.

If that weren’t enough, the agreement was clearly invalid based on the union’s bylaws. Only one signing authority from the union consented to the contract and UMSU council did not approve the agreement. While the issue has since been rectified, Kopp has said that these contracts were commonplace in previous years. In one of those years, U1SC sponsored Frosh Fest to the tune of $70,000, thus dipping into remittances for later years to be counted as debt owed to the union.

Even with sponsorships from student councils, Frosh Fest contributed $76,000 to a roughly $300,000 budget deficit this year.

Finally, there’s the $14,000 worth of allegedly unapproved expenses that Kopp racked up on his union credit card. His total credit card expenses amount to $29,000 – more than I imagine most students make in a year, and far more that I’ve been paid as an editor for the Manitoban.

These expenses – which include thousands of dollars for items such as upscale dinners, hotel movies, and booze (as well as a $900 cash withdrawal) – are indicative of a culture of entitlement at UMSU that extends far beyond Kopp.

Though he is often the public face of these issues, Kopp is one member of a five-person executive team. And the obligation to hold this executive to account falls on the shoulders of UMSU council.

Indeed, it is instructive how UMSU council dealt with the expense issue at its meeting on March 24. After a closed session in which the union’s general and accounting managers made a presentation, council voted to cancel a previously agreed-upon forensic audit – and apologize to the student body saying the original motion “took no consideration for the effects on various council members’ reputations.”

In short, this poor oversight and opportunism is clearly out of step with how an actual union should operate. Kopp is an affable guy, but in the time he has left, he should admit that mistakes have been made and launch a concerted effort to reverse UMSU’s deepening institutional rot.