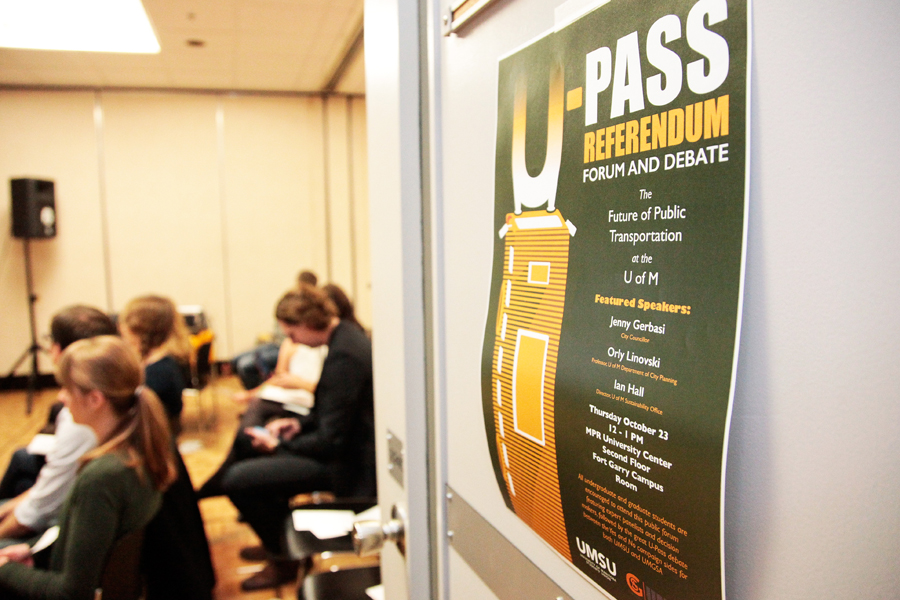 In light of the upcoming referendum in which students will vote to determine the outcome of the universal transit pass (U-Pass), the U-Pass referendum forum was held to shed some light on the evidence and issues on each side of the debate. The Manitoban, University of Manitoba Graduate Students’ Association (UMGSA), and the University of Manitoba Students’ Union (UMSU) collaborated to host the forum about the future of public transportation on campus.

The vote
On Oct. 28-30 and Oct. 29-31, respectively, UMGSA and UMSU members will be eligible to vote on the U-Pass. The University of Winnipeg Students’ Association (UWSA) is also holding a referendum in conjunction with UMSU and UMGSA. Voting opened for UWSA members today, and members have the opportunity to cast their ballots on Oct. 27-29.

The outcome of the comprehensive referendum process will ultimately determine whether or not the U-Pass will be implemented, providing for UMSU, UMGSA and UWSA members of post-secondary institutions across the city.

Two executive terms ago, the first referendum—which involved only UMSU, at the time—gauged the will of the student body to buy into the U-Pass program. Seventy-four per cent of U of M students voted in favour of the U-Pass at the originally proposed rate of $170. Due to proposed rate increases since then, students will vote once again to determine the outcome.

“All UMSU members will be eligible to vote in the referendum. Nearly all undergraduate students at the University of Manitoba are UMSU members. If you paid fees to UMSU on your university fee statement, you are an UMSU member and are entitled to vote,” according to the UMSU website.

“Regardless of your opinion on the U-Pass, UMSU encourages you to come out and vote and make your voice heard!”

The UMSU website previously read that, “UMSU is currently lobbying the City of Winnipeg, the Government of Manitoba, and the University of Manitoba to invest in the U-Pass to ensure that the cost to students is within the amount established by the U-Pass referendum.” At the time of publication, that content had been removed from the website.

“We had been lobbying to try to get [the U-Pass] to that $170 price point. The price the city gave us was $260, and at that point the lobbying ends,” UMSU president Al Turnbull told the Manitoban in response to the content changes that were made online.

“We won’t act until after the referendum – now it’s in the students’ hands,” Turnbull continued. “We will see if the price point passes. Once that passes, we will lobby again to ensure that [the city upholds] that price. Once the city council had agreed that they would support it, I think that the lobbying now can continue until we’re done.”

The site presently reads that, “UMSU Council voted on September 29 to hold a referendum, in keeping with the motion put forward at city council, on a $260 U-Pass.”

Councillor Jenny Gerbasi and former Mayor Sam Katz made a motion to city council to include the U-Pass proposal in the City of Winnipeg’s operating budget. At a price point of $260 plus inflation per student, the motion to support the U-Pass was passed—at least in principle—by city council on Feb. 4, 2014.

“The universal transit pass (U-Pass) is a transit pass that would give eligible students unlimited access to Winnipeg Transit services for fall and winter academic terms (September-April) for a set price,” according to information on the Canadian Federation of Students-Manitoba website.

Students would receive these passes at a rate—comparable to other institutions nationally, and at cheaper rates for Winnipeg students—established through collective purchasing and government subsidies. The U-Pass has already been implemented in other Canadian cities, including at least 30 universities and colleges across the country participating in a U-Pass program.

The U-Pass forum
The Manitoban, alongside UMSU vice-president Christian Pierce and UMGSA president Laura Rempel, welcomed student participants, featured guests, and the spokespeople campaigning for or against the U-Pass to the forum in University Centre last Thursday.

The guest panel featured experts and decision-makers with the capacity to influence the implementation of the U-Pass. The panel included Gerbasi, re-elected last week as city councillor for Fort Rouge-East Fort Garry; Ian Hall, director at U of M office of sustainability; and Orly Linovski, assistant professor of city planning at U of M.

The authorized representative from UMSU for the Yes side campaign was Sarah Gerbasi, and there were no registered No side candidates. The UMGSA campaign representatives for the Yes side were Dan Penner, master’s student in the faculty of architecture’s department of city planning, and master of chemistry student Temilolu Idowu.

The expert panellists were requested to speak to the question of the U-Pass, and provide students with their knowledge about it and the pros and cons grounded in evidence-based research. Following the expert panellists, representatives from the Yes and No sides of the U-Pass debate presented about their campaign position on the U-Pass. The event then proceeded to voting information and question period.

Students were invited to write down questions on index cards provided upon arrival at the forum and specify who they requested to answer the question; or panellists who had a response provided them. Pierce and Rempel were also on hand to provide insight from their position on their respective councils.

The experts
The forum organizers justified extending invites to these particular expert panellists on the basis of providing different approaches to the question of the U-Pass and evidence-based research from the various perspectives.

The first speaker, Gerbasi, spoke from her position to direct the implementation of the U-Pass at the political level and negotiate with Winnipeg Transit and vested parties. Councillor Gerbasi represented a voice from Winnipeg City Hall in her capacity to convey her support for the U-Pass to other city councillors, previously to former mayor Sam Katz, and now, to mayor-elect Brian Bowman.

In terms of her vision for the city, Gerbasi’s campaign website reads that, “Jenny supports a focus on high-priority community transportation needs and social amenities, such as fixing existing roads and sidewalks and future expansion of rapid transit including active transportation (walking and cycling) and developing a sound financial plan to make this a reality. Jenny is committed to championing the establishment of programs such as the U-pass for students as well as investing in public transit to make our city more accessible and sustainable and improve quality of life.”

In a report from Gerbasi on the final budget recommendations to city council for this year she wrote that, “The long term benefits of this will be developing a culture of life-long transit use, increased ridership, affordability, decreased congestion, and green house gas reductions.”

Hall, the second speaker, provided a voice to represent the local university community from the Office of Sustainability.

According to the U of M website, the “strategic vision for action plan” launched by the Office of Sustainability in 2012 marked “a significant milestone in the university’s efforts to improve sustainability and operate in a way that respects and supports our environment. In an effort to become a leader in this regard, the University of Manitoba Sustainability Committee has developed a comprehensive action plan that sets out a number of goals and actions with respect to campus operations, planning and community engagement.” This plan was based on “ideas and feedback received from the university community.”

The Office of Sustainability is working towards “a campus that promotes safe, sustainable and accessible transportation options to students, staff, faculty, and the university community,” read Hall’s presentation.

Hall provided information about the various modes of transportation and statistical trends based on students’ use of private vehicles, transit, cycling, and as pedestrians. The 2014 student population on campus totalled 29,648 students, as reported by Hall. Evidence from the Office of Sustainability shows that 33.6 per cent use transit, 31.5 per cent drive only, 20.2 per cent bike, 10.5 per cent carpool, and 4.2 per cent walk.

According to Hall, about 65 per cent of students travelled less than 10 kilometres. The average distance travelled by students in Winnipeg and across Manitoba was just over six kilometres.

Hall presented that the number of driving commuters would be reduced therefore reducing the struggle for parking. With a total of 6,500 parking spots on Fort Garry Campus, there are 3000 permits available for students on 2340 spots at a rate of $67 per month. Only 26 per cent of parking stalls are for casual parking with 1690 spots at rates varying from $5-11 per day. There is no student parking for the Bannatyne campus.

The transit trends presented by Hall showed that more students are using transit now than in earlier years. In terms of transit arrivals on campus, an average of about 9,700 students rely on transit to arrive to campus daily. Hall reported that those numbers are typically “higher in winter” and “lower in summer.”

Hall also presented about the capacity of transit in regards to citywide on-time performance and accessibility. On average, he reported that 75 per cent of buses ran on time, 15 per cent ran late and 10 per cent were early. Winnipeg Transit estimated that 90 per cent of Winnipeg households are within 400 metres of transit routes.

The third guest panellist, Orly Linovski, spoke from a city planning perspective. Rempel justified the organizers’ decision for hosting Linovski, telling the Manitoban that a city planner would provide an unbiased and critical evaluation of the implications of the U-Pass at the city-level.

Her presentation stated that “unlimited transit access programs are widespread across Canada and North America.” According to Linovski, the benefits of the U-Pass are to reduce parking demand, increase public transit ridership, and increase transportation equity.

In terms of parking, Linovski pointed out that fees do not typically factor in the costs of building and maintaining parking.

Linovski presented evidence from other cities which demonstrated that U-Pass programs are usually associated with increased ridership. She explained that the implications for this are reduced fares, improved transit service, “more familiarity with [the] transit system,” and “more groups travelling together.”

Linovski also spoke about the potential equity benefits achieved “through access, affordability, and possible service improvements.” The benefits are likely to impact non-drivers, those who “tend to be lower income,” are “transportation disadvantaged,” and will generally “improve basic mobility,” Linovski reported.

The limitations of the U-Pass were addressed by Linovski, who said that “transit quality impacts ridership—though not as much as you would expect—[and] service should be increased to accommodate higher ridership.”

Inaction on Churchill rail a dereliction of responsibility