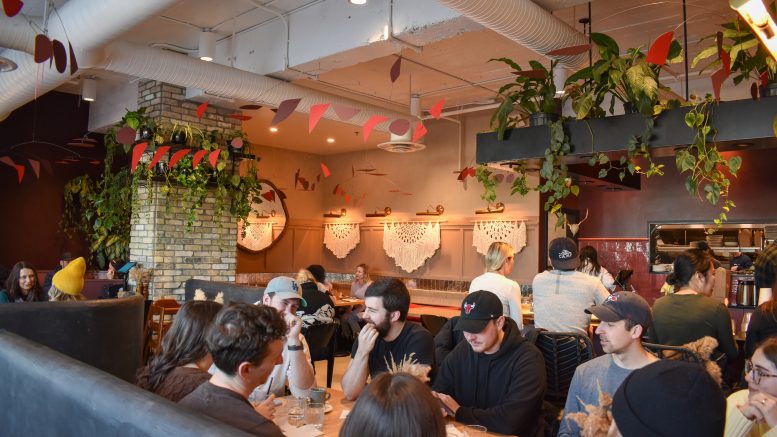 Juneberry is presently one of Winnipeg’s trendiest brunch places, and Winnipeggers are flocking to Old St. Vital to fortify themselves with the power of full-bodied coffee under kitschy wallpaper.

This much ado is not about nothing. I have visited the restaurant three times — in the summer, fall and again over the winter break — and in those visits Juneberry has cemented itself as one of my personal favourite destinations for brunch in the city.

Juneberry’s menu of caffeinated drinks is small but formidable. The raspberry matcha latte confirms my theory that matcha and fruit combinations are woefully underrepresented and underrated in the culinary industry. Tart raspberry flavouring compliments the more subdued notes from the matcha very nicely.

Brunch-goers who are less inclined to experiment with unconventional flavour combinations will have more than enough to tide them over. Juneberry serves Gimli’s own Flatland Coffee blend piping hot.

My new favourite item from Juneberry’s menu since visiting again over the holidays is the Honduran baleadas. The dish is served in a soft tortilla with egg, refried beans, avocados, a bit of shaved ginger and patrons’ choice of spiced sweet potatoes or steak.

Plated with summery greens, yellows and oranges bursting out of the tortilla, the baleadas are as much a treat to look at as they are to chow down on. The pop of pink crunchiness from the ginger is a warm and bright complement to the baleadas’s mosaic of subdued savoury, sweet and nutty flavours.

I am still daydreaming about this dish weeks later.

Besides the baleadas, the sweet potato latkes strike a tricky balance of crispiness on the outside and softness on the inside which I have never mastered in my own shameful attempts with the recipe. The latkes’ portions are a little stingy though, especially relative to other items on Juneberry’s menu, so the decision to label the latkes an entree is perplexing.

Juneberry’s eggs Benedict distinguishes itself despite the ubiquity of eggs Bennies on every brunch menu in existence. The hollandaise sauce is creamy and smooth, but what really pulls me in is the addition of delectable caramelized onions.

The beef short rib grilled cheese is a testament to the creative potential of sandwiches. The inclusion of horseradish aioli really elevates the recipe from an eye-rolling twist on grilled cheese to a special dish with its own identity.

For dessert, I highly recommend making room for the apple fritters. Juneberry serves them with a heavenly honey labneh nonchalantly smeared against the side of the bowl, along with a rich caramel drizzle. The labneh’s presentation belies its life-changing impact.

Juneberry’s menu evolves a little with time. The one and only disappointment I’ve had through those changes was with an earlier form of its signature pancakes served with the option of chocolate ganache.

The ganache was a glossy dark chocolate, with very little else provided by way of sides or sauces. Because the ganache was extremely viscous and layered between each pancake, it effectively glued the cakes together.

What is more, the ganache was then poured over the top of the stack such that it demolished all other flavour profiles and breached the unthinkable too-chocolatey threshold.

If this pancake topping is ever revived, I think a salty side, or even a different hydrating sweet like some fruit would offset desertifying effects of the ganache onslaught. As it stands, the recipe has been tweaked and the ganache is no longer offered.

There is one major hurdle standing between Winnipeggers and brunch at Juneberry, and that is Winnipeggers’ monstrous enthusiasm for brunch.

The restaurant only takes reservations for parties of six or larger, and any smaller groups must check in on a wait list before going in. I’ve visited in summer, fall and winter weather and have never not been seated swiftly without that six-person minimum reservation.

The rules are understandable, though, as the restaurant follows a formula that Winnipeggers clearly find irresistible. Impulse reservations and no-shows would clog up the tables that people like you and I need to hold our fritters.

Juneberry is open from 9 a.m. to 3 p.m. Wednesday through Monday.

Bison Football gets their man