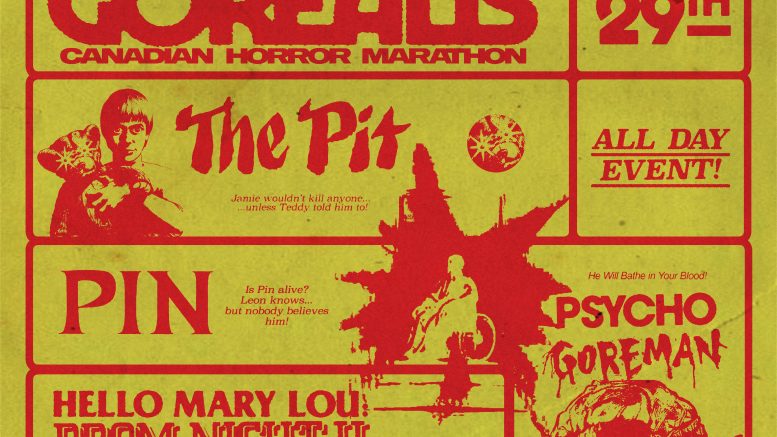 By Damien Davis | Image by provided by Cinematheque October 25, 2022

Aurora Gorealis: Canadian Horror Marathon returns Oct. 29 at the Cinematheque for another spine-chilling year, with a lineup of four more films to frighten moviegoers just in time for Halloween.

The theatre itself is a part of the Winnipeg Film Group, a non-profit centre for artist-run film education, production, exhibition and distribution.

Olivia Norquay, programming co-ordinator at the Cinematheque and one of the organizers for Aurora Gorealis, told the Manitoban that the marathon format had just started last year. Prior to this year, the Aurora Gorealis had films playing throughout the month rather than all in one sitting.

“Last year we decided to shift the series into more of a marathon rather than a month-long series just to test it out and because we’ve never really done a marathon before,” she said. “I just like the idea of people hanging out at the cinema all day.”

Norquay and Jaimz Asmundson, the programming director at Cinematheque, curated the films for the marathon together. The lineup features The Pit (1981), Pin (1988), Hello Mary-Lou: Prom Night II (1987) and Psycho Goreman (2020) — all Canadian-made films.

Other than following the mandate of the Cinematheque to feature Canadian filmmakers and films, Norquay said that she felt it important to bring new eyes to films that are “underseen” and “maybe underappreciated.”

“There’s also a history of these Canadian tax shelter films,” she said. “There’s a lot of really interesting, weird, wacky stuff being made in the ’70s and ’80s just because it was so cheap to make films in Canada at the time.”

Canadian tax shelter films are movies made from 1975 to 1982, during a time where the federal government allowed investors to deduct their entire investment into Canadian feature films from their taxable income. This created a large uptick in Canadian film production and is now known as the “tax shelter era.”

“There’s a lot of filmmakers who were able to get away with a lot of crazy shit,” Norquay added, “so I want to feature it, I think it’s interesting.”

“We also really like to feature local filmmakers. So as part of the shorts that are going along with the features in Aurora Gorealis, I think it’s really important to feature Winnipeg filmmakers.”

When asked if the marathon was something that would return in the future rather than going back to its month-long format, Norquay said she “liked the idea of having a marathon.”

“I just think it’s kind of a fun gimmick in a way, and I feel like with certain series it sort of takes a few times for people to catch on and realize what we’re doing,” she said.

Other upcoming events the Cinematheque is hosting include the Saturday Morning All-You-Can-Eat-Cereal Cartoon Party: Halloween Edition. From 10 a.m. to 1 p.m. you can watch retro cartoons, commercials and Public service announcements as you indulge in as many bowls of cereal as you can handle.

Aurora Gorealis starts at 3 p.m., Oct. 29 at the Cinematheque. For information and tickets, head to winnipegfilmgroup.com/cinematheque/.