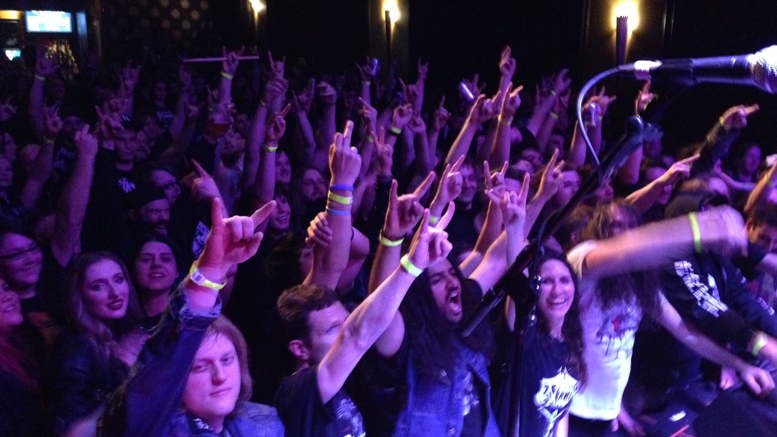 “From Endless Chaos, you can just expect a ton of energy, lots of headbanging. We always try to bring the best out in our crowd,” guitarist Mike Menza told the Manitoban.

Thomas told the Manitoban that though he has attempted to fundraise in the past, benefit shows are still relatively new to Metalfest.

“The way I do the festival, I’m a one-man show, and if you wanna get grants or anything like that from the government, you have to be a not-for-profit organization. Not that we make any profit putting the fest on,” said Thomas.

“They want a board of directors, and meetings, and minutes, and all that stuff […] Even the grants that I can look into getting because I’m not an organization, they give all that money to jazz and classical musicians.”

Thomas added that, like the festival, he aimed to pick local bands working hard in Winnipeg’s metal scene to play the benefit.

“I heard about [local death/thrash metal act] Perilous from a bunch of friends going ‘hey, this band’s awesome, they’re an up-and-coming local band, got a good buzz going,’ so I put them on the bill,” said Thomas.

“Infecter is my band […] Since we’ve got a good buzz going because we’re a new band on the scene, I think we’ll help the benefit a lot. Endless Chaos, like you said, those guys are awesome and killing it with that Wacken battle – they almost made it to Wacken [Open Air].”

Thomas was referring to last year’s Wacken Metal Battle Canada, a national competition in which up-and-coming metal bands across the country compete for the chance to represent Canada on the international stage at Germany’s massive Wacken Open Air Festival.

“They made it all the way to the finals in Toronto. If they would’ve won Toronto, they would’ve made it to Wacken,” added Thomas.

In addition to booking metal shows in venues across Winnipeg year-round under Ninjacat Productions, Thomas has been running Metalfest as a one-man show for the past 12 years.

“The first one was with me and another guy, and he stepped down after the first year,” said Thomas.

According to Thomas, the festival’s evolution was slow but steady, as Manitoba Metalfest moved from booking only local bands, to small Montreal-based acts, to the legendary international metal bands the festival can bring in today.

“That’s where we’re at now: we’re flying in bands for the show,” Thomas said excitedly.

Of course, Winnipeg’s own metal acts aren’t only a reliable part of the festival – they’re clearly fans at heart.

“First Metalfest I went to was in 2008. I think Into Eternity was playing one night, and Razor was the second night,” said Menza.

“It was cool, because that show got me into a ton of local bands that they had at the time when I was 19.”

It’s not just Metalfest that’s grown and evolved. Thomas says Winnipeg’s metal scene as a whole has grown exponentially since the festival’s debut.

“The scene was really struggling back then. There were like maybe six or seven metal bands in the scene, so it was the same bands at every show, the crowds were really small, so Metalfest was the only chance to really play for something big,” said Thomas.

“It’s been awesome. I feel in the last two years or so, it’s struggling a little right now – not like the 2000s – but I’d say around 2005-2012, it was pretty damn awesome. Really strong, local shows packed all the time. Bands like Dreadnaut, Tyrant’s Demise, Electro Quarterstaff, Seventh Sin, all those bands were packing bars.”

However, even if Thomas doesn’t think Winnipeg’s metal scene is at its best right now, he’s expecting things to pick up again soon – a testament to his faith in the longevity and diversity of metal.

“I think the scene’s in a bit of a transitional stage. The Zoo’s gone, it’s definitely changing now. There’s always new bands that come in and take over the scene again, so I think we’re waiting for the next big local metal band to come out.”

Thomas is unabashed in his love for hosting Metalfest and for heavy metal in general. However, he cited one horrifically memorable incident from a Metalfest past – something anyone with a tendency to take moshing too far should heed as a cautionary tale.

“We did have one guy at the festival with Brutal Truth and Malefaction back in 2010. Some guy was moshing so hard that he snapped his foot right, clean-break off. I’ve never seen anything like that in my life,” said Thomas.

“His foot snapped. Not just broke, it was hanging by the skin and I almost puked right at the bar. It was crazy.”

With regard to this year’s Metalfest, which takes place at the Park Theatre from April 15 to 16, Thomas pointed out a few acts he’s particularly excited to have along.

“[Local death metal veterans] Immortal Possession. It’s gonna be their first show with the original lineup since, I think they played in 2001 at the Zoo and then before that, they haven’t been around since 1994,” Thomas told the Manitoban.

“So it’s pretty big that we’ve got Immortal Possession reuniting to play the festival. They’re classic death metal from the early 90’s in Winnipeg […] it’s going to be amazing, I’m gonna be 14 all over again.”

Thomas went on to make mention of the first day’s headlining act Terrorizer as another band he can’t wait to see live.

“They’re the pioneers of grindcore, and they got Pete Sandoval of Morbid Angel – and he’s one of my favourite drummers of all time.”

Looking to the future, Thomas mentioned that in addition to approaching Morbid Angel themselves about playing next year’s Metalfest, he also wants to integrate some hardcore punk bands – citing Dayglo Abortions as an ideal example – into the festival’s all-metal lineup.

As for this year, Thomas is just hoping that everyone will enjoy the show.

“I just want it to be a great show where everyone has a good time. I don’t even care if we make money.”

All proceeds from the Manitoba Metalfest benefit go directly to support the festival. Tickets are $10 in advance and are available for online purchase via www.ticketfly.com

The Staves: Blood I Bled

Ralph returns to the ’Peg as headliner