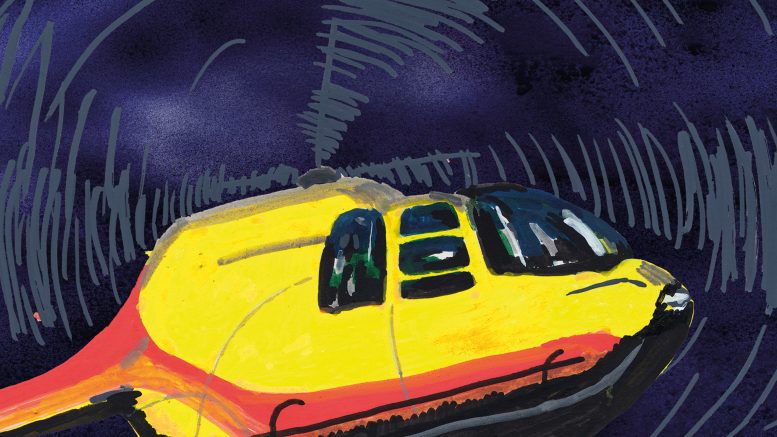 Toronto indie-rock group Kiwi Jr. is back once again with another batch of sticky, smartly constructed songs.

The band popped on the scene with 2019’s Football Money, drawing the attention of rock critics everywhere with its extremely rock-critic-friendly sound that combined the loose literary witticisms of Pavement, the exuberant jangle of C86 and the scrappy melodicism of ’80s Kiwi bands like The Clean and The Bats.

But on Chopper, Kiwi Jr. breaks free from its jangle-pop chains and swings for the fences.

Teaming up with Dan Boeckner of Wolf Parade and Arcade Fire fame on production, the band takes clear inspiration from the anthemic sounds of ’00s indie and power-pop — think The Pains of Being Pure at Heart, of Montreal or The New Pornographers.

This is not to say the band has become any less sharp and elliptical. Gaudet is still constantly dropping one-liners too dense with in-references to fully grasp, but too clever to not love. Like “flirting with the human scorpion jacket from Drive / he’s a haircut aiming a jar of gin” on “The Extra Sees the Film,” or “trapped in a downtown area storage facility overnight / Christ on the cross sees the sunrise for a second time” from “Downtown Area Blues.”

The difference on Chopper is that these too-cool nuggets of loose poetry are couched in massive hooks, delivered with a refreshingly sincere, vital energy and occasionally only part of a more traditionally structured lyric.

Take for example the Strokes-aping “Night Vision,” a driving, nocturnal beauty that follows an almost relatable narrative of relationship anxieties and slacker striving, or the swooning meditation on nostalgia via pop culture reference “The Sound of Music.”

Chopper is real indie-rock bliss, scratching every itch you want scratched in a record like this.

It’s anthemic but never overwrought, smirking and superior without being pretentious and obviously derivative but exciting and fresh.

Turner’s troupe to bring positivity to the ‘Peg