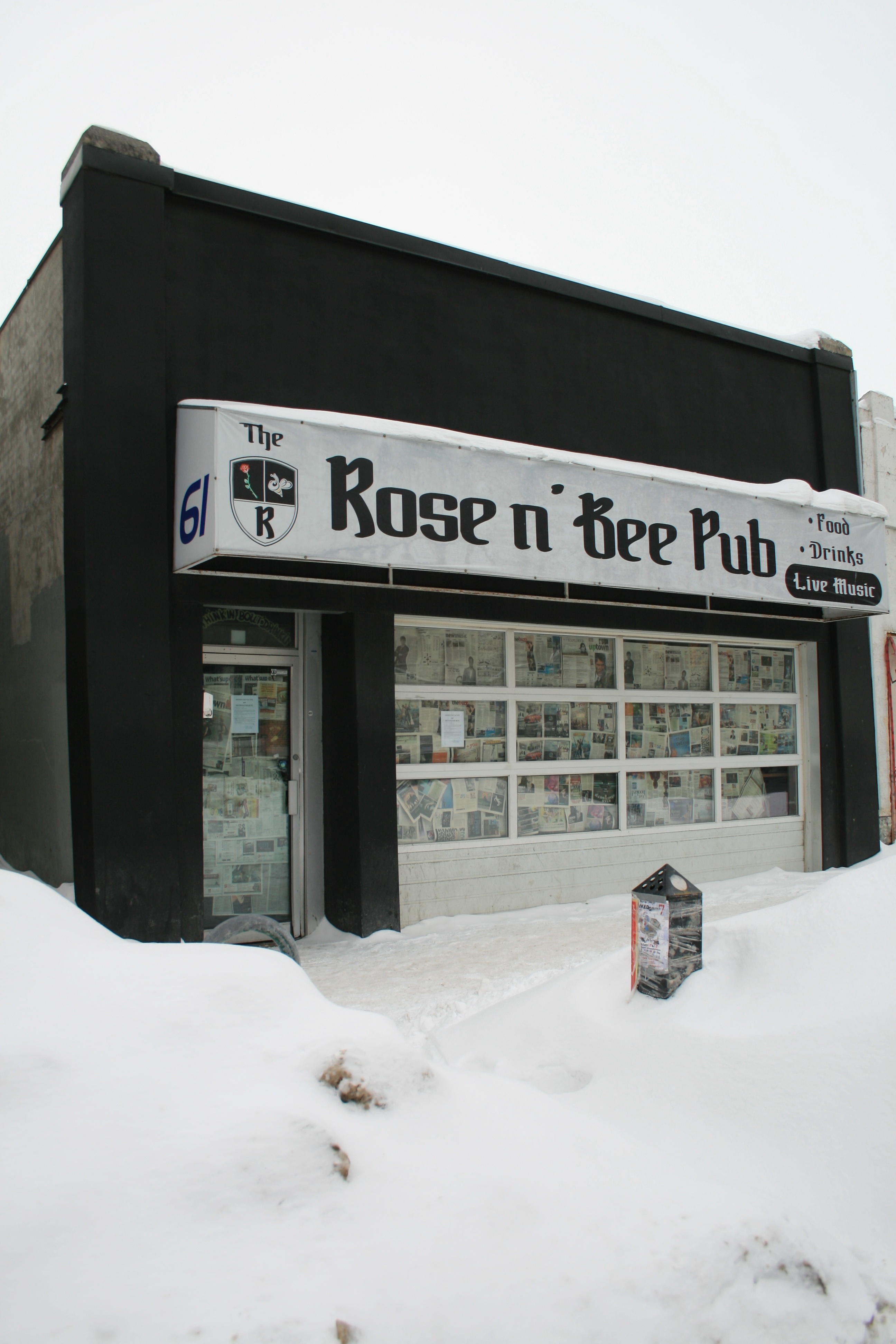 The rousing notes of Andrew Neville and the Poor Choices, Cheering for the Bad Guy, the drifting voices of countless karaoke superstars, and the laughter generated by comedians hang in the air like a smokers’ haze at 61 Sherbrook.

The garage door that opened for many summers onto Sherbrook Street will next be lifted under a new name. The sign over the entrance has variously read Eddy’s Garage Bistro Bar, Hooligans Neighbourhood Pub, the Standard Tavern, and most recently, the Rose n’ Bee.

Matt Rosenby, who ran the Rose n’ Bee along with his brother Mike, had great things to say about many people connected to the location. He highlights positive relationships with surrounding business owners like the West Broadway Biz, and the people at Times Change(d) High and Lonesome Club.

His enthusiasm for the performers is heartfelt. “I really want to thank Andrew Neville and the Poor Choices who played every Wednesday, Mike Green, who hosted comedy every Thursday, Mischa Decter and Micah Erenberg who did [the booking of acts for and promoted] the Sundays. We had such great shows,” says Rosenby.

“I’ll really miss being able to count on the spot for a great Wednesday night of getting wild with Andrew Neville and the Poor Choices, that’s for sure,” says Birnie.

Hisco celebrates the long tradition of that group. “It was, and through every incarnation remained to be, the go-to joint on Wednesdays for Neville,” she says.

“I knew just about everybody that was in there by name. Those people became friends,” says Rosenby, who gives special thanks to Jones for being an integral part of the place.

Bruce Berven, of Mariachi Ghost—whose former bands the Xanad00ds and the Shouting Ground played the venue—expresses warm sentiments about the management. “When Matt and his brother took it over, from my perspective it was on its way up.”

“A live music venue is needed in the area, but who has the money to do major renos in that space?” asks Berven.

The kitchen splits the venue into two parts, separating the dining area from the bar, and no one ever uses the dining space, he explains.

“As most people know, the most defining characteristic of the bar over its four incarnations was the truly insane and idiotic placement of the kitchen,” Jones concurs. “Otherwise [ . . . ] it was born as a divey little bar, and it generally stayed that way, and that’s sort of why so many people loved it, I think.”

Rosenby reflects that he and his brother were aware of those concerns, and sees the issues as more structural. He explains there was debate over responsibility for renovations, and how the lease agreement and rental dues reflected this matter. Building owner Eric Eyford had not been reached for comment at press time.

Birnie reminisces, “When Stompin’ Tom died last year, I just put on my boots and headed down there knowing we could hear plenty of Stompin’ Tom tunes before the night was done.” Who will play the wake for the Rose n’ Bee?

“If I would have known this would have come to end, we would have thrown a huge blowout, a big celebration,” says Rosenby.

Jones concludes, “If there was a cool, new, well-planned and laid out venue with a 100+ capacity in that area it would do really well. But that particular spot might just have a curse on it at this point.”