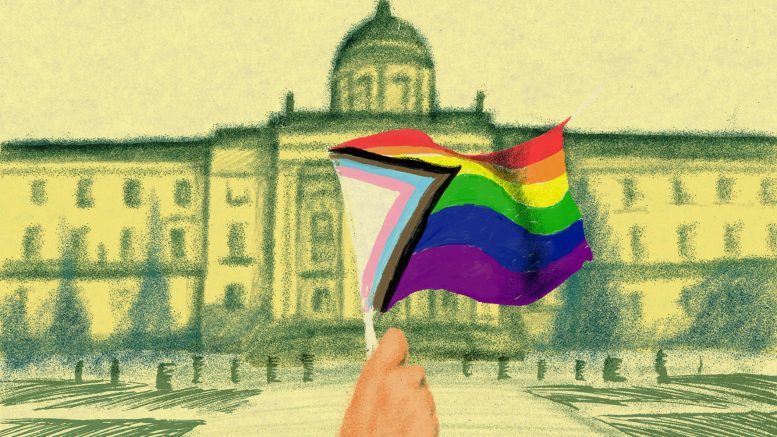 “Life gets easier once you are out.”

That is what is often heard from close family and friends once one decides to come out and start being unapologetically themselves. Though there is no accurate way to predict the societal consequences of taking such a step on one’s journey, who would blame a straight, cisgender person for having such a naive perception of the lives of queer people?

After all, thousands affirm their allyship every year during pride events, the top three federal political parties have each endorsed legislation to protect 2SLGBTQ+ rights at some point and there have been sitting members of the legislative assembly (MLAs) of Manitoba who have identified as part of the community. Though I am not one to downplay the evident progress that has been made in recent years, I am unsure we are at a point in time where society has moved past its prejudice.

Since I was little, I knew I wanted to be involved in politics. I have always tried to advocate in the best interest of my demographic because as a racially diverse immigrant, I have experienced the legal, mental and physical struggle of being a newcomer first-hand.

Though it is undeniable that small changes have been made, the only way to achieve meaningful systemic reform is by someday acquiring a position of power, which is a goal I have had since I arrived in this country. But in the back of my head, a recurring fear always surfaces when thinking about my future in the political field: rejection.

Right now, there are only two openly queer ministers in Prime Minister Justin Trudeau’s cabinet, both of whom occupy minor roles. Out of the 338 seats in the House of Commons, only eight are occupied by members of the 2SLGBTQ+ community despite Canada being home to one million people who identify as such.

In a late night conversation with my best friend, I brought forward the possibility of continuing the whole pretending-to-be-straight scheme, and even at some point arranging a fake relationship in order to save my political aspirations.

As deplorable as lies are, I find it more deplorable that society is not ready for someone like me to hold a high-ranking leadership position for the mere fact that my sexual orientation does not fit the set standards.

Though the conversation went back and forth I came to my senses and realized three things.

Firstly, society loves pushing the idea of allyship, but not enough to allow for members of the 2SLGBTQ+ com- munity to hold positions of power. When they do, they are forced to endure the nonsense that lies within the tokenism argument.

We have more than once encountered someone who takes overwhelming pride in their queer friendships, or seen countless individuals marching in solidarity during pride parades, and of course, we have all seen politicians leading pride marches. After all, an ally is a better advocate for the cause than community members themselves, right?

We have long deprived queer trail- blazers of an adequate platform, and have only granted them the minimum input needed to please the masses. The problem is that political entities should not seek to please allies, but should instead address the needs of the community they are aiming to help. The best way to do so is through people with first-hand experience, something allies simply do not have.

Seeing people like Uzoma Asagwara break the glass ceiling as the first black, non-binary person elected to office in Manitoba is a vivid example that tokenism is merely a societal construct based on a falsely assumed lack of capability within the queer community. Since being elected and becoming the Manitoba NDP critic for health, seniors and active living, Asagwara has steadily gained a name of their own not only within their party but also across Manitoba, ultimately becoming Pride Winnipeg’s
grand marshal.

The second realization I had is that playing pretend is exhausting. The amount of uncomfortable situations I have endured for the sake of fulfilling societal norms are countless at this point. For so long, I have neglected my feelings and no career is worth that.

Lastly, I came to realize that if I was going to make a bid for public office someday, I would rather win or lose being unapologetically myself. Having the person I truly love by my side regardless of their gender, and hoping constituents elect or not elect me based on my policies rather than my sexual preference. However, that is something only time will tell.

In the meantime, I hope more people break the glass ceiling. I hope there is more visibility in our public servants, and I hope we move past prejudice.

As uncomfortable as the conversation may get, living inside a closet is far worse.