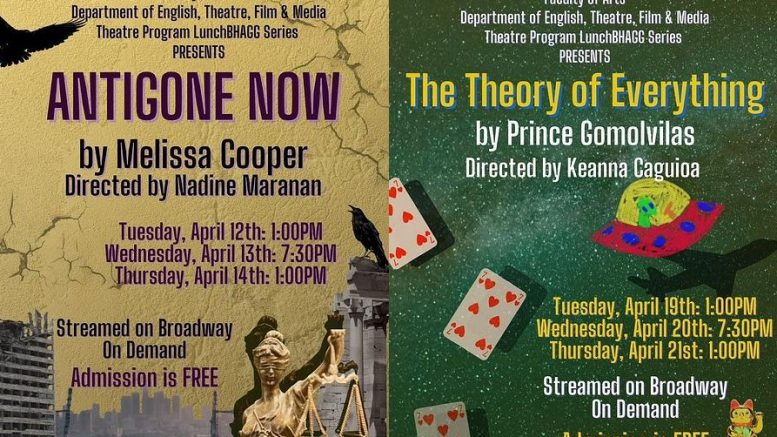 This month, you can catch two new online productions from the University of Manitoba’s theatre program. The first show is Antigone Now by Melissa Cooper and the second is The Theory of Everything by Prince Gomolvilas.

The plays are being presented as part of the theatre program’s Lunch B.H.A.G.G. series: “short, one-act shows” that are directed by students and meant to be held during lunch hours, hence the play on the word “lunch bag.”

Antigone Now is directed by Nadine Maranan, a fourth-year science student pursuing an honours degree in psychology with a minor in theatre, and The Theory of Everything is directed by Keanna Caguioa, who is in their fifth year of an advanced degree, with a double major in English and theatre.

Set in the aftermath of a war, the play explores themes such as justice, democracy and gender roles as Antigone challenges the systems around her.

“It was quite a process choosing this show in particular,” Maranan said.

“I came into directing a Lunch B.H.A.G.G. knowing I wanted to direct, but not necessarily knowing what show I wanted to direct. Based on plays that I liked, Katrina Dunn, my advisor, put together a bunch of plays for me to read and possibly choose from. And among them was Antigone Now.”

Maranan said that part of the story’s charm is that it is universal and transcendental. “The story of the play transcends time. This show reaches audiences from time period after time period because it has everything, it shows what it means to be human,” she said.

“The play shows us the beauty of the human experience, such [as] being able to love and hope and feel and see the world ever-changing around us. But the play also exposes the ugliness and horrors of what people are capable of doing, such as war and corruption of power.”

Maranan also has a personal connection to the original play, having studied it before in high school.

“Antigone’s story has always had a special place in [my] heart and it’s super cool that I get to explore it in this capacity,” she said.

The second Lunch B.H.A.G.G. production, The Theory of Everything, explores race, faith and identity politics through a comedic lens.

Caguioa’s directorial choice of the play was rooted in a desire for representation.

“I knew going into this project that I wanted to do a play by an Asian-Canadian playwright,” Caguioa said.

“Being Filipino-Canadian myself, it was something that was extremely important for me to do. […] It was a long process, but by some miracle I found The Theory of Everything, which has an Asian-American playwright […] and an all-Asian […] cast. It was also the perfect mix of funny and serious.”

Caguioa believes the play will resonate with audience members in its universality.

“I think everyone has gone through a period in their lives, however long or short, where they start to wonder about their place in the world and where they really belong,” they said.

“It can be hard sometimes to reconcile two parts of your identity that can be so different but still, somehow, are both you. While the characters are southeast and east Asian, a lot of their arcs are really resonant regardless of race: looking for love, looking for identity, looking for happiness. Each person on Earth is their own individual universe, and this play really explores that notion of feeling alienated from the greater universe and feeling lost in your own.”

Although Maranan and Caguioa have both directed in the past, these Lunch B.H.A.G.G. productions mark their first full-length directorial debuts with in-person performances.

Auditions for their upcoming Lunch B.H.A.G.G. productions were conducted virtually, as were a portion of the rehearsals.

Regarding the auditions, Maranan said her “directing experience has all been virtual, so I didn’t really have much to gauge from. Film actors send in self tapes all the time and that works, so why not? […] [I knew] the disconnect between myself and the actors […] would dissipate once we got to be with each other physically.”

Maranan’s instinct was correct, and both directors spoke highly of the capabilities of their cast to adapt to this online-to-in-person experience with flying colours and of their acting abilities as well.

Other challenges that Caguioa and Maranan have faced throughout this experience are learning how to direct people wearing masks, figuring out the administrative side of directing and balancing schoolwork and directing duties.

“It’s all a learning process, and it wouldn’t be very fun if it were too easy,” said Maranan.

“It really helps having such a great support system through it all and to have Keanna go through this entire experience with me.”

Despite the challenges they faced, both Caguioa and Maranan enjoyed the process of directing.

“Being a director is like the perfect mix of [stage management and creative agency]. I love being able to work with the cast and their instincts to let the script come to life.”

“It feels amazing to physically be in the rehearsal space with my actors and feed off of each other’s energy and just play,” Maranan said.

“I am so […] excited to share this show with everyone! I am so grateful for this opportunity.”

Jiving and swinging into the roaring ’20s with UMSwing