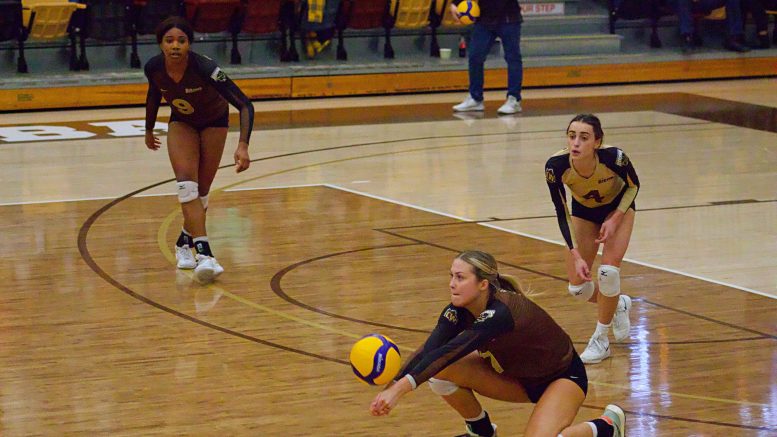 The girls travelled to Saskatoon, Sask. but were not able to come away with a win after the journey.

During the regular season, the team finished with six wins and 10 losses. The additional three losses in the playoffs make for an overall disappointing season for the team.

With that being said, the squad did not go down without a fight. After losing the first game in four sets and the second in three, the team rallied together and took the last game to five sets, capping off an exciting season with an exciting — if disappointing — finish for Ella Gray and the rest of the herd.

“Losing in the playoffs is never fun, especially when it is three [games] straight right away,” Gray said.

“We played well, but ultimately did not have what it took to win. I am very proud [of] everyone’s effort and how these girls played this week.”

Although her team had a poor weekend, Gray personally put on a strong performance, finishing the three games with 24 kills and three assists. Still, despite Gray’s strong play during the games as well as throughout the season, it was not enough for the team to continue on in the playoffs.

“Overall, I think we had a successful season,” Gray said.

“Obviously we did not get to where we want to be, but we got better every day. Every single day was a new day and we always improved our craft.”

“This team was a ton of fun to play on this year,” Gray said.

“I made so many new friendships and the bond was amazing. We had some on-court success, but off the court was something that was even better.”

The majority of players on the Bisons women’s volleyball team are in their first or second year of eligibility. With such a young squad, the herd has many seasons ahead of it and many opportunities to learn and grow as a team. With so many players returning next fall, Gray says the future for the Bisons is promising.

“We have some young players that are planning on coming back, which is great for our squad,” Gray said.

“I am very excited for next year and expect big things out of each and every returning player.”

Along with Gray, second-year player Light Uchechukwu also performed well and fought for her club all season.

Uchechukwu finished the year with 213 kills and eight assists. Signs point toward her being a bright spot in the future of the Bisons volleyball program.

Idle No More symposium held at the U of M

Manitoba sweeps Brandon off the court