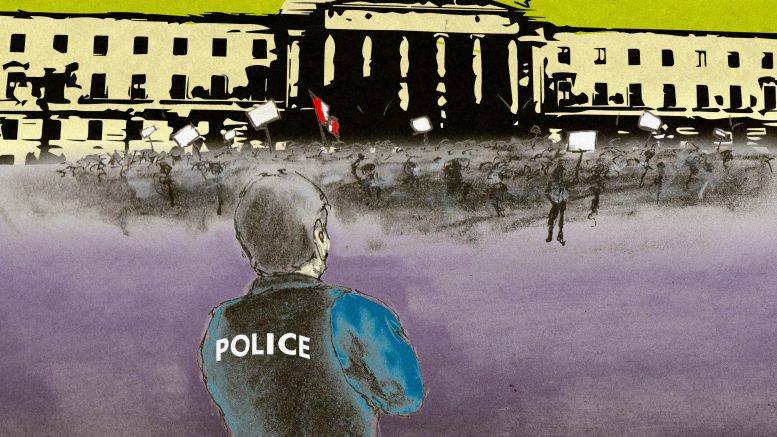 After the federal government legislated the use of the Emergencies Act — legislation that allows the government to have significant temporary powers to freeze the bank accounts and credit cards of protesters or arrest them — on Feb. 14, the protests were on track to end. Despite Conservative pushback on Parliament Hill, “freedom” protests in Ottawa were rapidly cleared and the use of such temporary powers came to an end on Feb. 23. But Winnipeg protesters were one of the exceptions. After receiving a lenient police deadline to end their occupation across the street of the Manitoba Legislative Building, protesters moved to a nearby location in Memorial Park. This lack of dedicated action from the police department suggests the “freedom convoy” extends beyond unvaccinated individuals and appeals to public servants like Winnipeg’s police force.

The Emergencies Act, created in 1988 to replace the War Measures Act, grants the federal government “special temporary measures to ensure safety and security during national emergencies and to amend other Acts in consequence thereof.” The federal Conservative leadership and its provincial counterparts found the measure to be unnecessary. Prime Minister Justin Trudeau — who used the Emergencies Act for the first time in Canadian history — pleaded his case by condemning the illegal occupations occurring nationwide while also emphasizing the fact these are only temporary tools to restore peace and order. Though the act was efficient in handling the occupations in cities like Ottawa, Toronto, Montreal and Halifax, Winnipeg was seemingly left out.

Despite the fact that federal authorities ended the state of emergency, certain provincial governments failed to recognize the seriousness of the situation in the first place. Such was the case for Manitoba Premier Heather Stefanson. Stefanson initially wrote a letter to Trudeau, requesting “immediate and effective federal action regarding the blockade activity now unfolding at the Canada-U.S. border crossing station at Emerson.” Yet Stefanson felt dissatisfied by the use of the Emergencies Act solely because Winnipeg’s situation was supposedly “dramatically different” than Ottawa’s state of affairs. But if the situation was so dissimilar, why were “freedom” protesters right across from the Manitoba legislature peacefully told by police officials they had an ultimatum to clear the area?

After the Winnipeg Police Service (WPS) sent protesters a letter requesting the removal of all trucks, tractors and equipment from the street, protesters diligently complied with the police request only to move to a nearby location in Memorial Park. Co-organizers of the protest have said their presence is important to start a national dialogue on vaccine mandates and the use of the Emergencies Act. But the dialogue they are aiming to start has, as of now, only brought disruption to Winnipeggers. Furthermore, though WPS measures have, to an extent, taken action against convoy protesters, they haven’t been as brutal as the actions taken on Feb. 14 when two Indigenous counter-protesters were detained by the police.

The difference of treatment between these protesters — one group fighting for their choice to abstain from getting vaccinated while the other two individuals were singled out despite not demonstrating antagonistic behaviour when trying to stand for their contrary beliefs — demonstrates the prevalent systemic racism that exists within the Canadian policing system. Though the WPS has taken certain steps to battle systemic racism — such as further strengthening its relations with marginalized communities, diversity within the policing staff, continued training to enforce unbiased action and maintaining accountability standards — there is more to be done. Dismantling systemic racism is not only about liberating marginalized groups, but also about removing the high standards by which the oppressor is regarded. It is inconceivable that protesters who, despite only moving themselves somewhere else, have not faced consequences.

Regardless of what Stefanson states, cities like Winnipeg faced a state of emergency with protesters who were willing to endanger the peace of mind of residents for the sake of a senseless cause.

U of M studies COVID-19’s impact on kids’ conditions