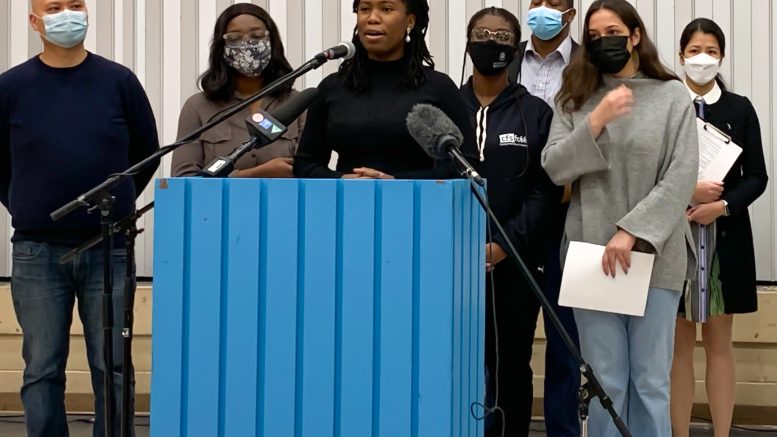 The coalition has collected some 300 signatures for a petition that is to be read to the legislative assembly by NDP members including Uzoma Asagwara and Jamie Moses.

Canadian Federation of Students Manitoba campaign coordinator Judith Oviosun argued it is unacceptable that people such as international students, migrant workers and others of precarious status currently do not have equal access to publicly funded health care in the province.

“We also do not believe that a tiered system or private health insurance is a substitute for health care in Manitoba,” she said.

The group also wants any legislation expanding health care to be protected from repeal by future governments, as well as the development of policies and training to ensure that those with precarious immigration status are protected during interactions with the health-care system.

The move was expected to save the government $3.1 million.

“If you asked me, I would say this is just plain discrimination and we should just see this policy for what it is, as being racist,” Oviosun said.

“The government is single-handedly picking and choosing which Manitobans should have access to health care and who shouldn’t.”

UMSU international community representative Tolani Olanrewaju discussed how health care is not an issue that has two sides: it is an issue where people deserve access.

She discussed her experience over the summer of experiencing delays in receiving results from a CT scan, possibly due to having private insurance rather than public.

Olanrewaju was initially told she would receive her results within two to three days, but after months came and went, she finally asked about the cause for the delay — and was informed it could have something to do with having private insurance.

During the summer of 2021, Lugalambi, a University of Manitoba student, found himself saddled with $123,000 of medical debt following a lengthy hospital stay during which he contracted COVID-19.

Lugalambi was between insurance coverage periods — finishing up at the International College of Manitoba and set to begin studies at the U of M — when he entered the hospital.

He appealed to his insurance provider, but they ultimately ruled that his condition was pre-existing and his medical costs were ineligible for coverage.

“Though he could not be here in person today, Calvin is hoping that his message reaches all of us and instills hope,” said Koslock.

“Despite what happened to Calvin though, he recognizes all of the medical staff at both hospitals […] Calvin wants his story to be a beacon of hope, to revive the conversation of health care for all here in Manitoba. His situation could have been avoided or different if health care for international students and all peoples on these territories were accessible.”

Running with the herd