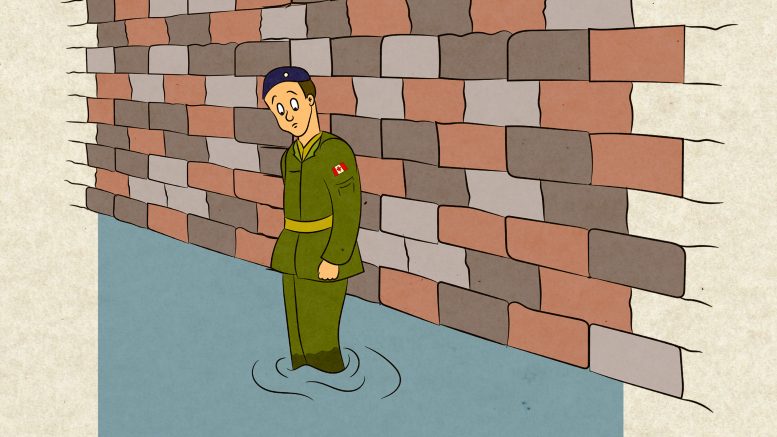 In less than a year, British Columbia has suffered some of the worst shifts in weather from drought and fire to flooding and mudslides. The 2021 wildfire season in B.C. is considered the third worst on record, with 1,610 fires burning 8,682 square kilometres of land. The only wildfire seasons worse came just years earlier in 2017 and 2018. B.C. residents could turn the corner of a valley on any given day to see the side of a mountain cascading with fire. Many highways were closed to non-essential travel due to proximity danger.

Now, many of those same highways are gone due to the latest shift in extremes. On Nov. 14 and 15, B.C. was hit with a massive deluge, drowning large portions of southern regions in the province. Communities were submerged by a dangerous mix of water and soil overnight. Lands were reclaimed by natural surroundings. Towns quickly started breaking rainfall records. Hope, B.C. reportedly quintupled its last record.

This rapid flux between drought and hellish fire to rapid flooding is what 1.1 degrees of global warming looks like. Imagine what global thresholds will look like — if they are reached, that is.

The floods in B.C. are positioned to be the most expensive climate disaster in Canadian history. The cost of rebuilding highways, railways, towns and supply chains is estimated to reach several billions. B.C. Premier John Horgan declared a state of emergency and military assistance has been sent to help residents and start the clean-up process.

In a similar fashion to the wildfires this summer, the military will be tasked with cleaning up the worst effects of the climate disaster. But this spectacle doesn’t sit right. Time and time again Canadians are made to rely on the military like it is Mr. Clean. But the fact is, when Prime Minister Justin Trudeau sends in the military to assist in climate crises, he is also hypocritically employing the largest emitter of greenhouse gases in Canada. It looks like Mr. Clean has mud on his boots.

By using the military for Canada’s climate crises, Trudeau is implying Canadians are on their own until after the damage is done. The prime minister clearly prefers to adapt to global warming rather than mitigate it. The military is part of the problem, not the solution.

According to a 2016 report completed by the Canadian government, the Department of National Defence (DND) contributes to over half of the government’s total emissions. It’s not only the gas-guzzling war machines that emit toxins into our air, either — the cyclical production of new military gear also consumes massive amounts of energy. The production cycle in the military is in constant flux with new models of weapons being bought and manufactured on a regular basis. The DND has an annual budget of $23.3 billion and they make sure to spend it.

Beyond just emitting greenhouse gases, the Canadian military has been linked to leaking toxins and leaving bullet pollution from shooting ranges, letting dangerous levels of lead leach into the surrounding environment and water systems. The government has also historically disposed of dangerous biohazardous material in environmental sites.

In a signatory letter addressed to Trudeau earlier this year, the Canadian Foreign Policy Institute requested Canada stop purchasing expensive, useless and environmentally damaging fighter jets. In the letter, the Institute noted the cost of buying a new F-35 stealth fighter jet — produced by the notorious weapons manufacturer Lockheed Martin — would set taxpayers back $19 billion. However, the life cycle of a jet could cost closer to $77 billion — money that should be used to reduce emissions and transition to a clean economy.

Despite the Canadian military’s horrific record during the largest climate crisis in human history, Canadians have been wholly uncritical of its influence. Discourse regularly surrounds multinational corporations, and rightfully so. However, the military machine that consistently pumps damaging chemicals and fumes into our air and water — while simultaneously eating into the tax revenue the government could use to mitigate climate change — cannot be overlooked.

Perhaps it is because the military has consistently played the supposed heroic role in climate crises that it is uncritically left out of the general discussion about who is responsible for the destruction of the planet. News coverage on natural disasters consistently exploits images of military personnel holding victims in blankets or scaling a helicopter to reach people stranded on their rooftops. The truth is that these people are being saved by the very institution creating the conditions for their rescue. If the Canadian government stopped buying new military toys and focused on decarbonization, B.C. likely wouldn’t be in this environmentally volatile situation. Canada needs to do more than adapt to undesirable circumstances. To decarbonize, Canada must first demilitarize.

COVID-19 is exposing fundamental flaws in the Canadian housing market