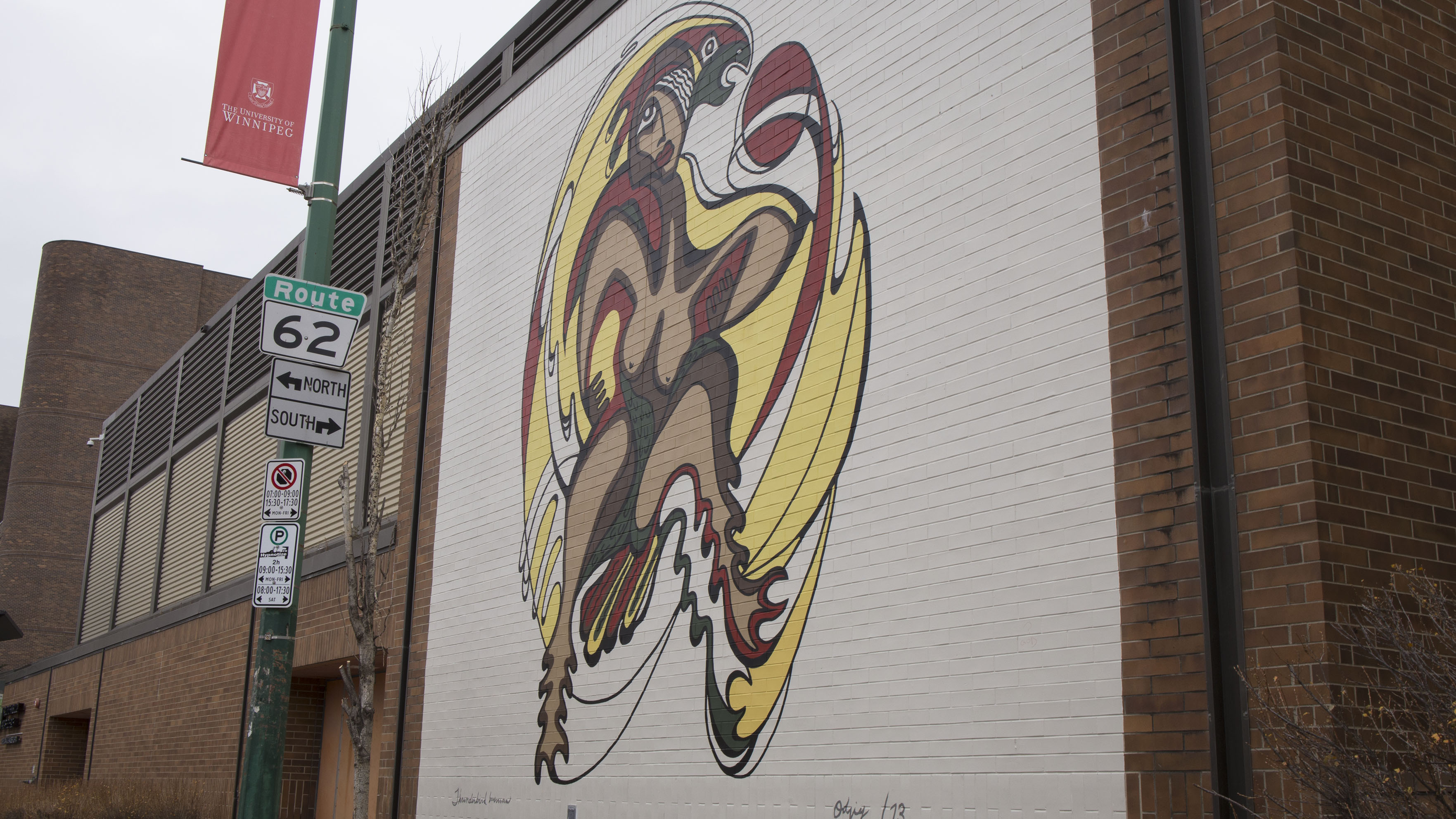 The mural recreates Odjig’s “Thunderbird Woman,” a print from 1973, and was guest curated by Jaimie Isaac, curator of Indigenous and contemporary art at the Winnipeg Art Gallery.

The 32-by-25 foot mural, which took more than 50 hours to complete, was painted by Winnipeg-based artists Mike Valcourt and Peatr Thomas.

The festival takes place annually from Sept. 1 to 30.

This year was the festival’s longest run with a total of 56 days and saw the creation of 19 murals across the city.

“Certain neighbourhoods are completely lit up with these beautiful pieces of work and collaborations,” Isaac said.

The “Thunderbird Woman,” which is part of the WAG’s collection, was chosen by Isaac to showcase one of the WAG’s works that is shown infrequently.

“I am really interested and passionate about thinking about the Winnipeg Art Gallery’s collection and new ways of engaging and interpreting the collection,” Isaac said.

“Most galleries and museums, only one to three per cent of the vault or collection is actually shown during exhibitions.”

The “Thunderbird Woman” combines the thunderbird, a symbol of guardianship and protection, with a “fierce feminism,” Isaac said.

“It’s got, as I said, a feminist fierceness so that it’s really appreciated now even with all genders in terms of respect for women and folks from the non-binary community and the missing and murdered Indigenous women movement and advocacy for women’s lives,” Isaac said.

Odjig opened the New Warehouse Gallery in Winnipeg in 1974, the first Indigenous-run gallery in Canada.

“She opened it up because she was excluded from the sort of mainstream idea of what contemporary art was,” Isaac said, “and so she saw that challenge and barrier as an opportunity to really open up and hold space for contemporary and Indigenous artists at the time.”

The “Thunderbird Woman” is located across the street from Kenneth Lavallee’s “Star Blanket Project,” another Wall-to-Wall mural.

Lavallee’s Star Blanket Project aims to paint traditional star blanket quilts over the façades of Winnipeg buildings to serve as a reminder and to honour missing and murdered Indigenous women in Canada.

Isaac was excited about the close proximity between the two murals and their relationship.

“There’s this acknowledgment of colonial violence against women and then there’s also this symbol of protection, and guidance and resilience from a kind of woman embodiment of another world being,” Isaac said.

Isaac said she sees the Thunderbird Woman as a tool of decolonization.

“I think a crucial part of decolonizing is recognizing ways in which we were colonized,” Isaac said. “And so I think it both does that, but it also, more importantly, asserts presence both historically and in contemporary narratives and aesthetics.”

“I think it’s a decolonizing gesture,” she said, “but it’s also a gesture of self-determining and asserting presence in a really positive way.”

Take Back Manitoba From Factory Farming