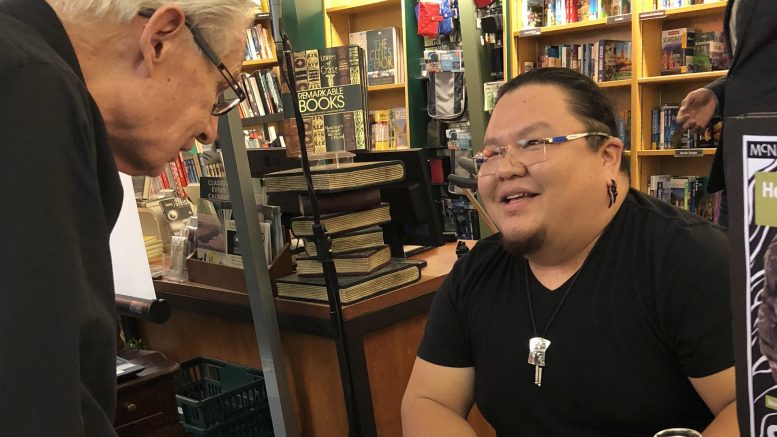 Artist Brett D. Huson (Hetxw’ms Gyetxw) – who has worked in the film and television industry for the past decade – launched his book The Sockeye Mother Jan. 4 at McNally Robinson Booksellers.

Huson is a member of the Gitxsan Nation, whose unceded territory is in the north western interior of British Columbia. He has actively volunteered for organizations such as Ka Ni Kanichihk and Indigenous Music Manitoba.

The book specifically targets a young audience between the ages of eight and 11 with illustrations by Natasha Donovan tracing the journey of the sockeye salmon throughout its life cycle. Donavan is a freelance artist whose work has been published in the The Other Side: Anthology of Queer Paranormal Romance.

Huson said that his life experiences, the political economy of the region, and his culture motivated him to write and share stories specifically related to Indigenous peoples. These stories, he said, highlight the significance of cultural knowledge rooted in finding a balance between humans and the environment.

“Our life cycle evolved around the salmon’s life cycle because they were our main diet, our main source of food,” Huson said.

Noting that the sockeye are a keystone species, one of the linchpins of their ecosystem, Huson said the sockeye have played a crucial role in developing the land and replenishing the environment around it with  “nutrients that the earth needs.”

Huson further added that the population of the sockeye is so severely depleted that it is hard for his people to fish, despite this being their primary food source and livelihood.

“I wanted to portray to all ages through this book the importance of this species because it is depleting, and the evidence of the impacts of that is really coming through now,” Huson said.

Hosted by Governor General’s Literary Award winner David Alexander Robertson, this launch was the first of the year hosted by the celebrated local bookseller.

Robertson commended Huson’s efforts and described the work as a “beautiful informative book” in his introductory remarks.

Huson said learning during the formative years shape how youngsters make sense of the world around them, and that he wanted to present an alternate perspective to young people “to show them the things that they’re missing because predominantly populations are in urban centres and in larger parts of Canada.”

“People are very disconnected from the land, they don’t understand that everything is tied to things like the salmon and there are so many different keystone species that exist in this country but this is being severely impacted now,” he added.

The education system, he said, is teaching the young generation “consumer-based education.”

Speaking of the commercial fishing industry on the West Coast as a “multi-million dollar industry,” Huson said that the various levels of governments have “removed a lot of the protection on the waterways and the watersheds in Canada and that severely impacts the protection of any species” to undertake various energy projects.

In March 2017, two Gitxsan Nation chiefs filed a judicial review against the federal government for approving a $36 billion liquified natural gas (LNG) terminal on Lelu Island at the mouth of the Skeena river, contending that the company Pacific NorthWest LNG infringed on their right to be able to fish salmon on the Skeena river.

The Gitxsan have fished on the Skeena river for generations. The Canadian Environmental Assessment Agency in its evaluation of the LNG project concluded that the Gitxsan would not be impacted by the LNG terminal, as it is located on Lelu Island.

A particular concern among Indigenous peoples in the area was the damage that would have been caused to the beds of eelgrass which the salmon population depends on.

A study led by Jonathan Moore, a professor at Simon Fraser University, revealed that salmon in the Skeena originate from 40 different populations that pass through the territories of many First Nations communities, all of which were not consulted by the government.

Huson said that there needs to be a balance between the economy and the environment, and suggested that governments must put stricter regulations on oil and gas companies in order to protect and preserve the environment.

The Pacific NorthWest LNG terminal project has been cancelled. However, major energy projects such as the Site-C Dam and the Trans Mountain pipeline project are still going forward in British Columbia, despite concerns raised by Indigenous peoples. These concerns echo the book’s theme highlighting the interconnection of various species and their role in creating a balance within the environment.