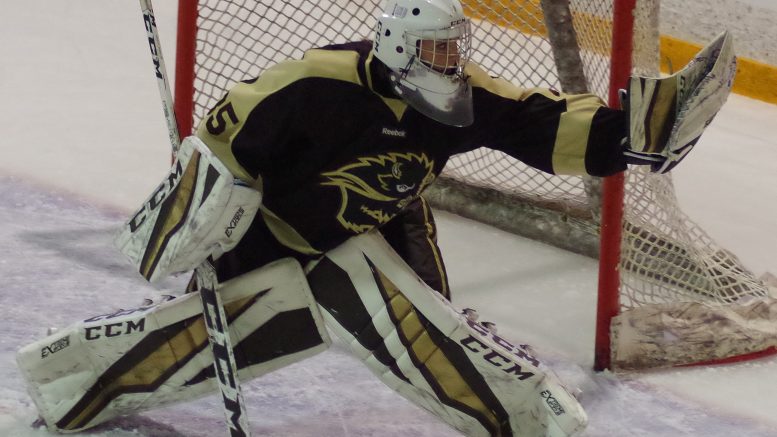 Bison rookie goalie Lauren Taraschuk makes a stop during a weekend series against the Saskatchewan Huskies on Oct. 20. Manitoba lost 1-0.

Two months into Lauren Taraschuk’s U SPORTS career, and she’s already one of the top goalies in the country.

Taraschuk sports a glistening 1.15 Goals Against Average, which is fifth in U SPORTS. She also has a .944 save percentage in five starts this season. Taraschuk is most recently coming off 147:08 minute shutout streak that ended on Nov. 11 in a 2-1 win over the Regina Cougars.

Having not allowed in a goal for almost four games, it didn’t get into Taraschuk’s head.

“I never actually think about shutouts because then that’s when it doesn’t happen for me is when I think about it before the game,” she said.

“I think playing the second game I had an idea of what Regina was like, so it wasn’t as nerve wracking as the first game was. I think seeing myself pull a shutout in the first game it was like, ‘OK, I can actually do this.’”

Taraschuk started playing the game of hockey at four years old, starting out on defence. She made the switch to goalie after watching her brother play.

“I watched my brother play hockey and I watched the goalies and I absolutely loved it,” she said.

Taraschuk, a graduate of J.H. Bruns Collegiate in Winnipeg, played for the Winnipeg Avros last season, sporting an impressive 0.92 GAA and .962 save percentage.  As a rookie, Taraschuk didn’t expect to play a lot this season and has been focused on making the most of her opportunities – which she has done thus far.

“Finding where I fit in and realizing I am behind a fifth-year goalie and just not getting in my head about not playing every single game because I did play a lot last season,” she said. “Really being patient and taking the ice time that I get and really making it worth it.”

Playing behind Rachel Dyck , Taraschuk has been able to earn a few starts in place of the Canada West all star. The pair have become close, according to Taraschuk, although it was a bit uncomfortable to start.

“At the beginning it was awkward, it wasn’t the best but I think we’ve really come to realize that we can do a lot for our team and just staying in it together,” Taraschuk said.

“Not really competing against each other but doing it for our whole team and just being good friends on and off the ice, we’re pretty close.”

Taraschuk attributes her success so far this season to sticking to what got her to this level.

“I think just really sticking to my game and doing what I do best,” she said. “And just staying calm in the net and taking it every shift, every period and just not overthinking it and not doing too much.”

Coming to play for the Bisons was a fairly easy decision for Taraschuk, even though she did have some other schools look at her.

“I knew pretty much over half the team coming in just playing with and playing against girls but I think the attraction was the program and how well developed and organized it is,” she said.

“Everyday I love coming to the rink. It’s so much fun doing what I love, it’s like at home, it couldn’t get much better.”

This Bison team has rattled off seven wins in a row to put them in first place in the Canada West, and Manitoba should be looked at as a threat to usurp the University of Alberta to win a national title.

“I think really just believing that we do have a chance and we have the skill to be able to win it,” Taraschuk said. “I think we really do if we truly believe and put in the work that we have to in order to win that championship.”

From there and back again