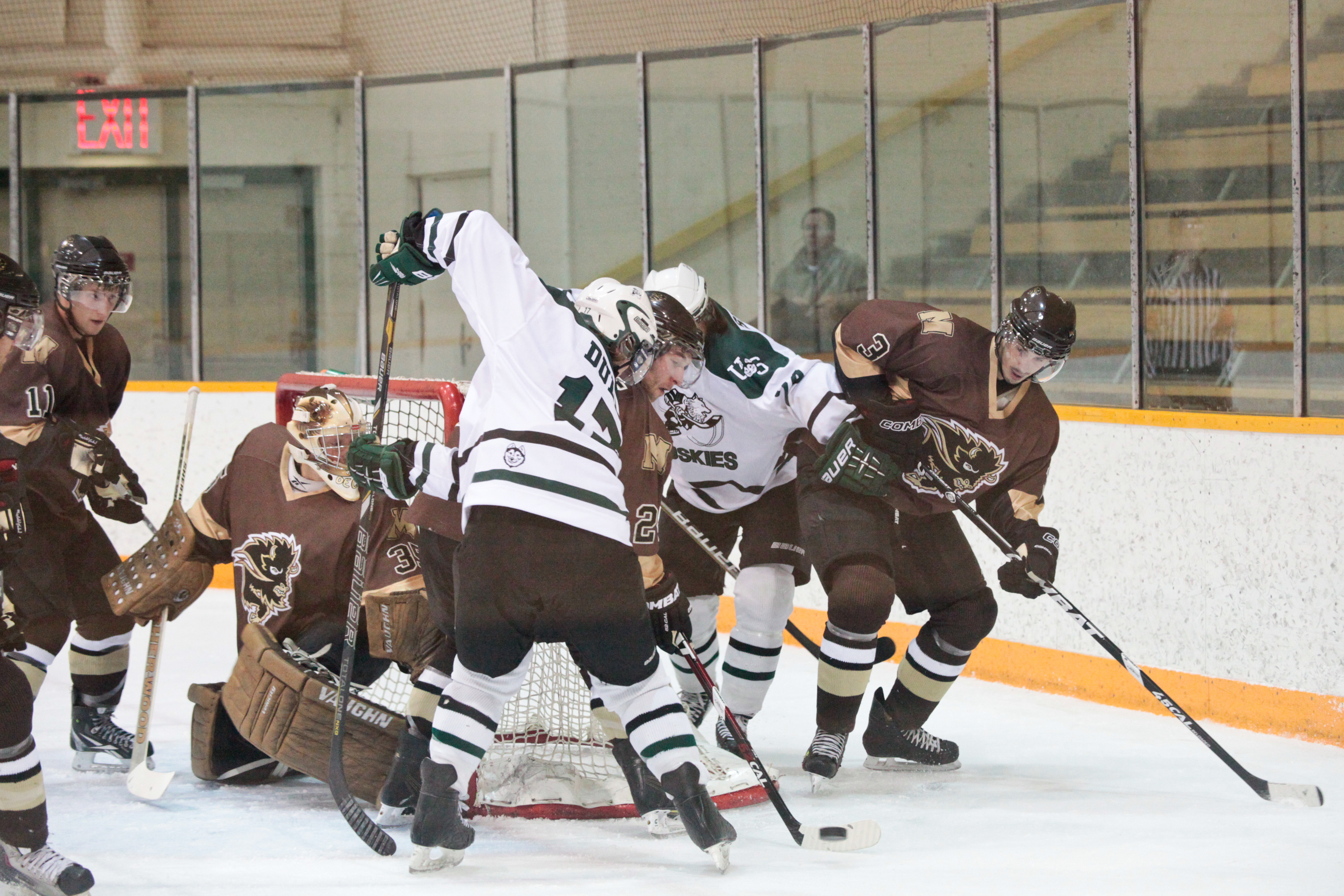 The Bison men’s hockey team entered this past weekend’s two game series against the University of Saskatchewan Huskies after having a bye week in Canada West play. The boys stayed fresh by playing a pair of non-conference exhibition games in the USA, losing 5-3 to the University of North Dakota and playing Bemidji State to a 3-3 tie.

The games in the States seemed to help the 0-2 Bisons squad, as they came out looking sharp on Friday night against the Huskies.

Manitoba was the dominant team throughout the night and were able to maintain consistent pressure in the Saskatchewan zone throughout the first period.

Good physical presence sent Huskies players sprawling about with crushing body checks, as the pressure eventually led to a Bisons goal with three minutes remaining in the first period. A soft floater of a shot by fourth-year player Blair Macaulay found its way passed the glove hand of Huskies goalie Ryan Holfeld.

Holfeld might have been distracted by the boisterous Engineering Faculty Band on the play, as the rowdy bunch were in full voice behind his goal throughout the game.

The Huskies managed to catch the Bisons napping to start the second period, as they evened the score just 19 seconds into the frame and silenced the crowd at Max Bell Centre. A slap pass by Garrett Thiessen found Jimmy Bubnick alone to the right of Bisons goalie Jesse Deckert, and Bubnick was able to walk out front uncontested and slip a backhand shot through the five hole. Moments later the Bisons’ Tyler Dittmer took a stick to the mouth that went unnoticed by the refs and was forced to temporarily leave the game to receive medical attention in the dressing room.

The Bisons and Huskies each took a pair of penalties in the period, but both teams failed to take advantage of the extra man and the game went into the second intermission tied 1-1.

The Bisons appeared to grab the lead at the 18:04 mark of the third period when first-year centre James Henry wrapped the puck around the net and passed Holfeld, but the Huskies managed to knock the net off its moorings to both disallow the goal and somehow evade a delay of game penalty. The Bisons took the lead for real at the 15:14 mark, as nice passing by the top line of Tyler Dittmer, Ian Duval and Blair Macaulay saw Macaulay net his second of the night and third of the year as his linemates picked up assists on the play.

The game continued to get testy as a minor brawl erupted during a Manitoba power play that sent two Bison and one Huskies player to the box, nullifying the remainder of the power play. The Bisons managed to kill off their penalties, but continued to face mounting pressure from the Huskies.

Bisons goalie Deckert made two stellar saves and Del Cowan made a diving block as the Bisons endured an onslaught late in the third. Bisons coach Mike Sirant called timeout with 1:52 remaining after an icing call prevented his team from getting a late line change. The strategy worked, as the Bisons put the game to bed just 20 seconds later. Macaulay and Duval hooked up once again, this time a 2-on-1 resulting in a deft pass from Macaulay to Duval, who deked out the Huskies goalie and slipped a backhander into the vacated net, giving the Bisons a 3-1 lead they would not relinquish.

Game two on Saturday night saw more aggressiveness from the Bisons, but it was the Huskies who capitalized on the few opportunities they had. The Bisons had possession for most of the first period and outshot the Huskies 11-6, but it was Saskatchewan who had the best chance when Deckert robbed Huskies forward Craig McCallum with his glove while on a breakaway.

The Huskies did capitalize on a breakaway in the second period, as Chris Durand broke in after Bisons Captain Dane Crowley blew a tire and slipped a shot passed a sliding Deckert. The Huskies almost made it 2-0 moments later when a sloppy line change lead to a two-man breakaway that was denied by a great pad save by Deckert.

The Huskies scored their second goal of the frame when a shot by McCallum was spilled by Deckert and Brennan Bosch knocked in the rebound. The Bisons got one back before the period was out when a shot by Ian Duval was deflected up by Holfeld, off the legs of Tyler Dittmer and into the net. It appeared referee Ryan Galley had swallowed his whistle during the second period, as numerous questionable hits went uncalled, including a couple of hits from behind that the Bisons bench didn’t like.

The Bisons had numerous opportunities to tie up the score in thethird period, including three power plays, but Ryan Holfeld and the Huskies shut the door to hold on for the 2-1 win.

The Bisons power play went 0-for-6 in the game, and is 3-for-21 on the season. The lack of production with the extra man came back to haunt them in the second game of the series on Saturday night.

The schedule does get easier for the 1-3 Bisons, having now faced the two top ranked teams in Canada West (Alberta was ranked #2 in the nation, Saskatchewan ranked #4), The boys play on the road against Mount Royal this weekemd and then in Calgary following weekend.

The Bisons do not play another game at home until Nov. 9-10 when they host Lethbridge at Max Bell Centre. How to get a job when you have no experience