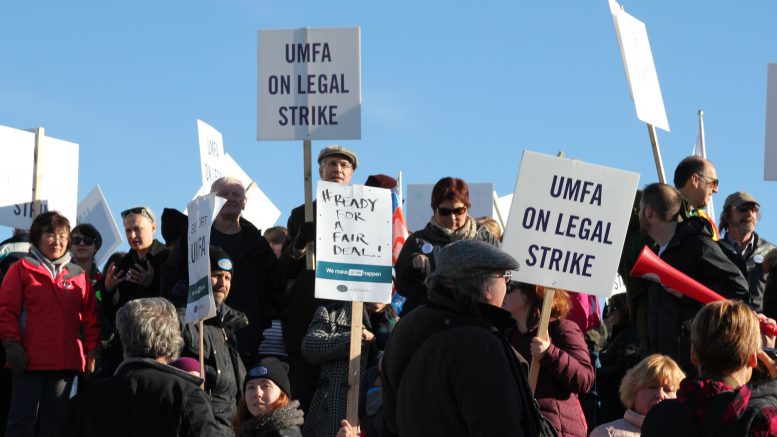 The complaint, which UMFA submitted to the Manitoba Labour Board Monday, details a number of grievances against the university that stem from the government’s actions leading up to an ongoing faculty strike that began Nov. 1.

The complaint states that by following the direction of the provincial government, the university bargained with its employees in bad faith and committed an unfair labour practice.

Since picket lines went up last week, the provincial NDP has continuously questioned Premier Brian Pallister about the government’s role in the events leading up to the strike.

The complaint, which was made public Wednesday, alleges that Gerry Irving, secretary of the public sector compensation committee, made it clear “the university was not to agree to mediation” and the government would not fund binding arbitration between the two sides if it did.

The complaint also claims the government directed  the university to pull back a four-year settlement offer presented to the union in September and “completely withdraw its salary proposal.” The offer included a seven per cent increase over the four-year term.

According to the document, the university repeatedly attempted to convince the government to reconsider its position.

U of M president David Barnard allegedly attempted to telephone the premier more than once but received no answer. The complaint also alleges that Barnard sent a letter to the premier two days before issuing a joint statement with UMFA president Mark Hudson criticizing an “11th hour” government mandate directing the university to extend the faculty contract an additional year without a salary increase. Pallister spoke to reporters following question period, but would not address any specifics of the complaint, instead referring to them as merely accusations aimed to benefit one side of the negotiating table.

“I won’t comment. It’s unhelpful in the middle of a labour dispute,” he said.

“Every effort is being made by our government to reach a resolution here and to assist in any way we can,” he said. “All our behaviour and conduct is aimed towards helping with that goal. So our first concern remains the students at the university and that’s where it will stay.”

Kinew repeated his demand that the government reveal whether or not the allegations were true following question period Wednesday.

“The premier knows the truth and he has it in his power to either repudiate the allegations or to confirm whether they’re, in fact, true,” he told reporters.

“We want to see what the truth is in this case because if there are unnecessary restrictions being put on the negotiations at U of M, then that’s keeping students out of class longer than necessary,” he said.

The complaint also details a list of 10 potential actions UMFA would like the labour board to take to remedy the situation, including ordering the university to compensate UMFA and its members for all costs associated with the strike and write a formal apology to all members of the union for committing unfair labour practices.