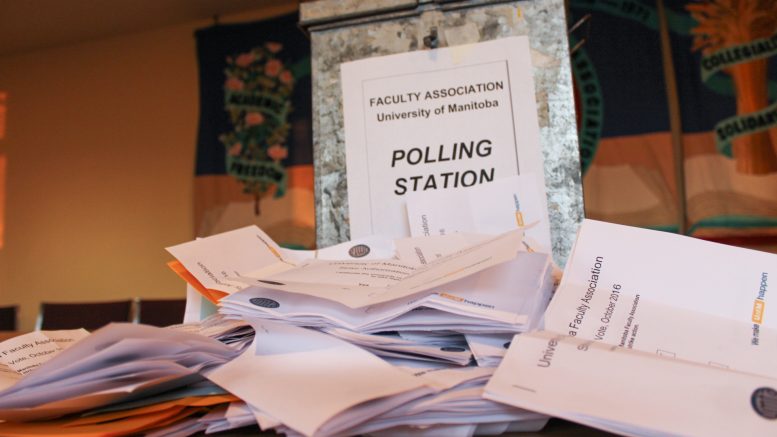 Members of the University of Manitoba Faculty Association (UMFA) have returned a strong strike mandate to their bargaining team as the union continues negotiations with the U of M toward a new collective agreement.

In what the union is calling a historically high level of support, 86 per cent of members who voted over three days last week supported giving the union authority to strike. Nearly two-thirds of the roughly 1,200 faculty, researchers, and librarians represented by UMFA cast ballots.

In the last 15 years, UMFA membership has not returned a strike vote with more than 76 per cent support.

“This was actually stronger than we had even anticipated,” said Mark Hudson, UMFA president, adding that negotiations are ongoing and the association intends to give bargaining every opportunity to succeed.

“I think it’s a pretty powerful reaffirmation of the bargaining priorities,” he said.

“Basically, what it tells us is that the stuff that we’re trying to bargain for at the table are, in fact, issues that are of great concern to our members and that they are of sufficient concern that these folks would be actually willing to back it, if necessary, with strike action.”

The vote comes after the university published details of a four-year offer in September. The offer included a seven per cent salary increase over the four years. Including existing annual increases and proposed competitive salary bumps to address specific areas of need, the average UMFA member’s salary increase would be closer to 17.5 per cent over the contract’s term.

“What we hope this is, is a signal to the administration team that these aren’t issues that we’re going to pass up on lightly,” Hudson said. “They are issues that have been built from the ground up by our membership and the hope is that that strong of a signal will start to shake things loose a bit at the negotiating table.”

John Danakas, the U of M executive director of public affairs, said the university entered into this current round of negotiations with a more proactive approach to reach a timely agreement and is “committed to the belief that a settlement is best reached without having to negatively impact students and their learning.”

Danakas noted the administration proposed a less confrontational, interest-based bargaining model in the winter; forwarded a one-year, salary-only offer that included a 1.5 per cent increase in the spring; and presented the union with the four-year deal with terms similar to those recently accepted by University of Winnipeg faculty all in an effort to reach an agreement without disrupting classes.

All proposals were rejected by the union or returned with amendments.

“We very much understand the anxiety around the uncertainty that labour action brings,” Danakas said.

“We very much understand that. We knew that going in and tried to do things differently this year and it’s quite clear, given the offers made in a timely fashion – but it hasn’t worked and negotiations are ongoing.”

Hudson said UMFA is wary of signing on to a long-term, four-year agreement at a time when the university is preparing to undergo potentially major transformations, including the exploration of a more decentralized budget model.

“Bargaining really is our opportunity to have our voices effectively heard,” he said, adding that the association does not consider a strike lightly.

“There’s some anxiety around the word strike,” he said, “but really, the things that we are negotiating here are of crucial relevance to education at the University of Manitoba.”

The most recent three-year contract between UMFA and the university expired March 31.

Some U of M students are rallying behind UMFA, including the U of M Student Action Network, which began circulating a petition last week and quickly collected more than 400 signatures.

Ian McDonald, a member of the Student Action Network who has been canvassing for signatures, said he supports the faculty’s push to protect quality education and academic freedom but noted there is also a concern about getting more voices at the university’s decision-making table.

“We need to work towards a university where students and workers are collectively making decisions, and it’s not up to just a few people, such as those in the administration, to decide how things are run, whether that’s in the case of teaching loads, tenure criteria, or whatever,” he said in an email.

McDonald lauded the faculty and students who are standing up to an administration he accused of promoting style over policy.

“The direction is the direction of neo-liberalist capitalism, and I’m happy our community is finally creating some obstacles.”

He said students have a responsibility to support UMFA’s push for controls on class size and maintaining academic freedom, which directly impacts students.

“I believe students should start by doing simple things, like signing our petition and not crossing picket lines, but we should be ready to join the picket lines as well,” he said. “And I’d go as far as to say we should start talking among our faculties and departments about more serious shows of support like sympathy strikes.”

Tanjit Nagra, president of the University of Manitoba Students’ Union, briefly addressed the dispute at last week’s regular council meeting, saying she remains neutral in discussions and her biggest concern is assessing the impact a strike would have on students.

The UMSU executive issued a release last week expressing disappointment an agreement has not been reached.

“Throughout these labour negotiations, it is vital that both sides remember that the students are the largest stakeholders during this entire process,” the release stated.

“Students are disappointed to see that months of negotiations have still lead to the potential of a strike, especially in a year whereby new academic policies are being implemented.”

While U of M faculty have not taken to the picket line since 2001, McDonald acknowledged the idea of a strike is concerning for students but said the ends can justify the means.

“Strikes can be worrying but I think students are aware of why it is coming to this,” he said.

“While some are certainly worried, in general I believe students of our generation recognize that employers still have too much power in bargaining, and that to make gains in this unfair system – gains that serve students in the long run – it’s necessary to take action and strikes have historically proven to be an effective action.”

Listen to students and you’ll hear ‘education for all’

U of M would fail service inspection