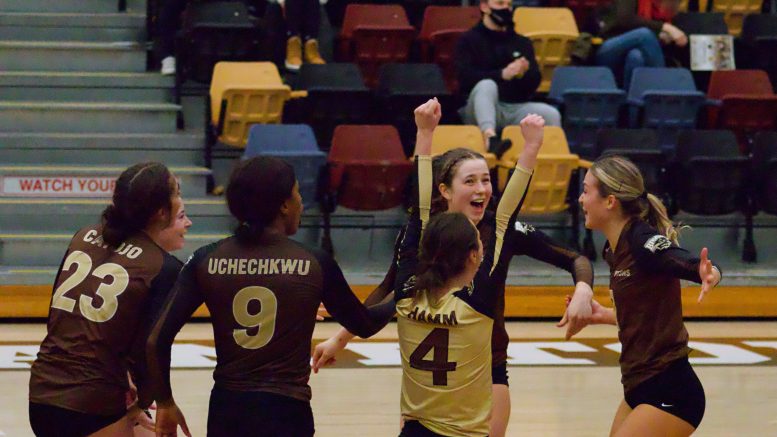 The University of Manitoba Bisons women’s volleyball team split a two-game series against the Brandon University (BU) Bobcats this weekend. BU won on Friday night, while the Bisons returned the favour Saturday in its final home game of the season.

The weekend got off to a rough start for the Bisons. On Friday night, the herd dropped its 10th loss of the year in three straight sets.

The squad found itself down early in the first. After the Bisons committed three straight errors, Bobcat outside hitter Taryn Hannah sent a screaming serve to score an ace and make it 6-3 for the Bobcats. However, the U of M responded well. Second-year players Light Uchechukwu and Keziah Hoeppner came up big, each recording four kills in the set.

After two Bobcat errors brought the Bisons within one, BU took a time-out. The Bobcats went on to win the next three points, giving the team the first set.

In the second, the Bisons responded well, getting out to a 6-2 lead early. However, the Bobcats responded winning the next four straight points, evening the score. The teams traded leads throughout the set, culminating with a deuce at 24. Ten more points were played. The Bisons had the opportunity to win the set twice but were unable to capitalize. After an error by Andi Almonte, an ace by Bobcat Jamie Bain secured the set and gave the Bobcats the opportunity to win the match in the third.

BU made no mistake, dominating with a 25-13 score.

Bobcat left side Rayvn Wiebe notched four of her game-high 16 kills, helping the Bobcats win its sixth game of the year, moving into second place in the eastern division.

The next day’s home game was the final on the regular season schedule for the Bisons women’s team. Ahead of Saturday’s matchup, Uchechukwu touched on how it felt to play in front of the Investors Group Athletic Centre crowd for the final time this year.

“It’s been a long time coming because of COVID and everything, so the fact that it’s the last home game is kind of sad, but it’s going to be fun time.”

Uchechukwu was the Bisons’s best hitter in Friday’s loss with 13 kills. She said keeping it simple and having fun is the key to her and her teammates’success.

“I will try to keep things the same, not overthink it and just go out there and have a little fun with the girls,” said Uchechukwu.

“Brandon is a very good defensive team, so they’re going to dig up a bunch of balls and get all those touches [and] you’ve just got to keep swinging.”

The Bisons got off to an excellent start in game two. Taking advantage of a discombobulated BU defence, the Bisons’s servers wreaked havoc, recording four aces in the first set. Uchechukwu continued to hammer away at the Bobcats’s defenders, recording six kills early for the herd. After a disappointing performance in game one, the Bisons turned its game around and dominated the first set of game two 25-17.

The second set saw much of the same. Led by Hoeppner — who had three aces, six kills and two blocks in the set — the Bisons mercilessly attacked the Bobcats. BU struggled to return serves, allowing the Bisons to pile on points and win the set 25-10.

With the match on the line in the third, the Bobcats attempted the comeback. Danielle Dardis and Kaoane Loch were both dynamic offensively, helping BU keep pace with the U of M throughout the set. As the Bobcats played with urgency, the Bisons amped up the defence by diving for every ball and making incredible plays, including a diving volley by Ella Gray to help save an errant pass and help the herd win a crucial point.

BU continued to play catch-up with the Bisons, finally evening the score at 23 off a Nicole Ashauer kill. The subsequent Bobcat serve did not have enough mustard, finding the net and giving the ball back to the Bisons with match point. On the returned serve, the Bisons made no mistake as Hoeppner spiked a ball past the BU defenders, winning the set and the match for the U of M.

Hoeppner’s game-high 14 kills and Uchechukwu’s 13 led the way on offence for the Bisons, while Gray made her mark on defence with 13 digs.

The win was the fourth on the year and first in straight sets for the Bisons. The team has the opportunity to add two more before the season ends against the University of Regina Cougars in its final two games of the season Feb. 18 and 19.

The U of M: a leader in campus (un)sustainability

U of M consulting students on sexual assault policy