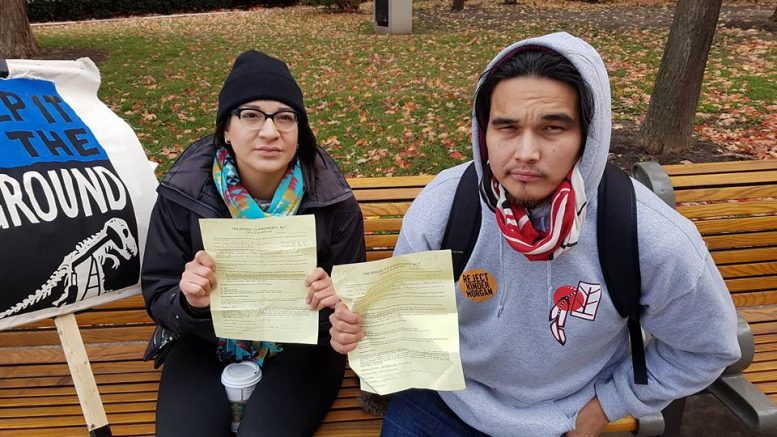 On Oct. 24, two executives and one director from the University of Winnipeg Students’ Association (UWSA) were among a group of young people detained for trespassing in Ottawa while participating in an anti-pipeline demonstration on Parliament Hill.

UWSA president Kevin Settee, UWSA vice-president external affairs Sadie-Phoenix Lavoie, and UWSA business and economics director Mitchell van Ineveld were among the roughly 200 young people – primarily from surrounding regions including Ottawa, Waterloo and Montreal – participating in a demonstration protesting the expansion of a Kinder Morgan pipeline. Ninety-nine of the protestors were detained and given trespass warnings.

In videos from the event, a group of protestors can be seen chanting and holding signs with messages such as ‘climate leaders don’t build pipelines’ while another group of protestors hopped a police barricade with officers waiting to escort them away one by one.

“We had an idea we might be arrested, but we didn’t know for sure,” Settee said when reached in Ottawa. “The officers were saying we’re going to be charged with mischief, but we just got a trespassing charge.”

Settee said the demonstration was organized to pressure the federal government to hold to promises made during the 2015 campaign.

“A lot of people are here right now, standing up, trying to get Justin Trudeau to stick to his word on […] a nation-to-nation relationship and keeping his promises that he got elected on,” he said. “But more importantly, Kinder Morgan, the pipeline, that’s going to be going through pretty soon and we don’t want him to accept it.”

“We want him to protect the land and the water.”

In a video recorded by Lavoie, van Ineveld spoke about the experience after being released.

“I think we got our message across,” he said in the video. “Trudeau can’t ignore us now. A hundred people got arrested on Parliament Hill because he won’t commit to rejecting this pipeline. So, I think we’re going to see some real progress. I’m optimistic.”

Niki Ashton, the NDP MP for Churchill-Keewatinook Aski, posted a message to Facebook in the morning commenting on Settee and Lavoie’s arrest.

“Disgusted that such an act of peaceful protest on Parliament Hill would be punished,” Ashton said. “I used to see this stuff under the Harper government; looks like Trudeau has the same approach. I’ll be raising this with those in charge of security on the Hill.”

Biologist and economist team up to talk about the environment