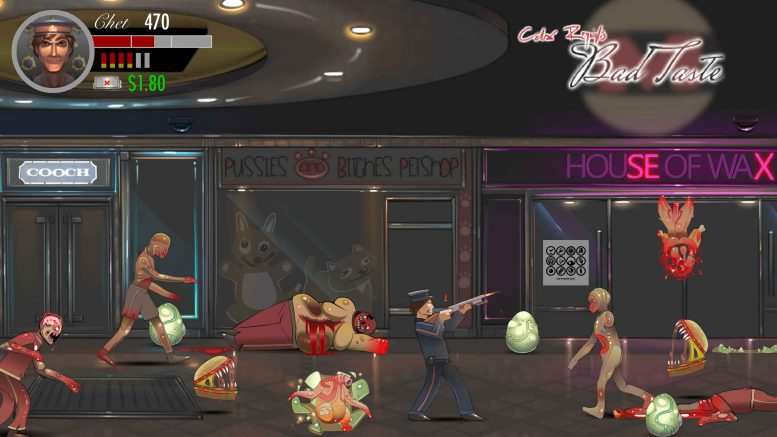 A comic artist’s love for trash cinema, zombies, and Victoria, BC inspired him to develop a video game that pays homage to each. The indie video game, titled Bad Taste as a flippant reference to Peter Jackson’s 1987 horror comedy of the same title, is in the final stages of development.

Bad Taste is a tribute to raw exploitation films that sees the gamer control Chet (played by Spencer Rice), an apathetic cop trying to escape the zombie-infested city of Victoria before it’s hit by a nuclear bomb sent to destroy the epidemic.

The side-scrolling game features 20 levels of zombie action, fully animated cinematics, and beautifully distorted 2D backgrounds that were inspired by real locations in Victoria and surrounding parts of Vancouver Island.

Victoria-based comic artist Celx Requin has been working on the project for over two years. A soft launch has been set for this month.

For Requin, the decision to set the game in Victoria was significant. He believes more Canadian games should actually be set in Canada.

“I live in Victoria. I think it’s a very beautiful city so I figured it would be a good idea to start here. There are very few movies or games that were shot in Canada that are actually set in Canada,” Requin told the Manitoban.

Requin, 27, is a writer, comic artist, web designer, independent game developer and a member of newgrounds.com, a website that hosts videos, games, art, and audio content produced by its members. He has been able to connect and network with several artists from all over the country through the site. In the process, he met and invited Jeremy Zaczek, a Winnipeg-based artist, and Alexander Taylor, an Australian programmer, to partner with him to create the video game.

“I love Jeremy’s artwork. I found him through Newgrounds and thought he just had a cool and distinctive style. I felt his artistic sensibility really matched well with the project so that’s why I reached out to him,” said Requin.

The Victoria-based artist also connected with Kenny Hotz and Spencer Rice (from the Canadian comedy show Kenny vs. Spenny) through the website. Lloyd Kaufman, cofounder of Troma Entertainment – the American horror film company, famous for its low-budget projects and campy style – was also pegged for a role. The actors will be providing voiceovers for characters in the game.

“Spenny found me through my comic books on Newgrounds,” said Requin. “We kind of struck off a friendship. I told about him about my video game project and asked if he would like to come onboard. He said yeah. After a while, I reached out to Kenny, sent him a demo and […] he eventually came onboard too.”

Zaczek, the game’s self-taught animator, was encouraged by the team that had been set up to work on the game. He saw this as a fantastic opportunity to show his strengths and move forward with his career.

“I took care of all the visual stuff. When [Requin] told me about Kenny and Spenny being involved, I got very interested. I figured this was a good chance to show how good I am,” Zaczek told the Manitoban.

In order for the indie game to launch properly, funding was required to keep the project alive and ensure the game stays raw, raunchy, and uncompromised. The game, which has been greenlit by the gaming community on Steam, had an Indiegogo campaign set up to generate needed funds.

An update on the Indiegogo campaign page confirms that work on the game will continue but it will take longer than anticipated.

To watch the trailer and read more information about Bad Taste, visit www.cancer-cinema.com/badtaste and www.twitter.com/cancercinema. To download a free demo, visit https://cancer-cinema.itch.io/bad-taste

The changing world of bullying