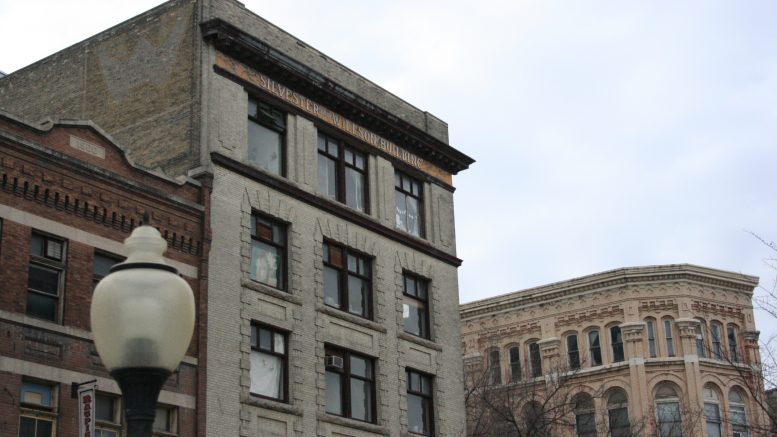 The Exchange District holds many iconic events over the summer months, ranging from Jazz Fest to biking restaurant tours. This year, Exchange District enthusiasts have something new to look forward to – a farmer’s market series.

“The idea was to bring an outdoor market to the Exchange District in a way that is a little bit different than what happens with other outdoor markets,” said David Pensato, Alleyways Market organizer. “It’s been probably circulating in my mind for two or three years.”

The twist? The market takes place in alleyways around the Exchange.

“There are so many events in the Exchange that are focused on Old Market Square, which is an incredible place to be, but there are so many other distinctive aspects to the Exchange, like our alleyways. It’s really wonderful to see these spaces being used for such a great event. These sorts of spaces really add to the character of our national historic site,” said Karen Kornelsen, marketing and communications co-ordinator for Exchange District BIZ.

The event will bring together a mixture of local food vendors and makers in the alleyways. While the market looks to bring in new and exciting options to the neighbourhood, they are not trying to compete with existing businesses in the Exchange.

“We’re not bringing in food trucks or anything like that, it’s all stuff that should complement the local businesses. As we move to different alleyways for subsequent markets, we’ll get other Exchange businesses involved,” said Pensato.

For the first installment, Forth and the Mitchell Block will be serving up some food to market-goers, along with the other vendors being brought in. The market will also bring fresh produce – a rarity for those living downtown.

“To have an event that brings food from farm to table in the downtown area is awesome. We hope people come out and support the local food vendors and support the makers, and really take in the magic of the Exchange,” said Kornelsen.

“I think it’s amazing to have all of this wrapped up in to one event. The Exchange is a meeting place – it is a place where people come together, with the architecture, the shops, the arts and culture. It really attracts people from all over the city. It is a unique place that can offer people a getaway from the norm. When you walk through the Exchange, you’re taking a walk through history.”

The first of the Alleyways Market series is admittedly an experiment for Pensato and his team. They had been floating the idea around with the hope of establishing it next year but due to overwhelming support, they decided to roll it out for this summer.

“It all came together really fast. Tom [Janzen] and I were discussing the idea and he really thought it was a great idea. We weren’t necessarily thinking of having it happen this year – we were just sort of exploring the idea. But there was so much enthusiasm and so much support from everyone from the Exchange District BIZ to residents in the neighbourhood and it all came together,” said Pensato.

“We intend to learn a lot, especially from this first one and over the course of the summer. I really don’t know how it will go. It’s kind of an experiment.”

While he does not know how the first Alleyways Markey installment will go, Pensato hopes that the series will bring people to the Exchange from all over the city, help support the local economy, and promote the businesses in the Exchange.

“I think it’s a really good community-builder for the neighbourhood.”

There will be four Alleyways Markets taking place this summer – one each in June, July, August, and September in various alleyways around the Exchange District. The first alleyways market takes place on June 24 from 4 p.m.-10 p.m. in the alley behind Forth and the Mitchell Block on McDermot. For more information, visit alleywaysmarket.ca

The troublesome notion of modern irony