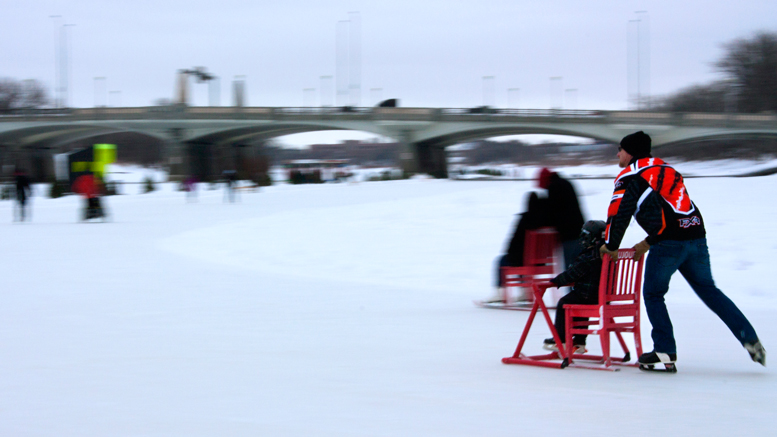 Two groups of University of Manitoba architecture students will have their warming hut designs adorn the Red River skating trail alongside contributions from around the globe.

The faculty of architecture hosted a new instalment in its Food for Thought series on Jan. 28 and unveiled two designs selected to be part of Winnipeg’s “Warming Huts: An Art + Architecture Competition.”

The initiative, sponsored by the Canadian Council for the Arts, is a global competition that brings together architects to submit innovative designs and compete for spots along the Red River’s skating trail.

The two teams from the U of M survived the selection process and are in the early stages of transitioning their designs from blueprints to the ice.

The teams are made up of students but are headed by professors in the faculty of architecture.

One of the homegrown teams included U of M architecture students Brennan Fedak and Alyssa Magas, who presented their warming hut project titled “Basket.”

The designers claim this is the first hut on the river trail that guarantees warmth to its visitors.

“It weaves together concepts of warmth and community […] a collective of the good, bad, and the ugly,” said Fedak, presenting the design.

“It’s a one-to-one scale,” Fedak told the Manitoban. “A lot of our projects are on a huge scale and you don’t actually understand how big they are until you put the pieces together. So it’s a great experience.”

Magas said the project is an opportunity to get out of the classroom and develop some practical experience.

“It’s really exciting for students, especially for those who do a lot of work in classrooms, to see something like this,” she said.

The other U of M selection is titled “Fabrigami” and is meant to capture the essence of architecture and art with its ground-breaking structure.

The “Fabrigami” structure is essentially an extended piece of fabric that lies suspended above the skating trail, held in place by cable net. The net creates folds that mimic traditional origami forms, while the fabric adjusts itself to the environment and carves deep valleys accordingly.

The design team – headed by U of M faculty Lancelot Coar, Kim Wiese and Jason Hare – has plans to coat “Fabrigami” in ice and subsequently release the cables to see if the structure can hold on its own without external supports.

An international addition to the warming huts roster is the “Temple,” from Russia. The creators call the design a homage to ancient Greece, where they say all modern architecture is derived from.

The construct is largely made up of fuel barrels, which constitute the building’s columns. This creative decision was made to reflect the principle of recyclability.

“Temple” is the first ever submission to be accepted by the warming huts judging panel with no accompanying worded description. The designers simply sent in preliminary designs and pictorial representations of the structure.