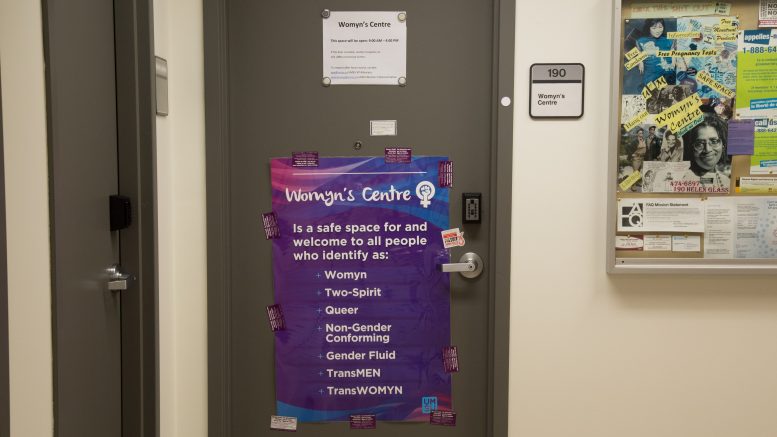 In a statement to the Manitoban, the womyn’s centre collective claims that UMSU “changed the door code to the centre and created open hours from 9-4, leaving no one to watch over the centre to prevent theft and misuse.”

Changes to the organization of the University of Manitoba Student’s Union (UMSU) community groups are being criticized by the Womyn’s Centre Collective, which says the reorganization will “directly threaten our safe space.”

A post published on the Womyn’s Centre Facebook page on Aug. 30 called for the support of the wider community to respond to structural changes coming to the UMSU community coordinator position.

The post was not signed, but published by “the former coordinator of the womyn’s centre.” Taylor Byrnes was the centre’s coordinator in 2015-17. Byrnes did not respond to requests for comment directly but through a statement released by the Womyn’s Centre Collective.

Under the proposed changes, the union will no longer hire a part-time coordinator responsible for each of the four community groups under UMSU. Instead, one full-time coordinator position will be created to cover all four groups.

The four community groups include the Womyn’s Centre, the University of Manitoba Aboriginal Students Association, Rainbow Pride Mosaic, and the Student Accessibility Centre.

UMSU president Tanjit Nagra said the organizational changes are the union’s response to students who said the centres were not serving their intended purpose.

The Facebook post claims the decision was made by UMSU “without the consent or consultation of each community,” and that community members are heading into the school year entirely unaware of the changes.

The post also expressed concern in regards to the increased workload and responsibilities that would be passed along to UMSU community representatives and members as a result of the change.

In a statement sent to the Manitoban signed by the Womyn’s Centre Collective, the group outlined its concerns, saying “UMSU lied about these changes and went behind our backs to completely change the way our safe space operates.”

The Womyn’s Centre Collective further accused UMSU of violating its own bylaws by not allowing the university’s community groups to operate independently under their own constitution and claimed the union “infringed on the rights of the many students who make use of these space.”

The statement further notes that UMSU “changed the door code to the centre and created open hours from 9-4, leaving no one to watch over the centre to prevent theft and misuse.”

After the Aug. 30 post was published, a letter was issued to the former coordinator from UMSU legal counsel, who is demanding that no more posts be published and administrator control of the account returned to the union.

UMSU has since created a new Facebook page for the community group.

UMSU president Tanjit Nagra said the union is “not pursuing legal action at this time” and rebutted the charge students were not consulted.

“We actually heard from quite a bit of students that they felt the spaces were unwelcoming,” she said. “They felt that they weren’t serving the purpose that they were originally created for.”

Calling the change to the community coordinator position “minor,” UMSU vice president advocacy Allison Kilgour said it will “make the centres a lot more accessible since we’re actually going to have someone here to make sure they’re open, regular business hours, always have someone on hand to deal with day-to-day problems.”

“One thing from a governance angle that I really saw and wanted to fix was the disconnect between the elected representative for the community verses the coordinator and the actual folks that go to the centres,” said Nagra.

Nagra added that if the proposed arrangement fails, UMSU will reevaluate and consult with community members.

Both Kilgour and Nagra agree the change will allow the elected community representative s to focus on advocacy.

“One of the misconceptions, I think, was that that the rep is suddenly going to have a lot more responsibilities,” said Kilgour.

“When really what the job description has always been, in our bylaws, is, you know, to kind of be the face for the community, to kind of lead the initiatives, chair the meetings, and work with the collective.”

Kilgour pointed out that the elected representative is meant to act as the point person for the respective community and that this role has shifted to the coordinator in the past few years.

Kilgour said the job description for the new position outlines that the person must be an ally to each of the different groups, must have an understanding of the issues they face, and, if needed, must be willing to undergo training to address any concerns on those accounts.

“It’s important to know that we definitely really tried our best to involve our community in on these decisions,” Nagra said.

“We did make sure that we spoke extensively with all of the elected reps and had their consent and their agreement to this before we went forward,” she added.