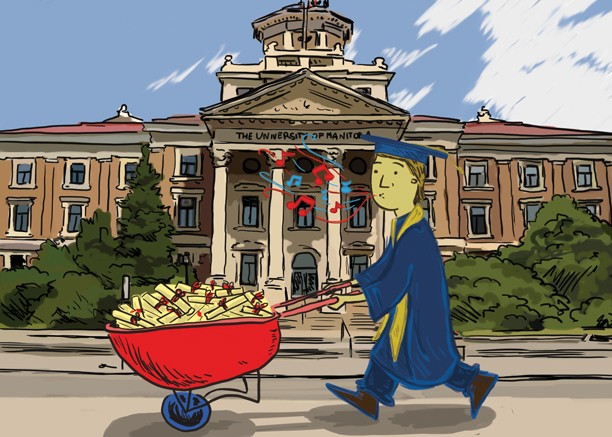 The reputation of the University of Manitoba has been damaged by recent news stories about the rise in academic dishonesty and admission changes in the faculty of education. This affects us as future graduates because, when it comes to getting jobs, our degrees are only as good as prospective employers think they are. When the reputation of the university suffers, so does the value of our degrees.

The Manitoban ran a story about the rise in academic dishonesty in the Feb. 10 issue. The numbers were ridiculous. In the 2014-15 school year, there were 785 incidents of academic dishonesty. Of those, 20 were people caught writing an exam for someone else. 20! Naturally, this leads people to wonder just how many cases of exam impersonation weren’t caught.

785 incidents of academic dishonesty is a lot. It makes us all look bad.

People can rationalize these numbers and put them into context. 785 incidents of academic dishonesty is very small relative to the hundreds of thousands of assignments, essays, and exams that are submitted within the entire university every year. As well, the numbers reflect the root causes of academic dishonesty, such as societal pressure to achieve high marks.

But employers aren’t interested in blaming society for academic dishonesty. They’re concerned about hiring cheaters into their workplace.

More damaging to the university’s reputation are the changes to admissions in the faculty of education, which is increasing its special consideration spots from 10 per cent to 45 per cent.

Stories about different admission standards for different people hurt the academic credibility of the university. When up to 45 per cent of the class is admitted because of diversity, there’s a nearly 1 in 2 chance that a student is there because they self-identify as a member of a certain group.

Education graduates will face the suspicion of being diversity admissions, and the accompanying questions about whether they actually deserved to be admitted. That’s a stigma that graduates shouldn’t have to deal with.

As bad as these news stories are, they don’t matter much to students wanting to stay local after graduation. The U of M is the Harvard of Manitoba. The other universities are either too artsy, too rural, or too religious. It will take more than a few negative stories to bring down the U of M’s local reputation to the level of the other universities. A degree from the U of M is still accepted by the large provincial employers, like the provincial government, crown corporations, and the U of M itself, as the gold standard.

The U of M’s reputation becomes an issue for students seeking jobs outside of Manitoba. Despite five years of “trailblazer” campaigns, the U of M is known nationally as the perennial loser in the Maclean’s university rankings . Stories about academic dishonesty and flexible admission standards serve to confirm U of M’s low standing in people’s minds.

It would be great if the U of M got serious about protecting its local, and improving its national, reputation. It could get tough on cheaters, straighten out admissions policies, and work on the areas that Maclean’s takes into consideration. But that’s not going to happen, because the university has little incentive to do so.

The U of M is a regional university. It exists to serve the Manitoba market. The vast majority of students admitted to the U of M graduated from Manitoba high schools. As long as the university has a better local reputation than its artsy, rural, and religious counterparts, degrees from the U of M will still get grads jobs.

Improving the university’s national reputation only makes it easier for graduates to leave and get jobs elsewhere. Losing young people to other provinces is already an issue for Manitoba. Making U of M grads more attractive to the rest of Canada is not high on the provincial priority list. Instead, the university moves weakly against cheaters, praises diversity, and ignores the Maclean’s rankings.

Volunteer with the ELC’s Language Partner’s program: Help an international student and learn some culture in return

U of M announces major in data science