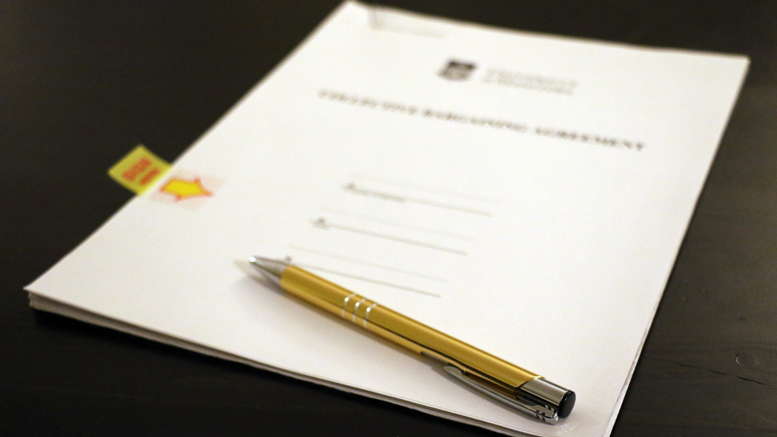 After more than a dozen meetings and nearly 100 hours at the bargaining table, the Association of Employees Supporting Education Services (AESES) and the University of Manitoba have reached a new collective bargaining agreement.

In December, AESES members voted 91 per cent in favour of the four-year deal retroactive to April 5, 2015. The contract includes modest increases of 1.5, 1, 1.5, and 2 per cent annually until the deal expires in April 2019. Top-tier members will receive an extra 0.25 per cent on March 25, 2016, to bring their salaries in line with other members’ increases.

“Certainly, we would have liked to have seen a larger salary increase for our membership and closing the compensation gap between our membership and some of the other working groups at the university is something that future bargaining committees will strive to address,” AESES president Laurie Morris told the Manitoban in an email.

According to Morris, the chief gains in the new contract include an agreement to convene a joint committee to review employment classifications and improve the wording for clarification purposes.

AESES represents about 2,500 full- and part-time employees working throughout numerous departments on campus, including clerical and administrative, technical, and security services, among others. The union also provides support services to the university community.

Morris also noted the new agreement includes language allowing the association president to be released from 50 per cent of their work duties to devote time to union responsibilities.

Morris said the only contentious issue concerned the existing discipline process, which membership argued was not being used consistently by managers and supervisors.

“There was a perception that the process was too difficult and restrictive to be used successfully,” she said, noting that it was determined managers and supervisors will receive additional training.

During the meetings, the main issues were bargained through interest-based negotiations, an approach based on the idea that each group has its own priorities. Each side examines its own interests while learning about the concerns of the other and works to find a mutually beneficial solution.

AESES has used this approach for approximately the last six contracts. This time, the bargaining process lasted 10 months.

“It allows an issue to be broken down and discussed thoroughly leading to a better understanding from both sides,” said Morris.

“It comes down to both parties being willing to follow the process and being respectful to each other,” she said.