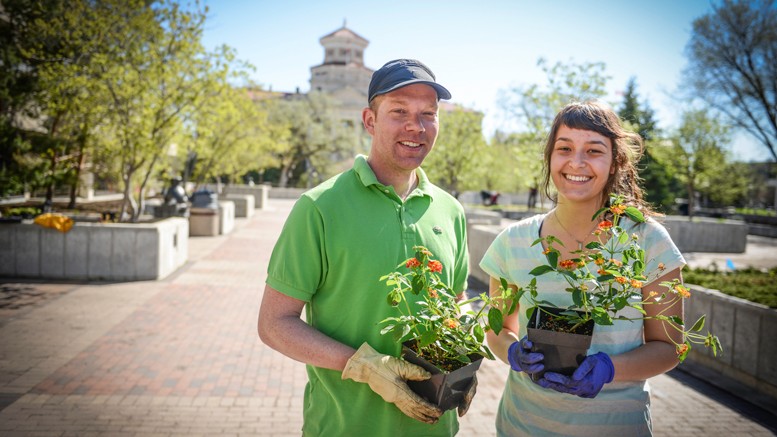 U of M office of sustainability director Ian Hall, pictured with an intern. Photo by Mike Latschislaw

The efforts of the University of Manitoba’s office of sustainability have been rewarded with a silver rating from the Association for the Advancement of Sustainability in Higher Education (AASHE).

In his report to the board of governors at its regular meeting Nov. 24, office of sustainability director Ian Hall said the silver rating is an indication of the work completed by the sustainability office, which is responsible for managing the university’s environmental footprint.

Through its Sustainability Tracking, Assessment and Rating System, the AASHE measures the performance of universities and colleges with a scoring system focusing on four categories – planning and administration, engagement, academics, and operations. A minimum score of 25 earns a bronze rating, while an 85 draws a platinum recognition.

The U of M scored a 52.56 for its silver rating and Hall acknowledged to the board of governors the evaluation exercise also identified areas for improvement, including the accounting of carbon emissions, which he boasted have dropped 33 per cent per square foot.

The office of sustainability is responsible for the planning and monitoring of the university’s environmental impact – either directly or by working with partners – and to enhance the social, environmental and economic outcomes of its activities.

Hall said the office has made progress in the area of waste management and recycling, noting the physical plant reported a 40-per cent year-over-year reduction in waste sent to the landfill for the month of September 2015.
“Earlier this academic year, we worked with our partners in physical plant to redesign the recycling and waste management system, providing new, easier opportunities to recycle materials,” said Hall.

Other sustainability programs include outreach and engagement campaigns, the completion of a range of bicycle parking improvements, a site tour of the Brady Road Resource Management Facility, and partnering with human resources, student affairs, and active living to develop a new Living Well web portal.

Hall said other programs are in the test phase, including a green office program allowing campus offices to measure their own performance and develop mini action plans, and a sustainability research-in-action program.

“The sustainability office is doing an excellent job in making the campus sustainable,” he said. “They have played a significant role in promoting awareness. I work very closely with the sustainability office and I am extremely proud of their commitment to promote best environmental practices at the U of M.”
However, Thapa criticized what he described as “unhealthy, highly processed, and expensive” food served at the Campo food outlet in University Centre and called on the university to pressure the food service provider to offer a more sustainable menu.

During his update to the board of governors, Hall addressed the sustainability office’s involvement with the UMSU-endorsed Divest Manitoba campaign, which aims to see the university unwind its $64-million stake in oil, gas, and coal industries.

Hall told the board his office is studying similar campaigns, which have emerged in more than 20 universities country-wide, while at the same time gathering information on alternative tactics.

“The issue is evolving and we are all learning more about the issue,” Hall told the Manitoban. “So at this point, I can say that the office is strongly supportive of having conversations about integration of sustainability into all aspects of our university, realizing that divestment is one approach to achieving this integration in the field of investment management.”

He added the university is working on reducing its oil and gas consumption, which he estimated at near $10 million annually.

“So we are constantly monitoring what is happening – especially at other Canadian institutions,” he said.
Under the banner Divest Manitoba, the campaign was endorsed by UMSU council in the spring of 2015. It got underway in earnest in the fall and has already drummed up overwhelming support, said Thapa, its chief proponent within the union.

“I am completely overwhelmed by the support shown by students, staff, and faculty members at the University of Manitoba towards the fossil fuel divestment campaign,” he said. “It is an absolute privilege and honour to lead this campaign and help persuade the university to divest their funds from fossil fuel companies.”

Thapa noted more than 1,000 students, staff, and community members have pledged support to the campaign through petitions, letters, and social media outlets. Organizers are in the process of drafting a letter urging the board of governors to freeze further investments in fossil fuel-related operations and implement a five-year plan to divest completely, he said.

“It is extremely important to understand that the fossil fuel divestment campaign is more than an economic issue,” Thapa said, adding that it’s incumbent upon the university to take a leadership role on environmental sustainability.

“The student union is committed to ensuring that our future generations can be proud of the actions we take today,” he said. “Fossil fuel divestment makes social, economic, and environmental sense.”

“I don’t see any negative implications of fossil fuel divestment. On the contrary I believe that it is the right thing to do and the U of M should be a pioneer on this front.”

There Will Be Lawyers