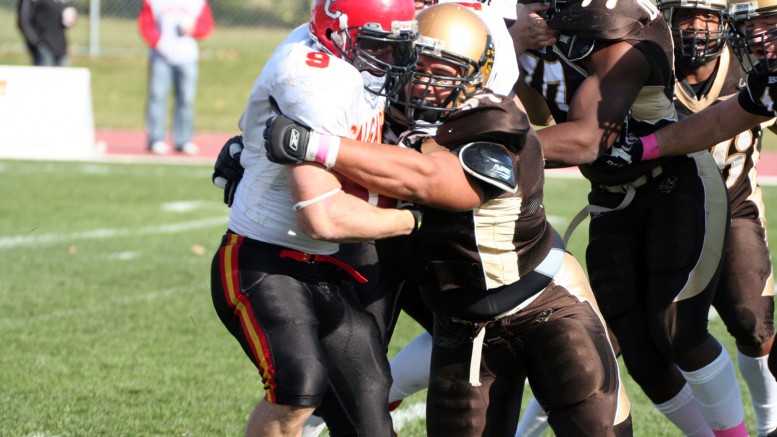 Eddie Steele during his time with the Bisons. Photo by Bison Sports

The 103rd Grey Cup on Sunday, held at Investors Group Field in Winnipeg, signified a homecoming for three former Bisons football players, as Ottawa running back Kienan LaFrance and Edmonton defensive tackles Eddie Steele and Don Oramasionwu all got the chance to return to the province where their football careers started.

LaFrance – who didn’t strap on the pads for the first time until age 15 – won a Winnipeg High School Football League (WHSFL) title in 2008 with the Sturgeon Heights Huskies, before playing two seasons with the Winnipeg Rifles (2009-10) of the Prairie Football Conference and then another four years (2011-14) with the Bisons.

He was a conference all-star in his final season with the herd, amassing 785 rushing yards along with 10 total touchdowns.

This past May, LaFrance was drafted by the East Division’s Ottawa Redblacks in the sixth round of the CFL draft and finished his rookie season second on the depth chart, with 86 all-purpose yards. Kienan LaFrance during his time with Manitoba. Photo by Jeff Miller

On the West Division’s side were two players whose football journeys have been interlocked ever since high school.

Oramasoinwu is two years senior to Steele, however both attended Kelvin High School where they played two years together on the Clippers WHSFL team.

“I remember the day I met [Steele] at Kelvin High School. We were just training and my coach introduced me to him. He was just a little kid with an afro,” Oramasionwu said prior to the game. “I took him under my wing, and every level we’ve been together at some point in time, so it’s pretty cool too.”

Oramasionwu moved on to the Bisons program, but would be joined by Steele not long after. The highlight of their time with the herd occurred in 2007, where the duo won the Vanier Cup.

Being the elder, Oramasionwu was asked if he shared any tricks of the trade with Steele.

While their CFL journeys started on different teams, the pair of defensive tackles eventually came back together in 2014 when the Eskimos acquired them both. One year later, they landed themselves back on home soil for the Grey Cup.

“It’s pretty neat. The fact that we played high school ball together, played on the Bison field back here together, and now we’re at the Grey Cup in Winnipeg together, it’s pretty cool. It’s like a movie, it doesn’t happen often,” Steele said. Don Oramasionwu with the Bisons. Photo by Bison Sports.

Year in review: Revisiting the biggest stories of 2018