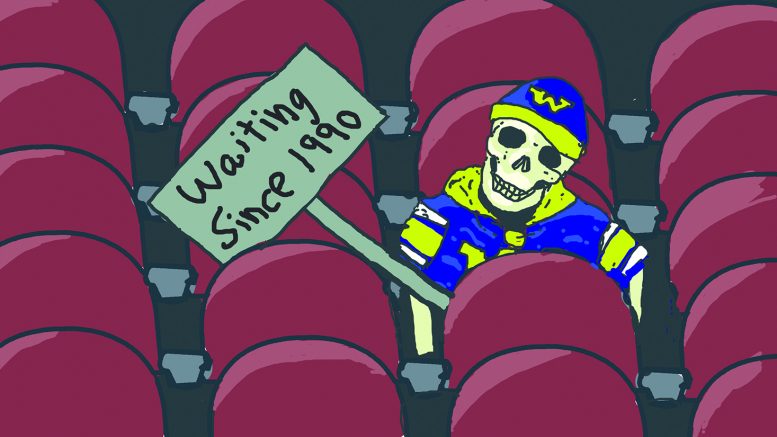 On Nov. 2, the Chicago Cubs won game seven of the World Series over the Cleveland Indians. The Cubs finally broke the curse, and it only took them 108 years to do so, which was the longest active championship drought in all major sports. The Bombers have not won the Grey Cup since 1990, 26 years ago, which is nothing compared to how long Cubs fans had to wait. With the Bombers crashing out of the 2016 playoffs after not even making it for the past five seasons, Winnipeg football fans look over to Chicago perhaps a little green with envy.

Both teams have come close to winning it all in their quest for the ultimate prize in their respective leagues throughout the years. The Bombers can only hope they can replicate the success of the Cubs this past season.

Before this year the Cubs last won the World Series in 1908. The club had made seven World Series appearances since then, and many would argue that it would have been eight times if it wasn’t for the infamous Steve Bartman incident on Oct. 14, 2003. The Cubs were up 3-0 in the eighth inning in game six of the National League Championship Series, and all they needed was a win to move on to the World Series. The Marlins hit a foul ball, and outfielder Moises Alou tried to catch it, but the ball was interfered with by Bartman in the stands, which made it a dead ball. That would have been the second out of the inning. The Marlins put up eight runs, and won the game 8-3 before taking game seven of the series. Luck didn’t seem to be on the side of the Cubs back in 2003.

1990 was the last time Winnipeg brought home the Grey Cup, but the team has had five other chances to win it all, and failed. The year that Bomber fans believe they should have won the Grey Cup was in 2007, the year that Kevin Glenn got injured late in the East Division Final, forcing backup Ryan Dinwiddie to start the big game. Lady luck was cruel to the Bombers, as Dinwiddie threw three interceptions in the game, and the blue and gold lost 23-19 to the Saskatchewan Roughriders. Both the Cubs and the Bombers have come within inches to winning it all in their quest for the ultimate prize in their respective leagues throughout the years.

The 2016 Cubs benefited from the World Series experience that starting pitchers Jon Lester and John Lackey and catcher David Ross brought with them from the Boston Red Sox. World Series MVP Ben Zobrist won it all with the Kansas City Royals last season. Chicago had veteran management during their 2016 run as well. Team president Theo Epstein brought his winning formula from Boston to Wrigley Field. He was in charge when the Red Sox broke their 86-year championship drought. Cubs manager Joe Maddon also brought experience as he led Tampa Bay to the World Series in 2008, but lost to Philadelphia in five games.

Experience is big, as you’ve seen from the 2016 Cubs, and the Bombers had that with running back Andrew Harris who won the Grey Cup in 2011 with the B.C. Lions. Head coach Mike O’Shea also had Grey Cup coaching experience, and he won with the Toronto Argos in 2010 as their special teams coach. Offensive lineman Stanley Bryant and newly-acquired Weston Dressler also have their names on the Grey Cup. It didn’t help Winnipeg this season, but there is always next season – a saying most Bomber fans are probably sick and tired of hearing.

Besides the experienced players, Chicago also had Jake Arrieta and Aroldis Chapman who pitched lights out almost every time they took the mound. Arrieta had a no-hitter through five innings of work in game two of the World Series, and Chapman shut the door almost every time he was called upon.

The Bombers finally had a quarterback they could count on in Matt Nichols. He is very careful with the ball and avoids turnovers; his injuries appeared to be a thing of the past, so with Nichols healthy the blue and gold may be able to avoid another Dinwiddie incident. Bombers management might want to add a few more players this off-season before they can call themselves Grey Cup champions again.

Saskatchewan Huskies get revenge in rematch with Manitoba Bisons

Thunderbirds edge out Bisons in a thriller

Teague Sherman ready to fly with the Bombers