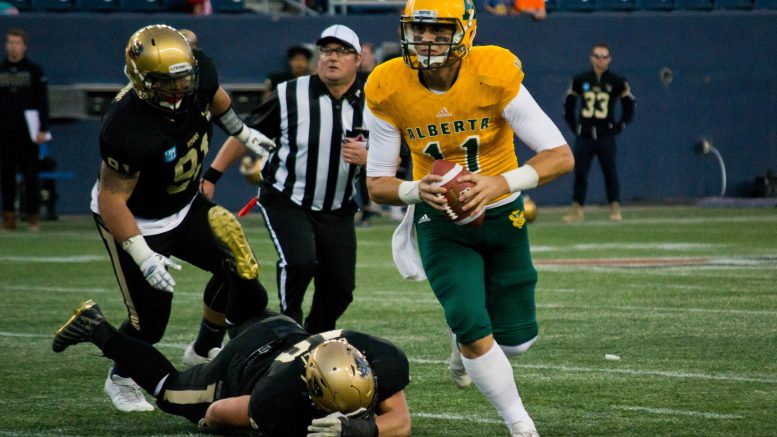 It was a game full of mistakes and missed tackles between the two Canada West basement dwellers. With the loss, Manitoba falls to 1-4. The Golden Bears earned their first win of the season to move to 1-4.

After a gritty 18-16 road victory against the nationally ranked University of Regina Rams two weeks ago, everyone was feeling good, but the loss shook the Bison locker room.

Catellier, making his second straight start, threw for 238 yards, adding to his resume a touchdown and interception. It was the Bisons defence that let the club down, allowing the Golden Bears nearly 600 yards in total offence.

Ed Ilnicki torched the hometown Bisons on the ground, rushing 44 times for 278 yards and a touchdown. He added five receptions for 63 yards in the air. Alberta continued to return to Ilnicki and even though the Bisons appeared to have him stopped, but he kept barreling through the Bison front seven.

“Today, it was like a steamroller ran over us, that’s how it felt. Kudos to Alberta, they were on a mission to win the game and they won it from the beginning.”

Alberta jumped out to a 5-0 lead in the first quarter, but the Bisons marched back, earning a safety, and then then a one-yard touchdown run from Theo Deezar to make the score 8-5.

Alberta scored on their first possession of the second quarter, with Brad Baker hooking up with Nathan Rowe on a 19 yard pass to the endzone. A few minutes later, Manitoba Shai Ross caught a 13 yard Catellier pass in the house to cap off a six-play, 61-yard drive.

Manitoba led 15-13 at the half, but it didn’t feel like it in the locker room.

“My sense of coming out [at the half] was that we were the team that was behind,” Dobie said. “We came out of the locker at halftime with the lead and it didn’t feel like we had the lead emotionally.”

After exchanging field goals in the third quarter, the Bisons maintained their slender margin. On the first possession of the fourth quarter, Bison running back Somto Anyadike busted open for a 33-yard touchdown run that energized the Bisons bench.

The momentum didn’t last long, with the Bears marching back 77 yards down the field and Ilnicki punching home a two-yard run to make it 25-22.

“It was all excitement on the bench,” Catellier said. “We thought all we had to do was close out the game a little bit but, credit to [Alberta] they fought back and they went in and just destroyed that momentum.”

Alberta marched down the field again a few minutes later, with Rowe and Baker connecting again to erase the Bisons lead. Rowe got his third touchdown of the night with two minutes remaining to put the nail in the coffin of Manitoba.

“This was a classic case of a flat team today,” Dobie said. “We kept holding on, even then, we were flat. We were very flat.”

Manitoba heads into a bye week before heading into Calgary to play the University of Calgary Dinos on Oct. 14.