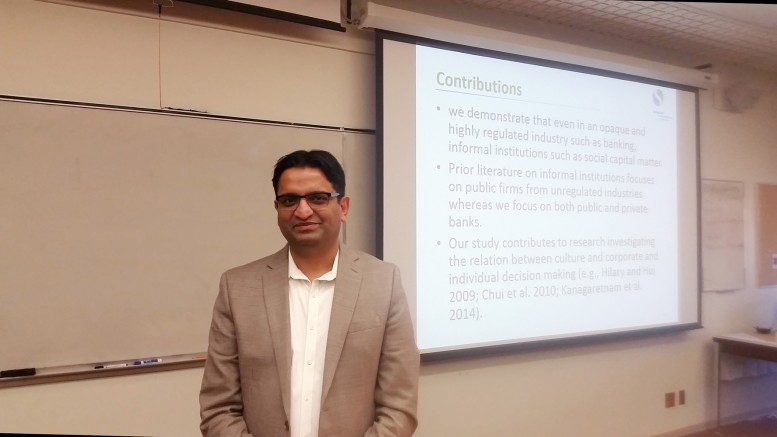 Guest lecturer Kiridaran Kanagaretnam, professor of accounting from the Schulich school of business at York University. Photo by Samuel Osho.

The link between social capital and accounting transparency in public and private banks was uncovered in a recent lecture at the U of M, including its implication for contemporary Canadian society.

He conducted the research alongside Justin Y. Jin, associate professor in the DeGroote school of business at McMaster University and Gerald Lobo, professor in the C.T. Bauer college of business at the University of Houston. Kanagaretnam’s current research interests involve financial reporting by banks, auditing, corporate governance, executive compensation, and trust and reciprocity within organizations.

The Organization of Economic Cooperation and Development defines social capital as “the links, shared values, and understandings in society that enable individuals and groups to trust each other and so work together.”

Similarly, Kanagaretnam and his research partners describe social capital as the value norms and personal networks that facilitate collective action, making a distinction between areas with high social capital and those with low social capital. In high social capital areas, there are much denser networks of individuals, ensuring higher levels of trust. In such an area, self-serving and excessive risk-taking goes unrewarded and financial institutions are more likely to be transparent with their accounting practices.

Kanagaretnam elucidated the two focal points of his research work in his lecture at the Drake Centre last week.

They used past research to construct a social capital index for each U.S. county as well as various accounting reports to measure the relative level of bank transparency. The authors then compared this data with accounting data from the commercial quarterly reports available from the Federal Reserve Bank of Chicago, ultimately finding a strong correlation between social capital, bank accounting transparency and low levels of risk-taking behavior.

Kanagaretnam and his colleagues used a sample of 50,626 bank year observations between 2000 and 2009.

Kanagaretnam further stressed that banks in American counties with high social capital displayed lower levels of risk taking and hence they were less prone to failure or financial trouble during the crisis period. He added that the research reveals that social capital needs to be taken into consideration at all levels when making financial decisions.

Kanagaretnam told the Manitoban that he believes that Canadian banks are adequately transparent for their clients and the wider public but said that more education about the importance of social capital and proper accounting practices is needed.

Kanagaretnam also highlighted the ability of social capital to assist government at all levels in tackling tax avoidance.

There’s an election going on?

U of M faculty reduction may become reality