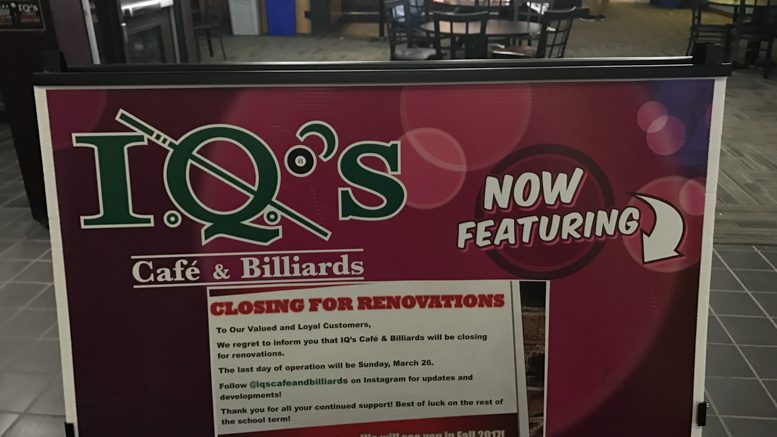 IQ’s Café & Billiards, located on the third floor of University Centre, is closing temporarily for renovations that will take place over the summer.

According to an official press release, this will be the first major renovation to the café in 18 years.

The upgrades were first proposed by the 2015-16 University of Manitoba Students’ Union (UMSU) council, with final plans, financing, and construction approved by the current council.

In January, UMSU council approved spending up to $1 million on the renovations.

UMSU president Tanjit Nagra said the renovations were initially scheduled to take place last year, but were postponed after council members jointly agreed that it “was best to hold off and take their time finalizing the project over this school year.”

Nagra said that IQ’s will reopen for the fall session, just before the start of classes, and with better facilities in place to enhance student experience.

In the meantime, accommodations will be put in place to ensure that students and staff are not affected by the closure.

“Students will be welcomed by a new, inviting and brightened space,” Nagra said in an email. “The renovated space will have more open space for students to study or catch up with friends.”

“The current UMSUshi space will be converted into [a] kiosk with more ‘grab-and-go’ food options, bubble tea, and coffee,” she said.

Nagra also added that current staff of IQ’s will be reassigned to other UMSU businesses while the renovations last.

Nagra said the union is also taking other accommodations into consideration, like increasing the hours of operation at other UMSU businesses.

“We are considering adjusting the hours for GPA’s Convenience Store for exam period,” she said. “As well, the Starbucks Coffee offered at IQ’s should be available at GPA’s very soon – though this will be limited to coffee as opposed to other forms of mixed drinks.”

“For those in search of a quick bite to eat or a cup of coffee it has been as simple as going to Degrees instead, and there has already been a noticeable increase in traffic at the coffee counter,” she said.

In the press release, Nagra expressed excitement and commended the long-awaited move.

“We are hoping we see an increase in student use of the space,” she said.

“These renovations will make IQ’s more open and inclusive and the expected increase in use will allow UMSU to reinvest in student services.”

The study of evil: U of M course deals with the tough topic of evil