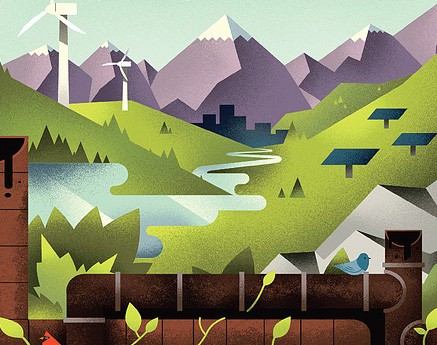 Cover of After the Sands by Gordon Laxer.

Over the past several years discussion about Canada’s energy policy has largely centred around the Alberta tar sands, with people asking how to deal with them.

For Gordon Laxer – founding director and former head of the Parkland Institute and professor emeritus in the department of sociology at the University of Alberta – there’s a much more interesting question to answer: what comes after the sands?

Laxer comes to Winnipeg Nov. 18 to promote his new book After the Sands: Energy and Ecological Security for Canadians, which was released in September.

Laxer’s previous books include Freezing in the Dark: Energy Security for Canadians, Not for Sale: Decommodifying Public Life (which he co-edited with Dennis Soron), and Open for Business: The Roots of Foreign Ownership in Canada, which won the Canadian Sociological Association’s John Porter Award.

When asked how his new book fit in with the work of other Canadian authors writing about energy and ecological issues, Laxer told the Manitoban that “it’s complementary but it brings something new.”

Specifically, After the Sands looks at the future of energy in Canada using an “energy and ecological security point of view,” according to Laxer.

Laxer argues that Canada should move “into self-sufficiency and get off its centuries-old resource-exporting paradigm, or fetish.”

“The Harper government did nothing to tackle that […] and neither did the Martin and Chrétien governments.”

Laxer was critical of Canada’s current approach to energy which he characterized as an extraction/export dynamic and suggested the country should prepare strategic petroleum reserves in preparation for energy shortages, while transitioning to renewable energies.

“What I advocate in this book is moving to a self-sufficiency perspective where we supply Canadians with their own domestic, conventional, non-fracked oil. And luckily in this country, we produce about as much conventional oil, non-fracked, as Canadians consume,” Laxer said.

“So we could then end the oil imports to give energy security to eastern Canadians. And that conventional oil is slowly declining and we should reduce Canadians’ oil usage at at least the same rate as that decline as a transition to the low-carbon society in the next two or three decades.”

There is support among Canadians for change to a more ecologically sound and energy-secure system, according to Laxer.

“The younger generation sees climate action much more urgently than the older generations do and that’s a good thing. Canadians are, I guess, sort of living the good life and they’re just putting off taking the action of what we have to do. I think there seems to be a move at the international level, and Canadians want to not be totally off-side with what other countries are doing. We don’t want to be seen as an environmental rogue state, which we are at the moment.”

Despite the lack of progress from the federal government Laxer characterizes himself as an optimist on the issue of dealing with energy scarcity and climate change.

“If you look at the cover of my book, I asked them to have an optimistic cover. There’s a lot of books that have been written like the ‘The End of –.’ ‘The End of Nature,’ ‘The End of –’ whatever, you know. Armageddon coming and that.”

“The problem is in our Western culture there’s two kinds of paradigms that people have: they either have the progress myth, that we’re going to get better with every generation and technology or if that doesn’t happen we’re going to have Armageddon. Well neither of those is useful. We have to get off those kicks. We have made major shifts in the past, and even rapid shifts, when we’re determined. We did it in the Second World War for example.”

Laxer said that, in line with his optimistic outlook, his book outlines solutions for our energy and ecological insecurity, specifically “how we can get to a low-carbon society, and how, in fact, we can be living as good a life, or perhaps better, than we are now.”

Gordon Laxer will be at McNally Robinson on Wednesday, Nov. 18 at 7:30 p.m. to speak and sign copies of After the Sands.