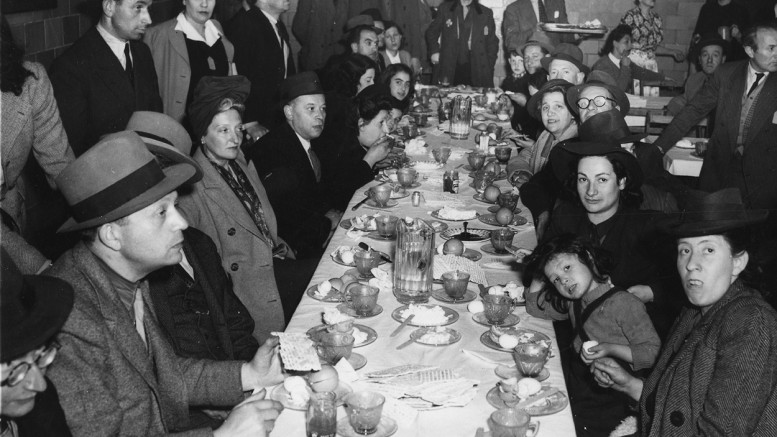 As young Canadian scholar Adara Goldberg began her PhD dissertation for the Strassler Center for Holocaust and Genocide Studies at Clark University in Worcester, Mass., she sought a moment of clarity in her interviews with Canadian Holocaust survivors and their families.

It didn’t take long to find that moment – in fact, it happened in her first interview, with Lola, a distant cousin by marriage.

“I was a little bit overwhelmed. She was telling me stories that I wasn’t necessarily at that moment prepared to respond to, and yet when we touched upon this issue of coming to Canada, and what life was like for her, and how the community […] responded, and she replied that ‘we were called greenies, what more do you need to know?’” Goldberg said.

“Greenies” was a derogatory term used to refer to new Jewish immigrants after the Second World War.

In a small gathering at McNally Robinson Booksellers last weekend, the University of Manitoba Press launched Goldberg’s book Holocaust Survivors in Canada: Exclusion, Inclusion, Transformation 1947-1955, a comprehensive account of the experience of the 35,000 Holocaust survivors who immigrated to Canada in the decade after the Second World War, based on her dissertation research.

The book was written on the basis of over 100 interviews with Holocaust survivors and their families all over the country, all conducted by Goldberg. She wrote the book while simultaneously working as the education director for the Vancouver Holocaust Education Centre.

What Goldberg found were distinct commonalities in the experiences of Holocaust survivors across Canadian regions – notably, a pervasive sense that survivors were outsiders even within their own communities. It was not until the subsequent build-up of Jewish community supports and government social services that this sense of isolation eventually abated.

“When we are talking about survivors who came to Canada in the first wave of immigration […] the sheer commonalities really were the fact that they were primarily young, they were able-bodied, they may have had a child or two, most of them born in the aftermath of the war, often in displaced persons camps,” Goldberg said, adding that this cohort was healthy and often had employable skills because Canadian immigration policy at that time prohibited entry for older Jewish immigrants as well as those with chronic illnesses.

“From late 1950 to 1955, which is where my study concludes, you find that this group becomes far more diverse. Many more people with larger families, older survivors who are coming to their children or to other relatives. You also had people who had experiences of resettlement, the people for whom Canada was not the first stop in trying to build a life, so the group really becomes much larger and much richer at this point. And this is also something that isn’t reflected very well in much of the literature on the subject […] we only really talk about the young able-bodied, for the most part.”

The two waves encountered very different Canadian contexts, with the first wave largely arriving in the midst of a post-war economic and labour boom in which able-bodied workers were needed, according to Goldberg.

“This is why, when we think about the generosity of Canada opening its doors to post-war refugees, we need to be careful not to romanticize this moment – Canada needed workers. These were skilled labourers, they were young, they would pose a minimal threat to Canadian society and national values,” she said.

This first wave could only come to Canada in one of three ways, according to Goldberg – either as labourers, war orphans through the Canadian Jewish Congress-administered War Orphan Project, or through sponsorship by a close relative in the country.

Among Goldberg’s most important discoveries in archival research was a report conducted by Mary Palevsky, a former caseworker with the United Nations Relief and Rehabilitation Administration.

The report revealed that social services and community support for first-wave immigrants was sorely lacking.

“Confronted by the need to extend its limited resources to meet the urgent and almost unlimited needs of the immigrants, the program collapsed at pressure points and emergency measures had to be improvised from day to day,” the report states.

But after 1950, with the expansion of immigration law to permit the arrival of more Jewish immigrants, government social service provision was stronger and the Jewish community was larger and more prepared for new arrivals.

“They came to social services that were more developed, social workers who had better training, and also organizations and communities that had a better sense of the distinct needs of this particular immigrant group,” Goldberg said of the second wave.

“Where they did struggle differently was that, in this delay, in these few extra years, they had already tried to resettle in many cases at least once and those hadn’t necessarily been successful attempts, coupled with the fact that many of them were a bit older, it was a different experience […] They really did encounter a different Canada and a different Canadian Jewish community than their brethren had even three or four years earlier.”

Given the current Syrian refugee crisis roiling Europe and the Middle East, culminating in the image of young Alan Kurdi’s body washed up on a Turkish beach, Goldberg believes her book can potentially inform current Canadian immigration and refugee policy, or at least act as a cautionary tale.

The restrictive immigration and refugee policies of the Canadian government during the Second World War prevented the country from saving as many lives as it could have, she said. Moreover, the eventual immigration and successful integration of Holocaust survivors in the decade after the war reveals the profound contributions refugees can make to Canada’s social fabric.

“About 5,000 Jewish refugees did come to Canada between 1933 and 1945, but most of them came in by chance, they came in accidentally, others came in under false guises […] what we could have done was save more people,” Goldberg said.

Our government is not responsible for the death of 6 million Jews, but had the decision been made to broaden our immigration requirements, surely more people could have been rescued before the start of the Second World War at the very least, so what that reminds us today is that we do have a choice, and we know what can happen when we ignore warning calls.”

In the spirit of Halloween

From jail cell to the mayor’s chair