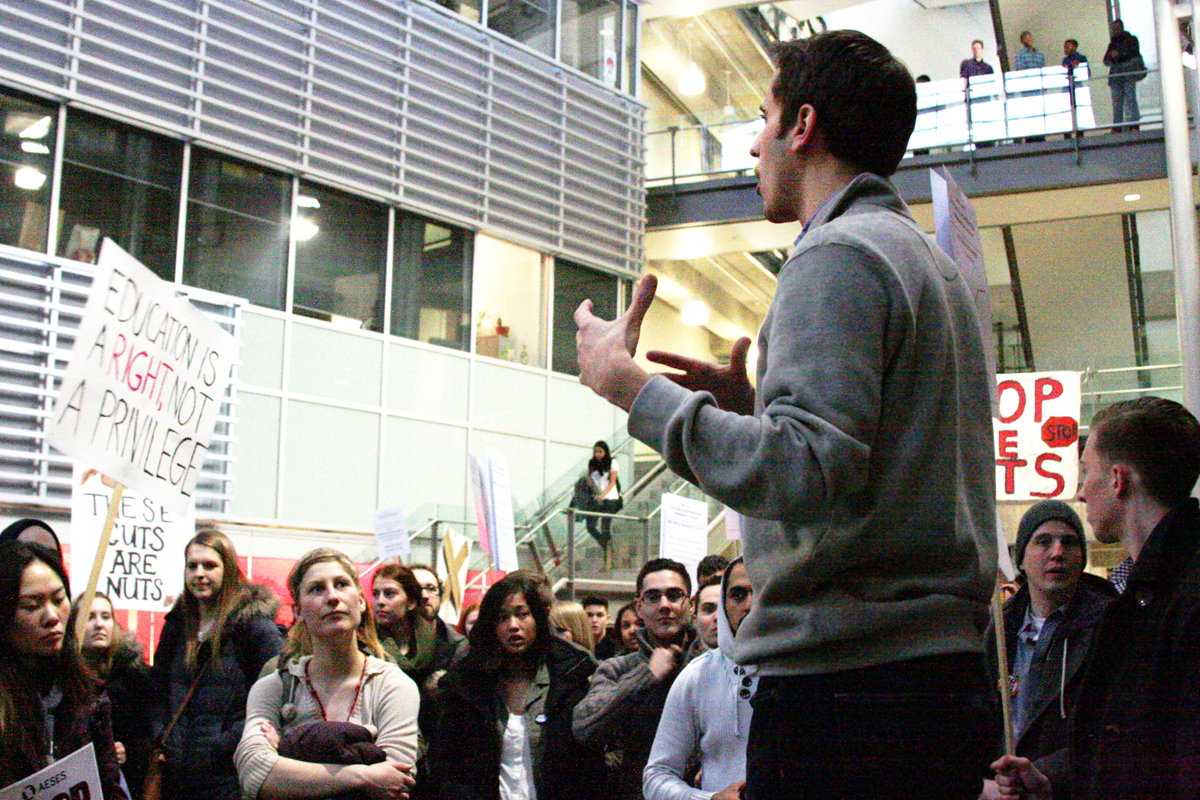 Early last week, hundreds of people gathered in the Engineering Atrium to rally against the proposed University of Manitoba budget cuts.

The rally was held outside the Alan A. Borger Sr. Executive Conference Room, where the University of Manitoba Board of Governors was holding their regular meeting. Before the meeting started there were speeches from several organizers. Shortly after the beginning of the meeting, some students entered the meeting chambers as visitors, while the majority of the protesters set off on a march around campus.

One staff member from the Manitoban was admitted to the chambers for a portion of the meeting, but was not able to take pictures or recordings.

After the speeches were delivered outside the meeting chambers, the protesters marched around Chancellor’s Circle. Marchers made their way up the staircase and into the corridors of Chancellor’s Hall—the Administration Building—exiting out a door on the other side of the building, heading towards University Centre, and back to Engineering.

Winnipeg Labour Council president David Sauer spoke to the Manitoban about the labour movement’s presence at the march.

“It’s a show of solidarity all-around. Austerity measures right now are being imposed all across the Western world, and frankly, I think the public is getting sick of it,” said Sauer, adding that cuts to education was a disingenuous route to bolstering the economy and institutions.

“Budget cuts are the worst. Education should be first,” the crowd chanted, marching towards the administration building.

The University of Manitoba faculty of environment is bracing for cuts, according to Shirley Thompson, assistant professor of the Natural Resources Institute. “They’re reorganizing, and talking about cuts, and everyone feels threatened, but also, people feel like their programming that has been built up is now being torn apart.

Niall Harney, political studies student at the U of M, spoke about his involvement with the U of M Student Action Network, saying that with wider, more consistent cross-campus efforts to spread awareness—from global political economic studies to the sciences—his group is hoping to garner mass student support against the cuts.

“We’ve mostly been running an education campaign, thus far, trying to get as much information about the cuts out to as many people as possible.”

Rally attendees carried signs that read, “It’s time to re-prioritize spending at U of M!” with graphs and information about the university’s capital expenditures and general operating fund net revenues.

Canadian Federation of Students-Manitoba chairperson Zach Fleisher cited UMFA accounting showing that, in 2013, the U of M’s return on sales—its net revenue divided by operating revenue—is 10.1 per cent, which is comparable to some for-profit corporations such as Canadian Tire (10.5 per cent) and Sobeys (3.4 per cent).

“We want education, not a corporation,” the crowd roared at one point during the rally.

While many protesters marched around campus, several other protesters remained at the board of governors meeting. However, the board conducts confidential business during closed sessions, which visitors are not allowed to attend. The visitors were asked to leave when the closed portion of the meeting began.

The marchers returned to the Engineering Atrium and the crowd dispersed shortly thereafter.