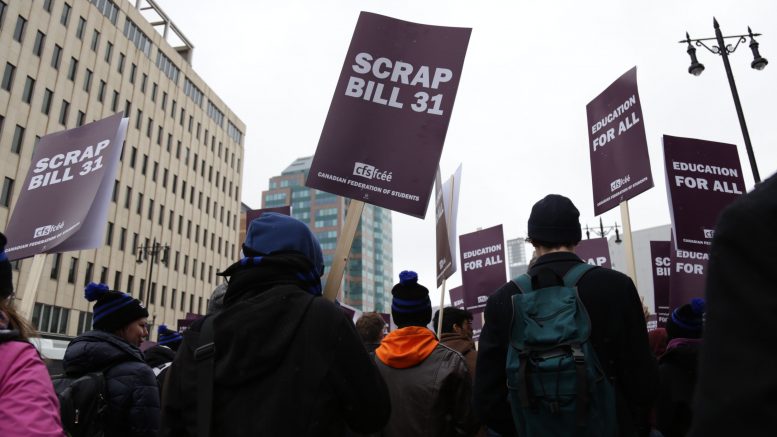 On Oct. 28th, Students marched to the Legislative building in opposition of tuition increase just weeks before Bill 31 was officially passed.

A recent report prepared for the Manitoba Organization of Faculty Associations (MOFA) reveals the impact of tuition fees on student enrolment, career preference, teacher compensation, and other factors.

Robert Chernomas, MOFA president and professor in the U of M’s department of economics, said the research – conducted by the Breakwater Group Worker Cooperative Ltd – was undertaken to review available evidence on best practices for approaching tuition policy and policies that affect access to post-secondary education institutions globally.

“We wanted to know whether it was true that some of the most advanced and equitable economies in the world also had the low or no tuition” policy, Chernomas said.

The researchers – Zac Saltis and Jesse Hajer – obtained and compared data from Organization    for Economic Co-operation and Development (OECD) countries, and presented a number of findings in the report.

The study reveals that although the demand for post-secondary education is not influenced by tuition changes among the OECD countries, to a certain degree the majority of the literature supports the argument that tuition increases negatively impact low-income students.

Chernomas noted that while tuition increases will not necessarily lead to a simultaneous decline in enrolment, low-income students will “be  less likely to go to university.”

Chernomas added that tuition decreases may also not lead to an increase in registrations.

The study pointed out that although Ireland eliminated tuition fees in 1996, this “did not boost working-class participation rates in higher education,” as factors other than tuition fees influence enrolment rates for low-income individuals.

Chernomas also noted that as tuition fees increase, students become more likely to seek employment in the private sector, in part due to the amount of debt accumulated by graduation.

“Students paying higher tuition also have the tendency to not go into public service,” he said. “They’re much more likely to go into the private sector because they’ll be paid higher, and that’s because they are going to have more debt from university.”

Chernomas detailed that as the public funding for post-secondary education falls, tuition fees increase to make up the difference.

“And so just like in this province, the Tory government is going to reduce its public funding to universities. The way it’s going to compensate for that, they argue, is by allowing tuition to rise.”

“So in the past, for example, in Canada, there [was] a great deal of more money coming from the public sector,” he added. “As the public sector is withdrawn in a period of austerity, then tuition has risen.”

The report also states that the proportion of students taking on loans, as well as the amount of student debt upon graduation, has a strong correlation to tuition increases.

Students in countries where tuition had been eliminated continued to accumulate debt, which Chernomas chalked up to other costs associated with post-secondary education.

“Those loans sometimes have to do with where students are going to live […] so borrowing money sometimes has to do with things other than tuition,” he said. “Tuition is important, but not the only variable.”

Chernomas said loans do not “create much of an incentive for low-income students” since they have to be paid back and this discourages them from attending university.

On the other hand, the availability of needs-based grants had the potential to increase enrolment.

The report also found a weak correlation between teachers’ salaries and tuition levels. The researchers found some indication that countries with higher tuition spend a smaller proportion of tuition collected on teachers’ compensation than countries with low or no tuition.

Chernomas said that even though tuition has increased in Canada, contrary to the claims made by universities that “one of the costs that’s going up is professors, libraries, and salaries,” a greater portion was spent on funding capital projects and administrative increases.

Chernomas pointed out that other countries exhibited a similar relationship and that the observation was not exclusive to Canada.

The researchers concluded that the consequences of the provincial effort to increase tuition up to five per cent annually, in addition to inflation rates, would be enormous, especially for low-income students.

The Advanced Education Administration Amendment Act passed its third reading earlier this month and will allow universities in Manitoba to increase tuition by five per cent annually plus the rate of inflation beginning in September. The act also lifts restrictions on course related fees.

The Progressive Conservatives aim to increase funding for the  Manitoba Scholarships and Bursaries Initiative funding from $9 million to $20 million in conjunction with the private sector to contribute two-thirds of the total target amount. So far, less than $2 million has been raised halfway through a year-long funding drive.

Chernomas said that to help low-income students offset the cost of post-secondary education and increase their enrolment, a number of better measures can be taken.