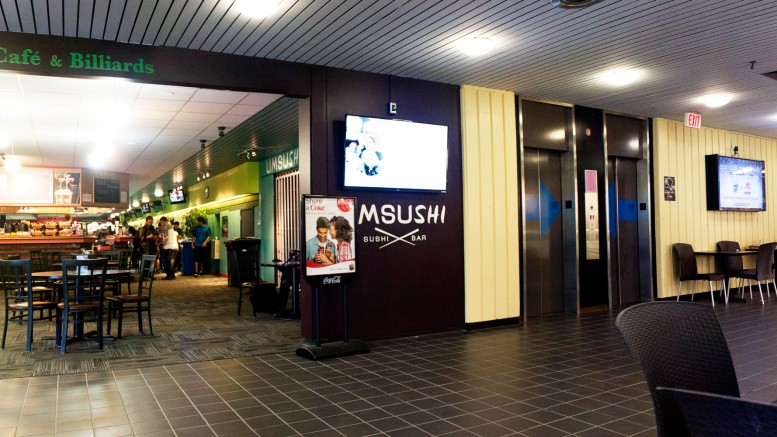 The University of Manitoba Students Union (UMSU) council authorized its executive to spend $1.4 million to renovate a spate of union-operated restaurants last week with an ambitious goal for the completion of the projects.

“Complete and full timelines have yet to be produced, but the goal is to be finished before my term ends,” said Jeremiah Kopp, UMSU president, stating that construction should be completed before May 1, 2016.

The renovation projects will all take place along one hallway of University Centre, branded “UMSU Street” by the union. The projects include expanding Degrees restaurant onto its outdoor patio space, creating a quiet study area near the Hub bar, and completely revamping IQ’s café and billiard hall.

“Amongst the fees students pay to the university and the students’ union, they pay their capital fund fee,” Kopp said.

“We want to take that money and use it to both improve the aesthetics of UMSU Street and make sure that it’s truly a world-class space where students can come to work, to play, to study, and truly enjoy themselves at university while also improving the finances of the union and increasing revenues to the union, which in turn can be put back into programming and advocacy.”

According to Kopp, the Degrees restaurant expansion is slated to convert the current outdoor patio, which is only accessible for a brief period throughout the year, into an indoor space. The union is expecting to increase available seating in the restaurant in the winter and as a result increase revenue.

The renovations will be completed without disruption to restaurant patrons, Kopp said, adding that the hallway will also be kept clear of construction material so that students can move freely through the corridor.

However, the IQ’s renovations will involve disruption of the café and billiard hall for a period of several months in order to remove the glass and pillars that currently separate the billiard hall from the quiet study space next door. This will open the IQ’s space up, creating one large business.

“IQ’s likely will be impacted for a few months over the winter, but for projects of significance like this sometimes you have to have some short-term pain for long-term benefit and gain,” Kopp said.

“This change needs to happen. It hasn’t been renovated since the 70s or 80s. It’s an old, anachronistic site that needs improvement.”

IQ’s will also offer new food and beverage options, with the potential for a Green Carrot Juice Company smoothie bar, which Kopp’s Your UMSU slate made central to its election platform. Food and beverage services will be on private contract with the union, with a planned request for proposals issued for the services.

“We’re going to go to request for proposals and invite lots of people to bid on what kinds of products they would like to see in there,” Kopp said.

The $1.4 million will likely come in the form of a loan credited to the UMSU capital investment fund, made up of funds collected through students’ capital fund fee on their tuition.

“The intention is to leave 80 per cent of this earmarked for the capital project that we’re undertaking and then leave 20 per cent over the next six years pegged for those improvements and maintenance,” Kopp told the Manitoban.

“The intention is to take out a loan, but where possible we’re going to borrow against our current assets like the endowment fund or the health and dental fund so that the interest that we pay goes back to the students union as opposed to an outside organization.”

We are more than the colour of our skin