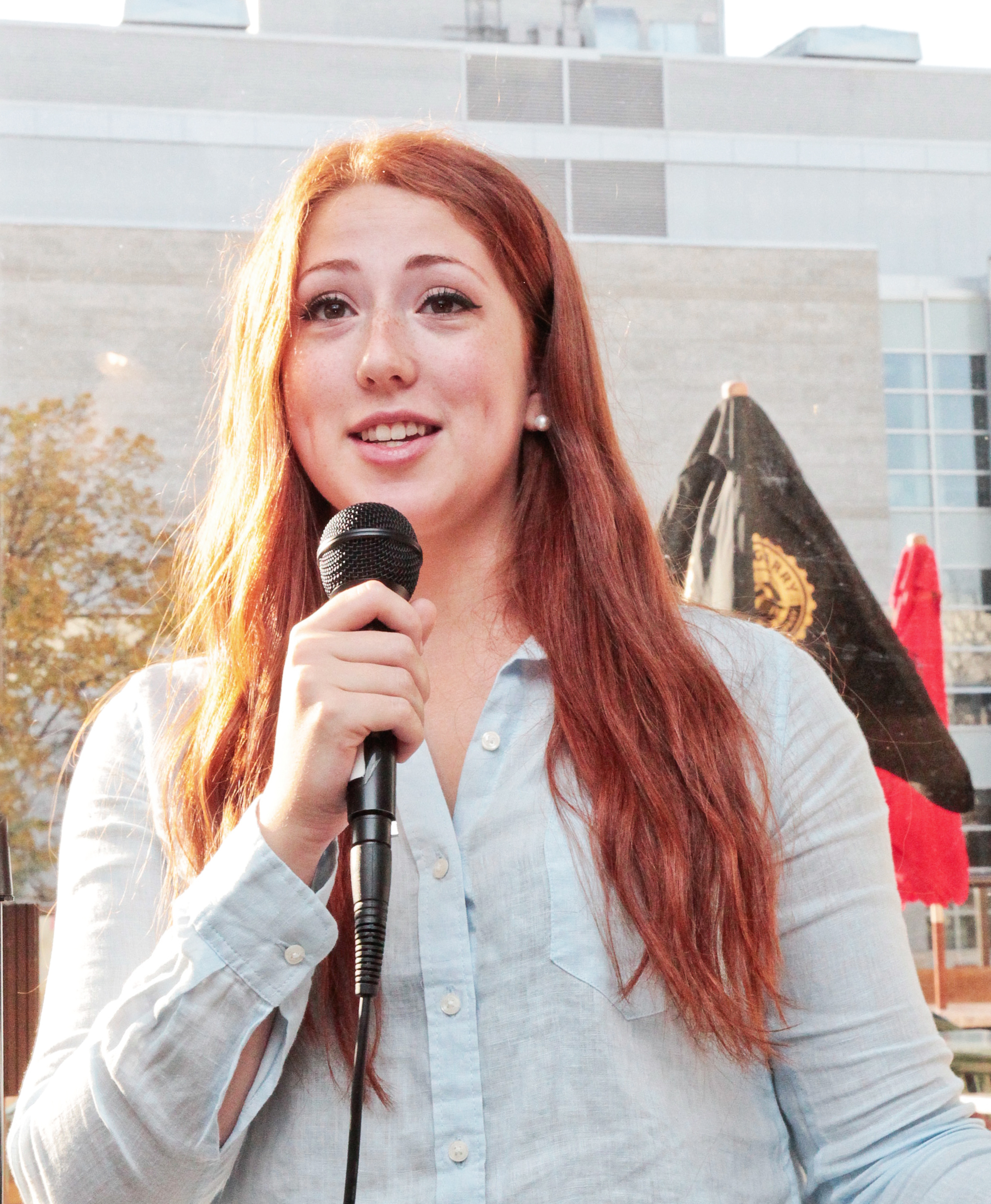 This past Thursday morning at Degrees Restaurant marked the launch of new campaigns aimed at addressing topics that UMSU identified as students’ top concerns on the University of Manitoba campus.

The campaign will be branded as “UM for U” and will branch out into three separate campaigns covering sexual assault, food options, and mental health.

It is one of three new movements—UM for U, UM for Us, Gen.UM—that UMSU will be launching this year driven by UMSU vice-president advocacy Rebecca Kunzman and vice-president internal Jeremiah Kopp.

The #NoMoreBlurredLines campaign to combat sexual assault is spearheaded by U of M student Wanda Hounslow along with sociology instructor Mary-Anne Kandrack – both members of the U of M Sexual Assault Working Group.

This particular campaign initiative is based on the lyrics suggested by Robin Thicke’s song “Blurred Lines”– a mantra the Guardian claimed to be “the most controversial song of the decade.”

“These [types of] campaigns are designed to create counter narratives on campus that not only challenge a culture which quietly accepts sexual violence, but also proactively engages both men and women in challenging the dominant discourses that equate masculinity with misogyny, femininity with objectification, and a good time with the inevitability of ‘Blurred Lines,’” Hounslow told the Manitoban.

Her hopes are that this campaign “will create a dialogue on campus that addresses immediate concerns of safety and safe space, as well as the broader cultural messages on campus that continue to perpetuate a culture of objectification and violence.”

These messages are typically not “as blatant as the Saint Mary’s chants that explicitly promoted rape and sex with a minor,” according to Hounslow.

“Messages that promote a culture of gender-based violence can be as subtle as promoting an event with posters and images that demean and objectify women, and as blurred as defining cat-calling or an unsolicited grope as harmless or even complimentary,” said Hounslow.

Driven by Hounslow and Kandrack, effective outreach and success of the #NoMoreBlurredLines campaign depends on collaboration from across campus, including the campus Sexual Assault Working Group, the Womyn’s Centre, Rainbow Pride Mosaic and active participation from students.

So far, the collective has delivered a series of public service announcements to the campus community and handed out free gum at Frosh Fest labelled with the slogan, “Gum is something you ask for” – a response to the dangerous “she asked for it” fallacy.

The #NoMoreBlurredLines campaign was developed with similar goals to other campaign initiatives at universities across the country, such as Don’t Be That Guy, I Know Someone, and White Ribbon.

Hounslow told the Manitoban that at some universities, the Robin Thicke song was outright banned. She wondered about the U of M’s stance on this.

Faculty, staff, and students across the U of M campus are working together, said Hounslow, to “shed light on the fact that when it comes to sex and sexual consent, there are no blurred lines.”

The second topic of UM for U was tackling the lack of food options on campus. The UMSU campus garden initiative was introduced at the launch by the garden co-ordinator, Cody Schuender.

The main goals of this campaign initiative are to improve “the availability of healthy, organic, affordable, and sustainable food options on campus and to publicize the garden,” Kunzman told the Manitoban.

Planning and development of the campaign involves people from the UMSU campus garden initiative and the campus food strategy working group, including one of the lead organizers, Julie Rempel, of the U of M Sustainability Office.

During his speech at the launch, Schuender spoke about upcoming changes to the garden as of this year, such as more visibility on campus and learning about different plants grown and food produced.

He said that the garden will continue to produce “healthy, local, organic food for Market Mondays,” which is a weekly event to promote the garden and sell produce, which in turn funds garden upkeep and co-ordination.

Despite a recent theft of garden produce, the UMSU campus garden team was looking forward to hosting the Harvest Feast for volunteers that took place over the weekend, organizing a seed saving workshop, and introducing a residence garden next summer for students who reside at the U of M all year.

Deborah Chan, U of M nursing student and one of the lead campaign organizers, introduced Active Minds as the first mental health group established on campus. Chan noted how surprising this was, considering that the “U of M is such an old university and one-in-four students will suffer from mental health issues.”

The Active Minds campaign is oriented to stop the stigma faced by those who struggle with mental health issues and that prevents them from seeking help.

From a nursing perspective, Chan spoke about why our definition of health must incorporate both physical and emotional health and how important it was to promote mental health awareness.

Kunzman told the Manitoban that UM for U is a “student-led grassroots approach” that works with top-down methods from administration, with UMSU “acting as a bridge between the two.” She said that the concept is based on students’ priorities that were determined by individual students who brought their ideas to UMSU’s attention.

One of the initiatives UMSU has committed to is creating and supplying posters for the Hub and Degrees that are related to responsible alcohol consumption and consent.

There are existing campaigns on campus to address issues of consent and sexual assault. The Canadian Federation of Students runs the No Means No campaign on both U of M and U of W campuses in co-ordination with service centres. Members of UMSU continue to pay fees to, and are still considered members of, the federation.

Zach Fleisher spoke to the Manitoban on behalf of the CFS about their campaign.

“The No Means No campaign aims to educate students about the dangers of sexual assault on campus while also actively works to decrease the prominence of rape culture on campus,” said Fleisher.

When asked how UMSU’s campaign against sexual assault differs from the CFS campaign, Kunzman explained that although their interests are aligned and their ultimate goals are the same, the #NoMoreBlurredLines campaign is unique in character, and was developed by students on campus.

Hounslow said that the No Means No campaign began decades ago as a response to sexual assault and violence. On the other hand, #NoMoreBlurredLines offers a different approach to this. Along similar lines of the Only Yes Means Yes campaign, #NoMoreBlurredLines takes a preventative approach that directly establishes that there are no blurred lines when it comes to sexual consent.

“How can we really determine whether someone said ‘yes’ or ‘no,’ either way?” wondered Hira Sabzwari, the Womyn’s Centre co-ordinator.

Kunzman said the UMSU campaign is “still in its infancy,” so it is not yet clear what types of preventative programs and campaigns it will include.

Sabzwari said that she “can’t really say what the end result of the campaign would be,” but looks forward to collaboration and hopes that it will have positive tangible results for the campus community.

Sabzwari told the Manitoban that she was invited to attend the campus sexual assault strategy by UMSU and Hounslow.

The UM for U campaign seeks to promote transformation about sexual assault and consent, food options, and mental health at the individual level. Together with the two other proposed campaign strategies—UM for Us and Gen.UM—Kunzman said she and fellow executive members hope to inspire change at the campus community level with UM for Us, and achieve long-term generational change with the Gen.UM initiative.

Salad days: A five-day experiment in the world of healthy eating