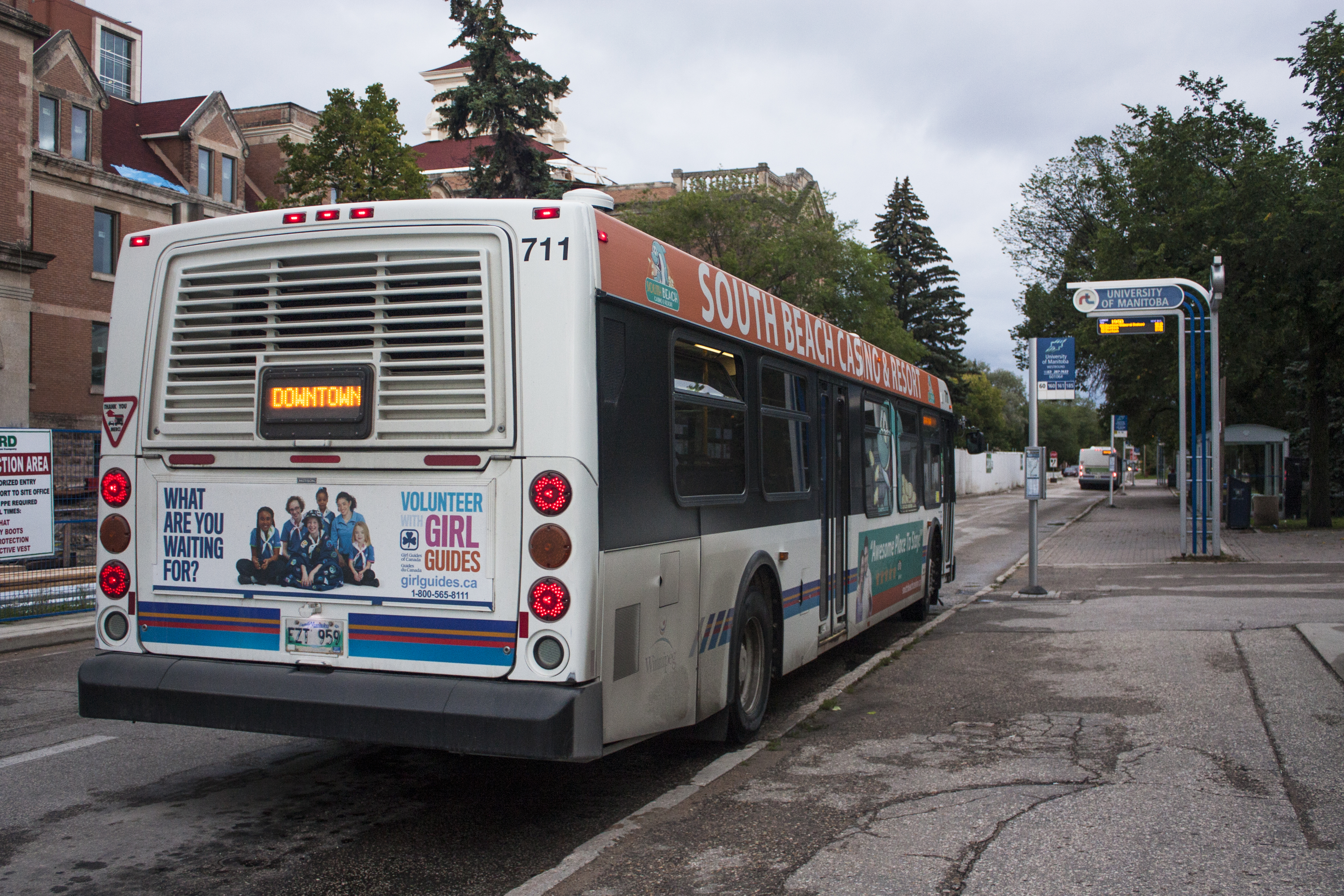 Members of UMSU and University of Winnipeg Students’ Association (UWSA) will vote this upcoming fall term on the universal bus pass (U-Pass) that could give post-secondary students access to more affordable transportation at reduced rates starting in the fall 2015 term.

The first referendum occurred in Nov. 2012.

At that time, former UMSU vice president advocacy during the time of the first referendum Jennifer Black stepped down from her executive position in order to campaign in favour of the U-Pass as a student and not as a student representative.

“A universal bus pass works to advantage the most disadvantaged students on our campus and provides greater access to education,” Black explained. “The U-Pass is a service that UMSU would provide students, like a mandatory U-Pass [ . . .] where all students would buy into a bus pass that would go from Sept. – Apr., dramatically lowering the cost of the pass for everybody.”

“Through collective purchasing and a subsidy from the government, students are able to receive these passes at a cheaper rate.”

The UMSU website states that the process for achieving the U-Pass program involves students showing interest in the U-Pass, meeting with Winnipeg Transit, holding a student referendum to provide evidence of student support, meeting with the government and stakeholders, formal approval of the U-Pass agreement, and implementation of the program.

Two UMSU executives’ terms ago, the U-Pass received overwhelming support from the U of M student body, with 74 per cent of students indicating their support for the program. Over 7,015 votes were cast, totaling 27 per cent of eligible voters, the highest voter turnout up to that point in 15 years.

This result meant that UMSU was given a mandate to negotiate a pass for $85 or less per semester.

Based on the process of negotiations, UMSU and UWSA executives did not achieve the intended rate to fulfill this mandate. The original plan has undergone changes between UMSU, UWSA, the City of Winnipeg, and Winnipeg Transit.

According to Black, who was actively involved in negotiating with transit, her focus was to maintain a fair price for students and push for service improvements that would make public transit more accessible and efficient for students.

Current UMSU vice-president external Christian Pierce told the Manitoban that UWSA president Rorie Mcleod Arnould and he continue to be involved in lobbying for the U-Pass.

Councillor Jenny Gerbasi and Mayor Sam Katz put forward a motion to include the U-Pass proposal in the City of Winnipeg operating budget at a price point of $260 plus inflation. On Feb. 4, 2014, the motion to support the U-Pass in principle was passed by City Council.

Due to cost changes since the initial referendum, the memberships of UMSU and UWSA will vote in referendums this fall to determine whether students still support the U-Pass at the price point of $260 for the eight-month academic year.

Fleisher noted that these changes were “statistically justified” because the new price is comparable to what other university students pay in Edmonton ($245.84), Calgary ($234), and at Simon Fraser University ($304).

The newly proposed cost is still much cheaper than present rates for students. Monthly student bus passes currently cost $67.75, which totals $542 over the academic year. With the U-Pass, students would pay $260 over the course of the school year, which equals $32.50 per month. This means a total savings of $282.

The University of Manitoba Graduate Students’ Association (UMGSA) held an informal poll among their student body that indicated 62 per cent support for the pass at the price of $260, with a 20 per cent turnout rate of its over 3,300 students across three major campuses in Winnipeg.

This was the basis of support for UMGSA president Laura Rempel to put forward the question of the U-Pass to the UMGSA executive.

The UMGSA has already been in contact with the City of Winnipeg and Winnipeg Transit. Rempel said they wrote a letter to Winnipeg Transit expressing their interest to be involved in U-Pass consultation, and for their student members to be included in the calculations for the program, assuming a successful referendum.

The motion at city hall only included UMSU and UWSA, and UMGSA sought to be formally considered in the calculations of students across the city that would receive the benefits of the U-Pass. Awaiting formal approval regarding their letter of intent, Rempel said that using graduate student numbers would “not make a big difference in executing the plan by Winnipeg Transit.”

Pierce added that the inclusion of UMGSA could potentially drive the price down.

At their last executive meeting, the UMGSA executive passed the motion.

Executive support was granted, and on Wednesday, Aug. 27, the executive presented about the U-Pass to their council. Rempel said a vote was held, and the idea was well-supported.

The next steps for UMGSA in terms of negotiations on campus are to work with the elections committee, hire a Chief Returning Officer (CRO), and collaborate with UMSU and UWSA to determine a referendum date.

More specifically, Rempel stated their intent to work together to develop a consistent referendum question to pose to students.

Neither UMSU nor UMGSA executives have taken an official stance on the U-Pass. Both are working to inform the student body so that voters can make their own fully-informed decision upon hitting the polls this fall.

Rempel and UMSU vice-president internal Jeremiah Kopp informed the Manitoban that their mandates state that the executive must maintain a neutral stance. They would be required to step down from their executive positions if they chose to advocate for or against the U-Pass.

But the UWSA executive will be actively supporting the U-PASS because they believe it is in the best interest of students, according to Mcleod Arnould.

On Aug. 14, 2014 the U-Pass Coalition held a meeting at the U of M. The coalition consists of students and community members (including representatives from the Manitoba Eco-Network and the Canadian Federation of Students-Manitoba) taking a two-pronged approach to achieving more affordable and accessible public transportation for students.

At that meeting, Kopp cautioned that, as far as the UMSU executive is concerned, any campaign or organization external to UMSU operating on the U of M campus and advocating for the U-Pass would be shut down quickly, reiterating how important it was for UMSU to remain officially impartial to the plan.

The U-Pass referendum will adhere to strict UMSU election bylaws and policies accordingly. Kopp said that supplementary rule changes are underway that would solidify the executives’ emphasis on neutrality. These changes would be implemented prior to the campaign period and may impact the campaign environment.

Kopp said that if these changes are approved, they might be enacted retroactively. However, the ability to enact new bylaws and policies in this manner has not yet been verified.

He also pointed out achieving the U-Pass is a process of “negotiating while advancing.” Raising the question of transportation issues is not just a student issue, and thus requires further negotiations with transit regarding providing subsidies for public transportation.

Mcleod Arnould explained that existing literature about the U-Pass is extensive and lays out a lot of the benefits, including environmental benefits to the city and the social benefits of having more transit users.

The U-Pass referendum date has been set for Oct. 27-29 at the U of W. The dates have not yet been confirmed at U of M. However, Pierce said that UMSU seeks to coordinate the voting period with UWSA.