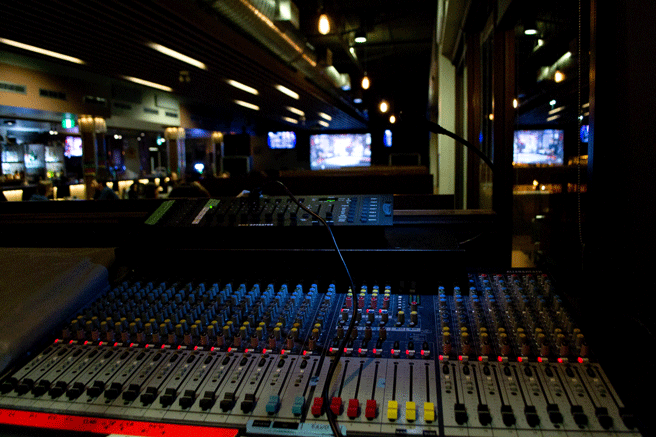 Inside the Hub. Photo by Chantal Zdan.

The University of Manitoba Students’ Union (UMSU) is turning a profit on its campus bar, the Hub, for the first time since its inception, but not all UMSU councillors are pleased with the union’s cost-cutting measures.

The union estimates the Hub made $23,000 last month and is on pace to break even this year, despite past financial losses.

Brandon Whyte, the Hub manager who was hired last November due in part to his extensive experience in the restaurant industry, credits the success to menu changes as well as the decision to close the pub during the summer months when regular patrons are hard to come by.

“We were closed for the summer, so I had the whole summer to plan everything from marketing to a basic strategy,” Whyte said.

“I didn’t reinvent the wheel as far as hospitality goes […] I basically incorporated the simple idea of cutting costs and increasing prices a little bit and increasing revenue.”

The Hub has made other changes to ensure that it moves away from its previous financial position, where it was consistently a money-losing enterprise for the union.

According to Zach Leclerc, vice-president internal for UMSU, these changes include more efficient scheduling for staff in order to correspond with peak hours at the bar as well as streamlining the food menu.

“[Whyte has] adjusted staff scheduling for part-time and full-time staff, because aside from the cost of purchasing the goods, that is the next largest budgetary expense,” Leclerc said, adding that the menu changes have also made a huge difference in terms of expenses.

“Some of the food that was being purchased last year was more expensive but you could argue was necessary for the menu type that we had […] We just had to recognize that the Hub is a bar, it’s not Degrees 2.0, and we needed to bring the food back to a place that was more pub-style and cost-effective for that kind of setting.”

Leclerc told the Manitoban he is confident the Hub will turn a profit this year but added that the primary goal is to ensure it loses significantly less than it did last year.

“Overall, this year we’re going to do significantly better than last year, that is our goal,” he said.

There have been some changes to the core group of UMSU restaurant businesses in the past year, including the addition of UMSushi, which takes the place of the former privately owned Global Bubble Tea. The slate of UMSU restaurant businesses are all concentrated on the third floor of University Centre, which the union has branded UMSU Street. These restaurants include the Hub, Degrees restaurant, IQ’s Cafe and Billiards, and UMSushi. According to Leclerc, all of these businesses are now turning a profit.

However, due to the re-opening of the private Aramark food services on the first floor of University Centre, the restaurants other than the Hub have been less successful than they were last year.

In September, UMSU council approved a proposal by the executive to borrow up to $1.4 million for renovations to its slate of restaurant businesses, including an expansion of Degrees restaurant to include an enclosed patio.

The money is also slated for massive renovations to IQ’s Cafe and Billiards. The wall separating the quiet study space from the billiard and cafe areas will be torn down in order to expand the business. The renovations will likely include the addition of a smoothie bar – a campaign promise made by last year’s Your UMSU slate.

But despite a promise made by UMSU president Jeremiah Kopp that renovations will be completed by May 1, 2016, UMSU has yet to secure financing or find a final contractor to begin work on the project.

Kopp refused to comment when contacted by the Manitoban. However, Leclerc remains confident that the renovations will be completed by the end of the executive’s term in May 2016.

“It is still the goal to have it completed by the end of our term in office,” Leclerc said.

“I know Jeremiah has a lot of drive, so I’m confident he will do everything he can to achieve the goal that he set and promised, and I’ll be backing him and helping him in any way I can.”

However, not all UMSU representatives are pleased with the management of the restaurants or the planned renovation project.

Andy Fenwick, UMSU’s students living with disabilities representative, argues that the union has lost sight of its true purpose by running their restaurants as private businesses rather than student services.

“It’s almost like we pay them at the beginning of the year, our union dues, to get them to run a business to make money off of us,” Fenwick said, adding that the renovation projects are inordinately expensive, purely aesthetic, and not geared toward improving services for students.

“This is way too much of our money going into an aesthetic project, especially when the businesses are charging us extra and lowering the quality to get more money out of us.”

Fenwick added that UMSU should be less focused on its businesses and more focused on campaigning on issues affecting students.

“I think the student union should be focused on advocacy,” he said. “Advocacy for classes, advocacy for better professors, lower tuition fees for domestic students and international students.”

U of M gets a C on sustainability report card