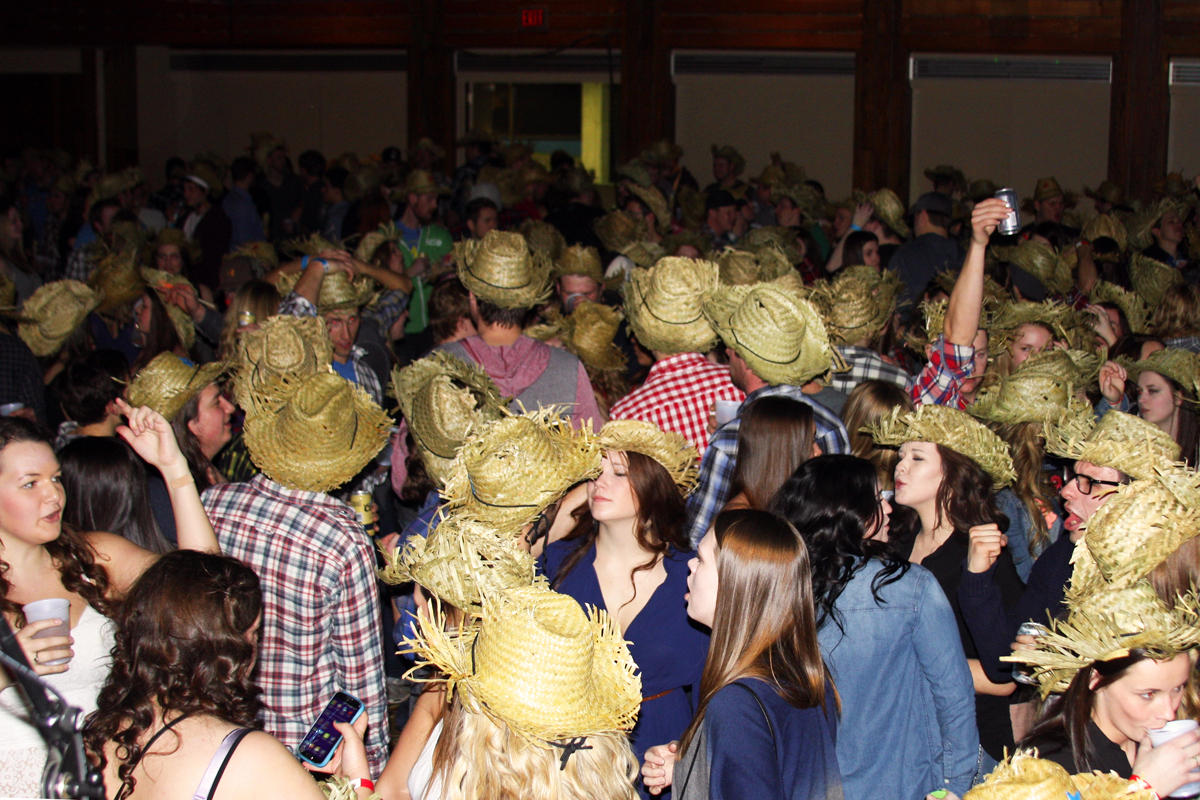 Photo by Craig Adolphe. Hoe Down.

The University of Manitoba Faculty of Agriculture Students’ Organization (FASO) hosted their annual Eat Y’er Hat Social on Friday, Jan. 9 as the wrap-up to their Hoe Down week, which they host to welcome agriculture and food science students back to school.

The event featured local band Jump the Clutch—a band comprised of U of M students, including students from the faculty of agriculture—playing to a sold-out crowd of 800, filling the multipurpose room on the second floor of University Centre.

Tickets for the event were $15 and sold out by Wednesday, Jan. 7 after going on sale on Monday.

She said she believed the high turnout out was representative of the high level of involvement by agriculture students in the faculty.

“The faculty of agriculture is a close-knit group,” said Dahmer. “For the most part people are very involved in the stuff that FASO puts on and are very loyal to their faculty.”

Hoe Down week, which ran from Jan. 5 to 10, featured a number of events in addition to the sold-out social.

Monday featured Hen and Cock Night at the Pembina Hotel.

Tuesday included a FASO auction at which students could bid on having FASO members do chores for them throughout the week; a hockey tournament between agriculture students and engineering students; and an evening bud, spud, and steak event at Area Nightclub.

On Thursday, FASO hosted a chili cook-off and quizbowl event during the day and an evening bar-night titled “Saddle Up!”.

Dahmer said that Eat Y’er Hat was by far the most popular compared to the other Hoe Down week festivities.

“All of the other events are smaller, most around anywhere from 50 to 200 people. But Eat Y’er Hat is definitely the biggest, just because it’s on the Friday, so a lot of people from out of town come in or past Aggies go to it,” said Dahmer.

Connor Fisher and Joseph Holtmann, faculty of agricultural and food sciences students, were both happy to be at the social.

“It’s the best social of the year,” said Fisher.

Holtmann said he had been particularly excited about the band.

Both Fisher and Joseph said that the majority of the people knew each other because such a large portion of attendees were faculty of agricultural and food sciences students.

Lindsey Brooks, third year faculty of agricultural and food sciences student, was attending the Eat Y’er Hat social for the third year in a row. “I really like it. I’ve been to it every year since I’ve been in university now so it’s kind of a tradition now.”