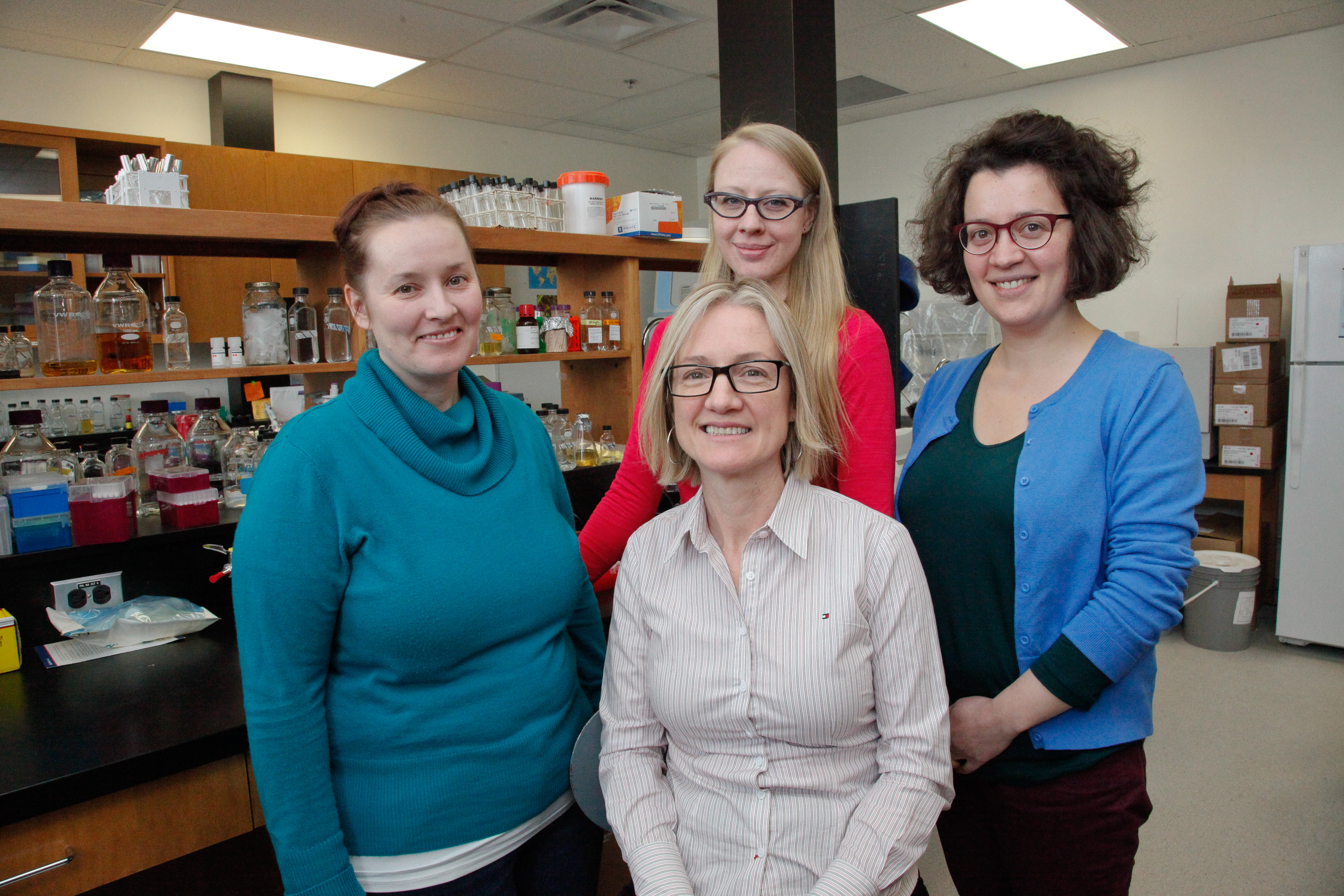 Silvia Cardona (centre front) with some of her team. Photo: Beibei Lu.

This week is International Women’s Week, and to observe the occasion, let’s take a look at women in the sciences at the University of Manitoba. In the spirit of helping to encourage women to participate and achieve success in the sciences, in 1996 the Natural Sciences and Engineering Research Council of Canada (NSERC) established the regional Chairs for Women in Science and Engineering (CWSE) program.

“[The CWSE program] helps remove barriers and encourage women to bring their unique perspectives and talents to bear on today’s challenging problems,” said NSERC President Suzanne Fortier in a 2011 interview with the U of M.

At that time, 23.3 per cent of professionals and academics in the sciences were women. This was a slight increase from the 19.5 per cent noted in 1987. Although there are more women in the sciences today, there is still a lack of gender equality. Programs like CWSE are important in trying to achieve that goal.

Since 2011, the University of Manitoba’s Annemieke Farenhorst has held the chair for the prairie region. A professor of soil science in the faculty of agricultural and food sciences at the U of M, Farenhost is described as a role model for women in a field that is still male-dominated. In 2000, Farenhorst was the first woman president of the Manitoba Soil Science Society (MSSS) since its establishment in 1957. Since her break of the long trend of male presidents, five other women have occupied presidential positions for the MSSS.

Traditional fields of study such as agriculture and engineering, as well as newer ones like computer science, have a tendency to attract more men than women. One of the goals of the CWSE program is to find out why such a lack in gender equality exists within these fields of study. As a regional chair of the CWSE program, Farenhorst is conducting research into the factors that influence women’s participation in the sciences.

Teresa de Kievit, associate head and associate professor of microbiology at the U of M, stated in an interview with the Manitoban that she thinks “women bring a unique perspective to the workplace; as such, they should be involved in all facets of the workforce.” De Kievit said she has always had a fascination with science. From as early as the eighth grade she had been encouraged to explore the sciences. Throughout her academic journey – which included the University of Waterloo, the University of Guelph (where she completed her PhD), and the University of Rochester in New York – de Kievit had great opportunities.

Throughout her career, de Kievit said she was “surprised to learn that the attrition rate for women in high-level scientific positions is high, largely because women are motivated by different parameters compared to men.”

In particular, Cardona told the Manitoban that “although both women and men are equally skilled for the scientific field, women are a minority at leadership positions.” She stressed that “women and men should occupy decision-making positions according to their capabilities.”

“If women are as capable as men, why is there a gender gap at the top- level positions in science?”

Cardona was also interested in science at a young age. She began her academic journey at the University of Buenos Aires in Argentina, and continued on to the University of Chile where she completed her PhD. “I am always blessed by my interaction with many female scientists, and I am convinced that they were key in shaping my career.”

Women account for 50 per cent of students in biomedical-related scientific careers, and perform as well as men throughout undergraduate and graduate education, said Cardona. “Much to my regret, women in science are far from filling 50 per cent of leading positions and the reasons are not always clear.” “We need to reflect upon this or otherwise we will lose clever minds and a more diverse perspective at positions that contribute to the scientific strategic planning,” she continued. “We need to find ways to encourage women so they realize they can have the vision, values, and courage needed to become leaders in science.” But finding gender equality in science is a struggle.

Cardona knows of women who were discriminated against in their scientific fields simply due to their gender. “The reason why this happens is the existence of stereotypes about women that operate in people’s minds,” she said. Cardona stressed the importance of events like International Women’s Week that bring attention to these important social issues. Raising awareness, Cardona said, “is a great way of maximizing human resource potential, and contributing to a fair society that can drive innovation and economic development.”

Materials that self-heal and shapeshift