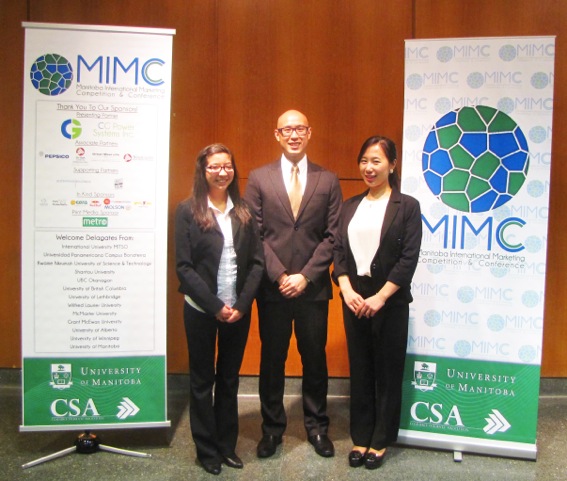 Thirteen teams from Canada, as well as China, Belarus, Mexico, and Ghana, endured a three-month, three-phase competition, culminating in a final round of presentations held from Jan. 10 to 12 at the U of M and downtown Winnipeg. The Ghanaian team was unable to attend the events in Winnipeg, however, as Sinan Leylek, executive co-chair for the competition, told the Manitoban. The team was reportedly stopped at the Ghana border.

“The past two years they were able to come, so we hope the problem is resolved in time for next year,” said Leylek.

In the first phase, teams competed from their home universities in an online simulation program known as Capstone.

Leylek explained that the simulation lasted eight weeks and every week was equivalent to one year in the life of a real company.

“The teams are given a marketing problem and must start out with a specific strategy statement in regards to how they’ll solve it. As time goes on, they are forced to add on to that strategy,” said Leylek. “The simulation covers a variety of different business elements.”

Within the simulation, teams compete directly with each other and can see their competitor’s progress, much like in the real world of business.

Phase two of the competition was worth 20 per cent of teams’ overall score and required them to articulate the specifics of their marketing strategy.

MIMC’s website states that the objective of the statement is to “evaluate teams’ understanding of their industry and its environment. The commitment made in the strategy statement will provide the context for the presentations to be held during the competition weekend.”

Teams arrived in Winnipeg for the third phase. In this live round of competition, groups presented their strategy statements, as well as their results in the simulated market, to a panel of three marketing expert judges “from the corporate and academic communities.”

According to MIMC, the third phase is meant to “evaluate each team’s understanding of its business environment and their ability to manage in that context.”

Participating teams were divided into three separate industries during the three phases of the competition. The team from each industry with the highest overall score moved on to Saturday’s final round at the Winnipeg Convention Centre.

The final round tested the best three teams’ on-the-fly marketing problem-solving skills. Each was given a new problem and only three hours to prepare a presentation on how to tackle the problem, which was again given to a panel of judges.

Historically, international teams have fared very well at MIMC. Leylek argued that this might be attributable to the fact that many of those teams offer the Capstone simulation as a class at their universities.

“My hope is to get the Capstone simulation approved as a class here at the U of M,” said Leylek.

“With UBC hosting JDC west, [Western Canada’s largest business competition], this upcoming weekend, it was clear that they had a great deal of practice and knowledge of how to prepare a case presentation going into MIMC’s final round,” Leylek said of the Global Champion team.

“Unfortunately, the addition of a business case competition to the final round put Mexico at a disadvantage as they had never done one before,” said Leylek.

The marketing conference running parallel to MIMC featured a variety of speakers, including a keynote address by Bill Shaddy, former senior director of personnel operations at Pepsico and former student of the Asper school.

The conference also included several social and dinner events. Following the conference and final round presentations, the four-day event wrapped up Saturday evening with a social organized by students at the Asper school.

“The addition of the conference this year serves as a huge networking benefit for competitors,” said Elizabeth Fahlman, director of IT and executive team member for MIMC.