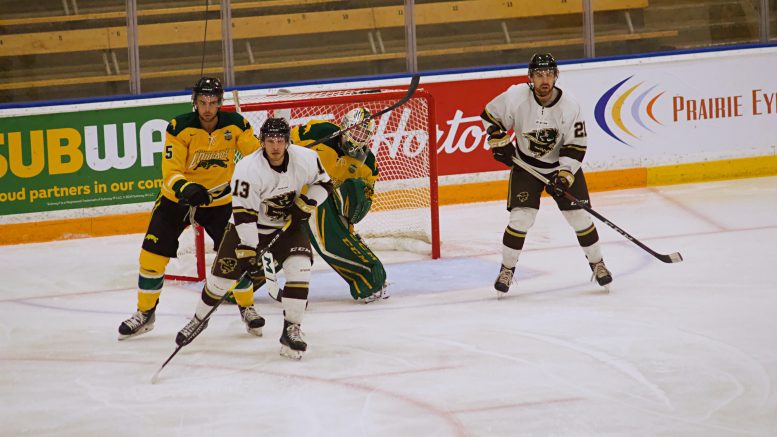 The University of Manitoba Bisons men’s hockey team has lost its chance at a Canada West playoff spot after two losses to the University of Regina Cougars last weekend, with the team going 0-4 on Friday and 3-6 on Saturday.

After a rough-and-tumble season, the Bisons were unable to muster a late drive to capture one of the six playoff spots.

Saturday remained a special night for the seniors with it being their last game at home. The seniors were celebrated for their accomplishments with the school and their team throughout the years.

Keaton Jameson highlighted the weekend with a three-assist game on Saturday. However, despite the achievement, the team didn’t have the weekend it had hoped for.

“We definitely did not have the weekend series that we wanted to have,” Jameson said.

“We had to win both games and we did not do that. I think our biggest problem was our defensive play. You’re not going to win too many games when letting in six and four goals.”

When looking back on the season, there were definitely some highs and lows for the squad. The biggest accomplishment of the season was the back-to-back win at home in a battle with the MacEwan Griffins. The team really stepped up in front of the home crowd and played their hearts out.

On-the-ice highlights are always a great accomplishment, but sometimes it is much more than that.

“The highlight of our season is definitely the group of guys that we have in our locker room,” Jameson said.

“We may have not did what we want to do on the ice, but the bonding between teammates has been great.”

This was the final home series for the Bisons.

The team will travel to Saskatchewan to battle the University of Saskatchewan Huskies on Feb. 11 and 12 in a back-to-back season-ending clash.

Arbitrator rules U of M must increase salaries for UMFA