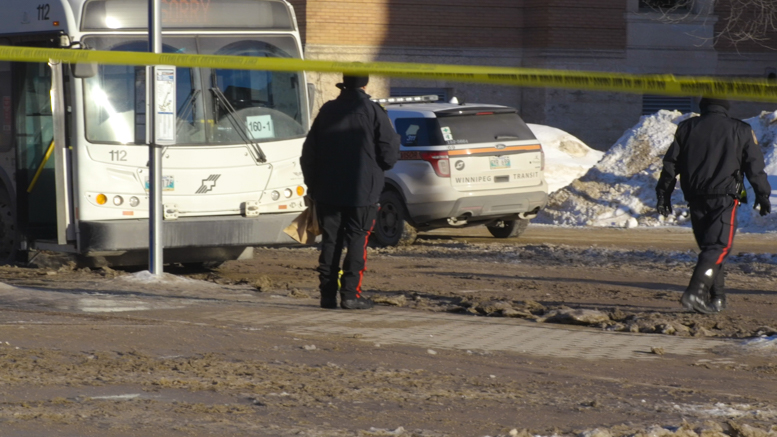 Questions about campus and transit safety in Winnipeg are being raised after the Feb. 14 killing of a 58-year-old Winnipeg Transit operator on the University of Manitoba Fort Garry campus.

Irvine Jubal Fraser was stabbed repeatedly in the early-morning hours by a passenger who refused to exit a bus at its final stop of the night on Dafoe Road, directly across from Taché Hall.

Fraser was transported to hospital in critical condition and later died as a result of his injuries. Brian Kyle Thomas, 22, was arrested trying to flee across the frozen Red River. He is facing second degree murder charges.

According to reports, Thomas has convictions dating back to 2012 for crimes that include weapons offences, assault, and robbery. He has been in and out of custody and was last on probation in November.

Fraser himself was facing charges of sexual assault and sexual interference at the time of his death. He was scheduled to face trial in January 2018. The trial was initially scheduled for October but Fraser failed to appear for jury selection.

Court documents reveal that Fraser was arrested in 2013 and charged with repeatedly assaulting a girl between 1982 and 1991. Fraser denied the charges.

On the Friday following the attack, a rally was attended by hundreds of transit workers demanding a safer work environment where they can peacefully do their jobs.

“I am concerned about the lack of safety initiatives that exist to meet the demands of today’s situation,” he said.

“The protocols, the response time, the support is inadequate on a day-to-day basis. We need dedicated police – part of the Winnipeg Police but dedicated solely to transit.”

He expressed concerns about the code of conduct for transit riders and the inability of the current transit inspectors – who he said are not adequately trained – to enforce its rules.

“We have the rider’s code of conduct but I don’t believe it is being enforced because the transit inspectors who we currently use to address those issues don’t have the ability to do anything,” he said.

“They don’t have the ability to arrest or detain individuals who may have infractions against the code of conduct.”

Callahan emphasized the need to secure the safety of both drivers and riders, noting a 2014 case where a driver suffered a broken nose after being punched in the face while driving a bus loaded with passengers.

“The safety of our members is only a part of it. What affects our members can affect the riding public,” he said.

“One of the fears that we have is that a possible worst-case scenario is if the driver has a bus full of people and he is in service and gets struck or knocked unconscious behind the wheel.”

The number of U of M students holding transit passes doubled in the fall of 2016 with the rollout of the universal transit pass, dubbed the U-Pass. More than 19,000 of the discounted passes have been issued.

Numbers provided by Callahan show that assaults on drivers reached a five-year low in 2014 with 39 attacks. Sixty-two assaults were reported in 2015 and 45 in 2016.

Callahan made a plea to commuters and users of public transit system to start a conversation with the city in a bid to seek better safety strategies.

“I think our riders need to contact their city councillors and say that they are concerned, too, and they want greater safety initiatives in place to protect both themselves and our members because we go hand in hand. I think that is very important,” he said.

“They need to hear it loud and clear that people want to use public transit but they need it to be safe for them to do so.”

Nimchonok said she started the campaign with the purpose of channelling the emotional response of the community into a positive venture.

“Because I am really involved in social media, I noticed that a lot of people were feeling a lot of things,” she said.

“They were very emotional about it and I knew that I was feeling very upset and I wanted to give students, and give the community of the University of Manitoba, an opportunity to harness what they were feeling and try and turn it into something good.”

She echoed Callahan’s concern that drivers need a safer environment to do their work.

“It did not make me feel unsafe, it made me feel upset. It made me feel sad and I was very upset that something like this would happen on campus,” Nimchonok said.

“I do understand the need for more safety for bus drivers,” she added. “I don’t feel unsafe as a student but if I were a bus driver, I will absolutely feel unsafe.”

Nimchonok stressed her belief in the fundraising campaign despite learning of the charges facing Fraser at the time of his death.

“My feelings did not change,” she said, noting that the money raised is for the family Fraser left behind.

“I am very sorry that she [the alleged victim] would not get the justice that she deserves through a court of law because they did not end up going to court,” she said, “but he left behind a wife and a granddaughter who have already faced a lot of tragedy in the past year and my main goal is to lighten the burden for them.”

Japanese exchange student Yuto Takada said he was shocked to learn about the incident and feels the campus can be dangerous during the night.

“I am from Japan and it is [a] safer place compared to Canada. I feel the campus is safe but overnight it is so dangerous, so we have to be more careful.”

Sridhar Majety, an electrical engineering graduate student who recently moved to Winnipeg, said he had seen the driver on campus a few times previously and was disappointed to learn an attack occurred on campus.

“When I moved here, everyone said ‘downtown is not a safe area, the university area is pretty safe.’ I was surprised to see that such an incident happened in the safest place in Winnipeg,” he said.

“It was not like it happened behind walls or something – it was like the centre of the university… It is really sad.”

More than the sum of its parts