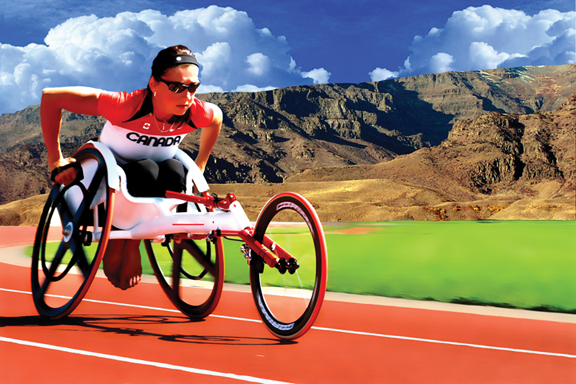 Over a span of three days in late January, at the Summer Down Under series in Australia, Winnipeg-born wheelchair racer Michelle Stilwell broke three world records, including two of her own. With mere months until the 2012 Paralympic Games in London Stilwell is performing at her highest level ever as an athlete. But the 37-year-old is familiar with success and setbacks.

After a piggyback riding accident at the age of 17, Stilwell sustained a fracture to her C7 vertebrae, which left her with no leg function and limited function in her arms. Already an athlete before the accident, Stilwell started competing in wheelchair basketball in 1994. She eventually became a player with the Canadian women’s national team and played in the 2000 Paralympic Games in Sydney. The Canadians, including Stilwell, defeated the host Australians for the gold medal. However, Stilwell’s basketball career ended shortly after, due to a herniated brain stem.

Undeterred, Stilwell decided to take up wheelchair racing in 2005, and began her meteoric rise in the sport. She quickly became an elite racer, competing with a T52 classification (quadriplegia with partial hand control). At the 2006 IPC World Championships in the Netherlands, she won gold in the 200m and silver in the 100m.

Stilwell’s greatest moments as a wheelchair racer came during the 2008 Paralympic Games in Beijing. They almost didn’t happen. In March of that year, Stilwell had to undergo surgery to treat a cyst on her spinal cord. Seven weeks later, she broke the 100m and 200m world records in a meet in Switzerland. Months later in Beijing, she won both gold medals in Paralympic record times. In the 100m race, Stilwell, with a time of 19.97 seconds, defeated the silver medallist, Japan’s Tomomi Yamaki, by 1.03 seconds.

Success continued after the Paralympics, with Stilwell repeatedly bettering her own world records, and for that, she was named Canada’s flag bearer at the 2011 IPC World Championships in New Zealand. She won gold in the 100m, 200m, and 400m events as well as silver in the 800m. Based on these results, she is the odds-on favourite to win both the women’s T52 100m and 200m events at London this summer (although the T52 400m and 800m distances are offered for men in the Paralympics, they are not for women).

Off the track, Stilwell is an ambassador with the Rick Hansen Foundation and engages in public speaking, often at elementary schools in British Columbia. She is married and has a 10-year-old son named Kai. Throughout her athletic career, Stilwell has shown a work ethic that few possess. Her motto is, “Remove all self-imposed limitations — anything is possible with a positive attitude.”

Those are words everyone should live by.

Monkey off, buffalo on