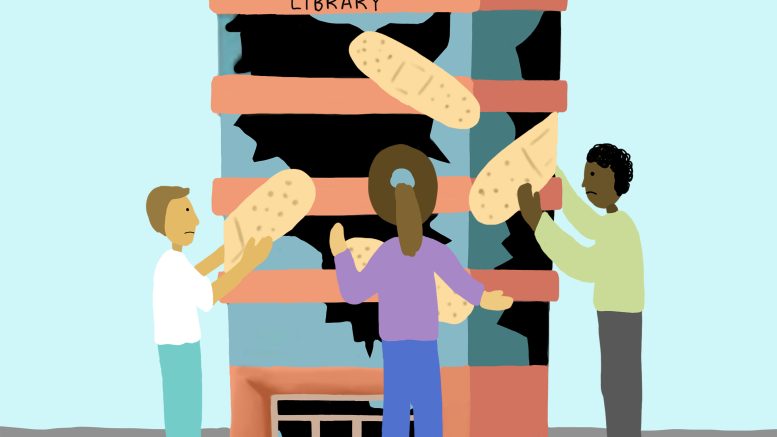 I didn’t always want to be a librarian.

Three years into university, I found myself working at a grocery store during the summer,
making salads and sandwiches.

I have always loved libraries — their atmosphere, their sights and sounds and their value
to the communities they serve. But it was there, in the persistent heat of a Manitoba
summer, amid the chafing of newly recommended face masks and customers insulting me
about chicken pot pies that it struck me: I wanted to join the ranks of some of the city’s most
necessary, and most under pressure employees.

However, the journey to become a librarian in Winnipeg comes with so many hurdles —
significant staffing shortages, cuts in hours and delayed programming, for instance — that I
started to wonder how we even have librarians at all in this city.

There are no schools you can attend in Manitoba to get a master’s degree in library and
information studies (MLIS). The U of M doesn’t even have a program for it, which is baffling
considering the wide range of programs it does offer, such as bachelor’s degrees in
women’s and gender studies and Indigenous studies, and even an archival studies master’s
program.

The closest thing you can get is at Red River College Polytechnic (RRC), where they offer
a two-year library information and technology diploma. This program is meant to provide
students with the necessary skills to be an employee in a library and related fields,
specifically as a library technician.

RRC is not currently accepting applications for this program as a full-time student, and it
hasn’t been for a while. It’s currently something you can achieve through part-time
continuing education, but if the classes you need aren’t provided during a term or are full,
you’re out of luck until they’re available in another term or even another year.

This makes it next to impossible for a full-time student on student loans while working two
jobs to apply. This knowledge is baffling when you realize that this is a city in desperate
need of more librarians, something clearly seen through the decline in librarians employed in
the Winnipeg School Division.

A Winnipeg Free Press article reported that there are currently only six librarians
employed in the division.

The work of a librarian, and the work of libraries in general, is often misunderstood.
Libraries aren’t just for taking out books or using computer spaces — they’re the last truly
free places in the city.

A library is where people can access a washroom, heat, air conditioning, internet, water
and knowledge without the barrier of money. Because of the low barrier to entry, libraries
attract a diverse range of people with a diverse range of needs. This turns librarians into not
just caretakers for too many copies of To Kill a Mockingbird, but essentially, to community
support workers.

But alongside the headlines at the Millennium Library are the quieter supports they provide
every day. Before its recent month-long closure, it hosted a “Community Connections”
corner in its lobby to help connect visitors with social services.

When I think of a library that supports people from all walks of life, from newcomers to
people experiencing homelessness, I think of the Millennium Library. The discussion around
how to make it more safe, brought back again recently after a 28-year-old man was stabbed
to death inside its lobby on Dec. 11, is constant.

The city is currently considering how to approach additional security measures for when
the Millennium Library reopens. The airport-style security measures implemented in 2019
were axed in 2020, after being poorly received by the community it served. To bring them
back would go against one of the main purposes of a public library: being for everyone.

This city needs to change its priorities. Library and information studies should be an easily
accessible program in Winnipeg because libraries serve our communities in countless ways.
Staff shortages need to be filled, librarians need to be paid fair wages and the safety of
library staff needs to be paramount.

I think if we invested in public spaces like libraries that serve their communities, had
affordable housing for our city’s unhoused and provided more wrap-around services for
those suffering from mental health and substance abuse issues, there would be less
violence at the Millennium Library.

It may sound outlandish to you, but if this city supported our communities the way
everyday people and librarians have had to, maybe things would be different.

All of this, from the lack of school librarians, to the continuous instances inside Millenium Library,
the inability to get an MLIS, in my mind all points to an even larger theme: Winnipeg does not
prioritize the well-being of citizens that they don’t see a profit in.